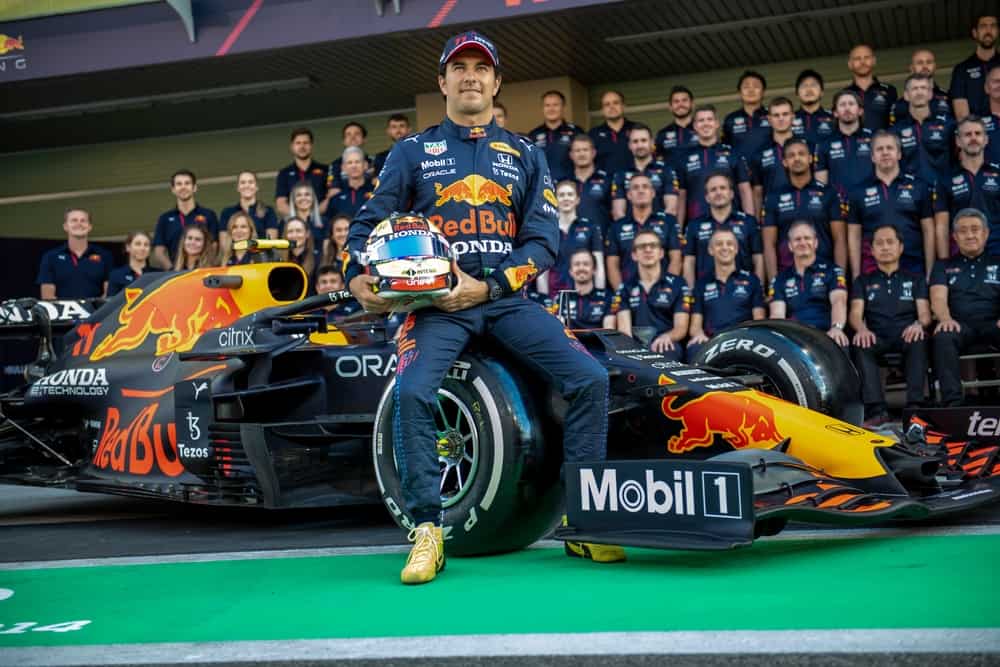 As the number two driver for Red Bull and having helped steer Max Verstappen to his maiden Formula One World Championship, Sergio Perez has become a household name. Here are twelve facts you may not know about Sergio Perez.

With a career spanning over 26 years since his success with karting at six years of age, Sergio Perez has built a name for himself both on and off the track. Let’s look at some of these lesser-known facts now.

1. Why Is Sergio Perez’s Nickname Checo?

For non-Spanish speakers, the nickname Checo may seem to have greater meaning behind it or perhaps an in-joke from Perez’s friends and family.

Alas, this confusion was cleared up by Sergio Perez himself in an interview back in 2013, asking the Mexican driver about his “unusual nickname.” Turns out, the story around it is a bit underwhelming:

“It’s not really that complicated or interesting. In Mexico, where I come from, all Sergios are automatically given the nickname ‘Checo Sorry, there’s no story behind it!”

So in the same way that Robert may be shortened to Bob, or how Richard is shortened to Dick in English, so it is with the names Sergio and Checo.

However, murmurs in the Red Bull camp from Max Verstappen suggest he goes by a different name, namely “The Minister of Defense” as a result of his stellar performance in holding back Lewis Hamilton at the 2021 Abu Dhabi Grand Prix.

While this may not have the same ring to it as Checo, there’s no denying the Minister of Defense will have plenty in store for the racing community come the start of the 2022 Formula One Season!

While drivers nearly always have compelling reasons for choosing which number to race under, they are usually subject to change throughout a driver’s career.

In this regard, Sergio Perez would be seen to buck the trend, as he’s been driving under number eleven for close to the entirety of his racing career. Going all the way back to his time as a kart driver!

The reason behind choosing number eleven stems from his love for soccer and his favorite team Club América, where his hero Ivan Zamorano played between 2001 and 2003.

Having scored 33 goals in his 63 appearances for Club América, wherein he won the Torneo de Verano in his first season, the Chilean striker established himself as a club legend in the number eleven jersey.

A number that Sergio Perez continues to honor and excel in to this day:

“When I started in karting there was a soccer player that was playing for Club América, the team I like, it was Ivan Zamorano. He was my idol and was wearing number 11, so it was very easy for me to choose that.”

There’s no denying that in order to succeed as a Formula One driver, sponsorship is needed in order to overcome the financial hurdles present when trying to reach the top of the sport.

Fortunately, Sergio Perez’s talent shone through, attracting the attention of Mexican billionaire Carlos Slim, who opted to sponsor Sergio Perez from his humble karting beginnings all the way up to Formula One glory. But how did this relationship begin?

Unbeknown to some, Sergio Perez’s family come from racing pedigree, with his father Toño, a professional racing driver turned promoter, becoming an essential figure in the training and support of professional drivers throughout Mexico.

As a result of Toño’s experience, he noticed Sergio Perez’s talent at an early age during his time in karting and approached Carlos Slim with an offer to invest in both his son and Mexico’s karting fraternity as a whole.

At this stage, Telmex was already sponsoring other racing divisions within Mexico and was looking to move into the international racing sphere with the support of Toño.

While it would take time to materialize from his initial meeting with Carlos Slim at six years of age, Sergio Perez would secure Telex sponsorship at the age of fourteen, which soon resulted in his placement at Germany’s Formula BMW circuit.

As a result of his success on the track, Carlos Slim and Sergio Perez have maintained both a strong personal and professional relationship, which in turn has proven beneficial to the two of them over the course of three decades!

4. What Teams Has Sergio Perez Raced For?

Over the course of his ten-year Formula One career, Sergio Perez has raced for five different teams (four if you include Force India and Racing Point as one team):

With only a one-year extension on his contract for the 2021 season at Red Bull, Sergio Perez will be made to work hard yet again to maintain his grip on the number two seat at the World Champion team.

5. What Other Careers Did Sergio Perez Consider?

Given his relationship with businessman Carlos Slim, it’s not surprising that Sergio Perz would have ambitions outside of racing in more executive spaces such as law and finance.

As a result of his fascination with the stock market and businesses as a whole, Sergio Perez has gone on record to say he would’ve considered a career in banking or law had he not become a professional racing driver:

“I would like to have been a banker or a lawyer. They both have a lot of adrenaline, similar to the stock market, and that’s what I’d say is similar to racing.”

Further to his corporate ambitions are Sergio Perez’s talents in other sports. In fact, as a close friend of Javier “Chicharito” Hernandez, he grew up playing soccer seriously and considered it as a potential career before committing to karting.

As the only Mexican Formula One Driver, it can be said that Sergio Perez is currently Mexico’s best professional driver (for formula racing cars).

His accomplishments include (but are not limited to):

While the jury is still out regarding whether Sergio Perez is the greatest Mexican Formula One driver of all time (although, statistically, he is) and whether he should be included in the pantheon of greatest professional Mexican drivers ever, there is no denying his stellar form in recent years.

Only time with tell if Sergio Perez can continue his winning ways and cement himself as the undisputed greatest Mexican driver ever!

While Sergio Perez may be good friends with Javier “Chicharito” Hernandez of Manchester United fame, it’s no surprise that his soccer loyalties remain homegrown, citing Mexico’s Club América as his favorite soccer team.

This is all the more pertinent when one considers that he continues to honor one of the club’s greatest strikers, as mentioned above, with the sporting of number 11 on his helmet in honor of Iván Zamora.

What is surprising is despite Sergio Perez not showing any affection toward Manchester United during Chicharito’s tenure at the European giant, he seems to have warmed to Chicharito’s latest club, LA Galaxy.

Consequently, Sergio Perez has cited the American soccer club as his “2nd team” in light of Chicharito’s transfer:

“Chicharito is also from Guadalajara, so we have friends in common. When he moved to Europe, to Manchester United, it was the same time as I started in Formula One. So, it was very nice that we started our careers together.”

Regardless of his affiliations (or lack thereof) to Chicharito’s club transfers, it’s evident Sergio Perez holds his soccer heroes and friends in very high regard!

8. Who Is Sergio Perez’s Brother?

As mentioned above, Sergio Perez comes from a pedigree of professional race drivers from Mexico, as is evidenced by his brother’s success in an equally prestigious racing division, NASCAR.

While it may be hard to believe, some would argue that Sergio Perez’s brother Antonio Mendoza is just as good a driver as Sergio Perez! As is evidenced by some of his statistics during his time as a professional driver:

Although Antonio Mendoza has retired and Sergio Perez is still racing, there’s no denying his brother’s success and perhaps a sign of even greater things to come from Checo come the 2022 season!

9. When Was Sergio Perez’s Best Season?

Sergio Perez’s best season in Formula One was the last season (at the time of writing), that being his fourth-place position with Red Bull racing in 2021.

During his tenure with Red Bull in 2021, Sergio Perez secured:

While the above three seasons all show Sergio Perez’s great potential, here’s hoping for more wins and podiums in the near future for his Formula One career!

10. What Is Sergio Perez’s Net Worth?

Being financially savvy and connected has its perks, as evidenced by Sergio Perez’s approximate net worth of $30 million!

While he stands as the fourth-best driver on the grid with a salary of $8 million at Red Bull for the 2021 season, his real investments seem to stem from his long-standing endorsements from Telcel and Telmex.

As devote Christians, both Sergio Perez and his wife Carola Martinez exchanged vows at a Christian wedding ceremony on the 3rd of June 2018.

The differing factor was the presence of Pope Francis, who blessed the wedding at their ceremony held in Guadalajara, Jalisco, in Mexico.

As the birthplace of both Sergio and Carola, this was without a doubt one of the defining and memorable moments of Sergio Perez’s life.

12. What Charity Did Sergio Perez Start?

Last but not least, the Checo Perez foundation was launched in 2012 in Sergio Perez’s hometown of Guadalajara, Jalisco, in Mexico.

Managed and presided over by its president Paolo Perez (Sergio Perez’s sister), the purpose of the foundation is to provide learning tools and support for differently-abled children.

Further to the above, the foundation has helped millions of Mexicans by supporting orphaned children, children’s homes, children living with cancer, and the construction of homes in areas struck by natural disasters.

Through a combination of familial love, hard work, persistence, and tenacity, the foundation continues to support the most vulnerable members of Mexican society and is testimony to the Perez family’s drive to help communities less fortunate than their own.

As one of Formula One’s most popular drivers, who pursues perfection both on and off the track, there is no doubt that Sergio Perez will continue to entertain, impress, and support those around him for years to come!