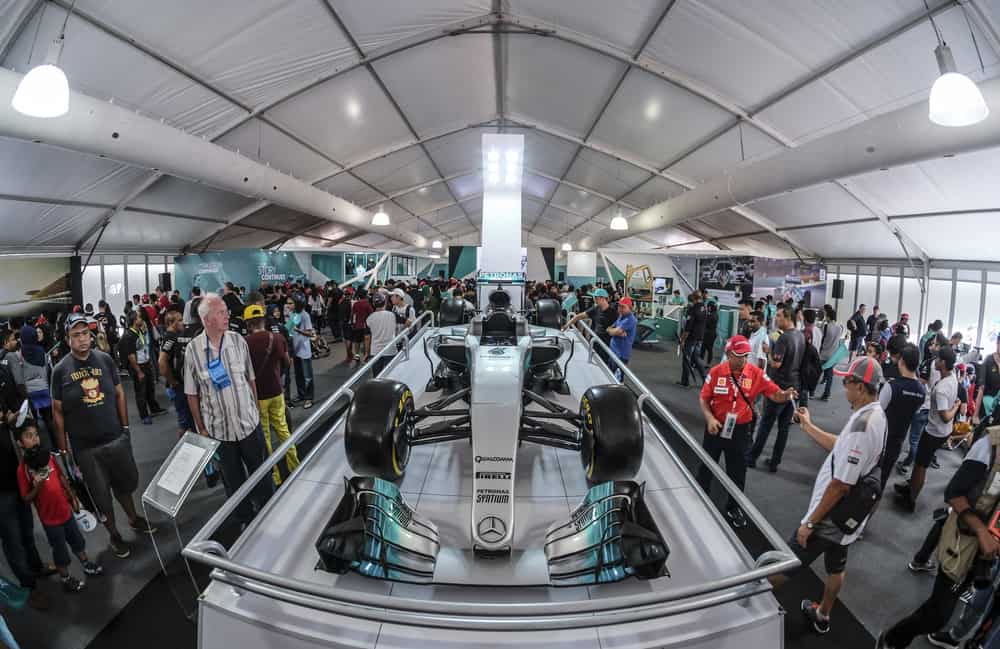 At the end of every Formula One era, regulation changes are made for the upcoming era. The current F1 era began in 2014 when Formula One switched to a 1.6-liter V6 engine from the previously used 2.4-liter V8 engine. These engine regulation changes, however, aren’t made without good reason!

At the end of every Formula One era, engine regulations are changed to suit modern racing technology. For the first time since 1989, Formula One has allowed the use of turbochargers again in the form of the V6 engine. This powerful and cost-effective engine is also the most fuel-efficient engine in the history of Formula One racing.

In this article, we’ll break down the history of the Formula One engine for you. By understanding the history of these engines, you’ll better be able to see how previous regulation changes have largely foreshadowed later engine changes. This will better allow you to grasp the various reasons Formula One decided to use V6 engines in their vehicles. Let’s get started!

Six years ago, in 2014, Formula One made headlines when they announced that they were overhauling the engines they utilized. For those who are familiar with previous F1 eras, these changes in motorsport’s regulations came as no surprise.

At the end of every Formula One era, regulations are changed for the upcoming season. Thus, when you consider the history of these F1 regulation changes, it’s possible to see certain developmental trends. In this way, the 2014 regulation changes – which are still being used today – have been foreshadowed by previous changes.

While the 2014 regulation changes made by Formula One were to be expected, that doesn’t mean that the fans supported this change. At least not in the beginning of the current F1 era. Mere months into the current Formula One era, fans were disappointed by the new engines being used.

Besides specifics of the technology and the cost thereof, one of the major critiques from fans was the very sound of the new V6 engines being utilized. Many believe that this switch to the V6 engine has resulted in Formula One losing their signature ‘sound’. Ultimately, this change in sound is due to the nature of the new turbo-hybrid engines.

The 2006-2013 era, which preceded the current F1 era, also saw several prominent regulation changes. One of the most major shifts during this era was the shift away from the previously used 3.0L V10 engines to the 2.4L V8 engines. These 2.4L V8 engines were powered by a simple hybrid system.

When the V10 engine was implemented by Formula One in 1995, it was due to the smaller size and lighter weight of this engine. Similarly, the 2.4L V8 engine implemented in the following 2016-2013 era was even lighter and smaller than its V10 predecessor.

The current era, which began in 2014, continued this trend, with Formula One shifting to 1.6L V6 engines. When you consider the history of Formula One engines, this comes as no surprise. If anything, this switch-up was bound to happen at some point, though not without good reason.

While the current era was slated to end in 2020, the era was extended due to the unexpected coronavirus pandemic. By considering the history of the engines used by Formula One, it is possible to see how previous regulation changes have shaped the current generation.

If you’ve recently become a Formula One fan, then this video from CYMotorsport on YouTube breaks down everything new fans should know about this motorsport.

A Brief History of Formula One Engines

Before we take a closer look at the current V6 Formula One engines, let’s take a brief look at the history of these engines. From the 1950 Formula One era to the current one, there have been many engine regulations and changes over the years. The tabulated timeline below seeks to highlight some of Formula One’s biggest innovations throughout the various eras.

If you’re interested in the history and evolution of Formula One engines throughout these different eras, then you can check out this video from Driver61 on YouTube. This is part of a YouTube series, Track Evolution, which looks at the outstanding innovations made by Formula One over the years.

Now that we’ve briefly looked at the history of Formula One engines, it’s time to focus on the current V6 engines that are being used during the current F1 era. Specifically, we will consider the reasons for this shift to the V6 turbo-hybrid era of Formula One from the V8 engines used in the previous era.

Earlier in this article, we looked at the history of Formula One engine regulations throughout the various eras. When Formula One made the switch from the 3.5L F1 engine to the 3.0L V10 engine, it was due to the lighter weight and smaller size of this engine. This trend continued with the even lighter and smaller 2.4L V8 engine, which was a simple hybrid system.

Following this engine progression, Formula One developed a more complex hybrid system in the form of the V6 engine. Many critiqued this engine, wondering why Formula One didn’t opt for a fully electric engine, as that is where the technology seems to be headed.

Once you’ve read the following reasons for the switch to the V6 engine, you’ll see that this truly is a natural progression of the engines used in this motorsport. It will also provide you with more insight into what can be expected from future F1 regulation changes.

When one considers trends in engine technology, there has been a shift towards electric engines. However, when it comes to professional motorsport racing, electrical engines are not quite ready to be used on the racetrack. The reason for this simply comes down to what the fans of Formula One racing expect from this motorsport.

The amount of energy and power that is needed for an F1 race – such as the 189.5-mile Grand Prix – cannot be sufficiently sustained by an electric engine as of yet. If Formula One were to prematurely switch to the use of electrical engines, they’d currently have to compromise on race speeds or even the very format of their races.

Given the uproar over the change in sound during races due to the introduction of the V6 engine, it is unlikely that Formula One would compromise themselves by switching to electrical engines before they’re truly ready to handle these races!

#3 It’s About the Technology of Today

As discussed above, electrical engine technology is not where it needs to be in order to be used by Formula One racers. Of course, this doesn’t mean that this technology won’t be used in the future. When it is used, the technology will be ready and current – much like the technology that powers the hybrid V6 engine.

For this reason, the technology needs to be updated periodically through regulation changes when one Formula One era comes to a close, and another begins. By implementing these changes when they do, F1 is able to ensure that their racers are able to master the technology of today.

In this day and age, it’s not just about current technologies but also about current issues we are all collectively facing. One such issue, of course, is the environmental crisis. Formula One’s shift to the V6 hybrid engine allowed them to become more environmentally conscious and remain relevant with eco-conscious F1 fans.

#5 It’s One of the Most Powerful Engines

This one is arguably one of the most important reasons for this shift from the previously used V8 engine to the current V6 engine. After all, we’re dealing with world-class motorsport here! While many F1 fans consider these engines quieter than previously used ones, the V6 engine remains a silent beast.

Despite the lack of Formula One’s signature sound, the V6 engine offers power figures that have not been seen since the F1 hay days. As mentioned earlier, Formula One banned turbochargers in 1989. The power offered by the V6 engine is only comparable to the turbocharged F1 80s. Not even the 3.0L V10 engine could match the power of the currently used V6 engine!

While the engine may not sound as powerful as those that have come before, they have more power than most of the F1 vehicles used since the start of the 90s. Basically, when it was introduced into Formula One, the V6 engine was the most powerful one the motorsport had seen in more than two decades.

Above, we looked at the need for Formula One drivers to utilize the technology of today. However, there’s another reason that F1 uses up-to-date technology, and it has to do with the number of car manufacturers that compete in Formula One.

Ultimately, for Formula One to remain viable and successful as a sport, they need the support of different car manufacturers. These manufacturers provide resources that are vital to seeing this motorsport flourish as time goes on.

Formula One Engines in 2022 and Beyond

In February 2020, Formula One announced plans to freeze the development of their engines between 2022 and 2025. The reasons for this freeze come down to the lower costs and sustainability of these F1 power units. Another major reason is Formula One’s shift towards carbon neutrality.

While engine development may be frozen for the foreseeable future, Formula One has made its objectives for the 2025 engines known to the public. When one considers these objectives, many of them echo the very reasons F1 made the shift to the V6 engine.

With the 2025 F1 power unit, environmental sustainability and fuel that is fully sustainable are at the developmental forefront in terms of key objectives. Other major considerations include a significant reduction in costs while remaining attractive to manufacturers of these power units.

While we wait to see how these objectives will shape the upcoming 2025 Formula One power unit, we can look at the history of these engines to give us an idea of how they will develop. At the end of the day, all changes need to be approved by the World Motor Sport Council, so only time will tell what the next power unit will have in store.

In this article, we looked at Formula One engine regulations and how this shift between F1 eras. In 2014, at the start of the current era, use of a 1.6-liter V6 engine was implemented into the sport. When one considers the history of these regulation changes and the key objectives of F1 engine development going forward, the reasons for these changes become evident.

Louis Pretoriushttps://onestopracing.com
Previous article
This Is Why Your Go-Kart Clutch Smokes
Next article
Can Formula 1 Drivers Wear Glasses?