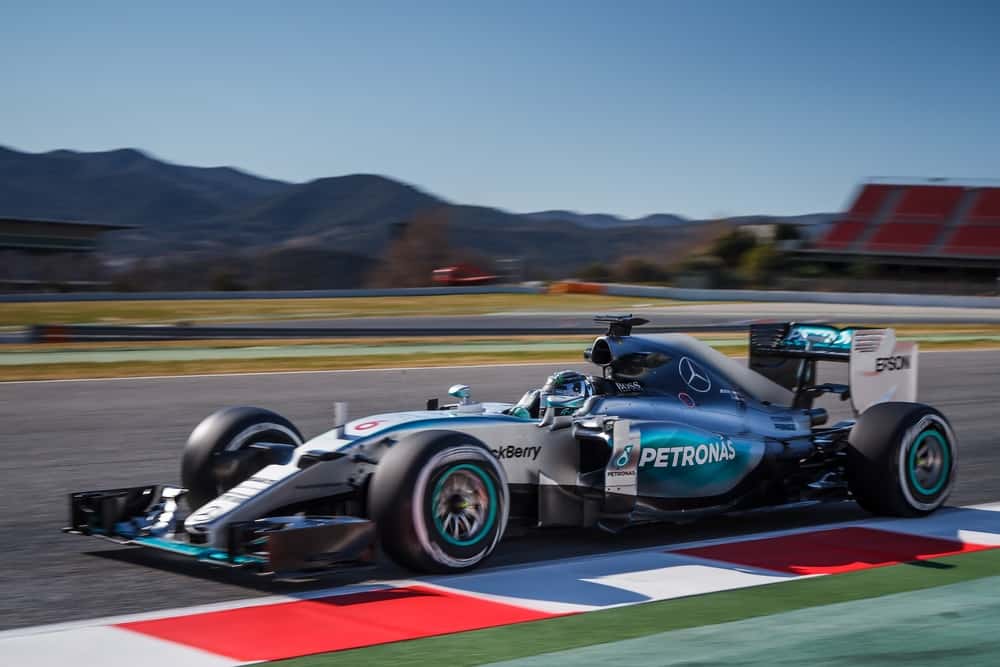 Over the years of F1, the cars have been equipped with various types of engines, each with its own attributes. The modern F1 cars are the most efficient they have ever been while also being the fastest F1 car iteration. This leads fans to wonder if the F1 cars are using hybrid engines?

F1 cars are hybrids. The F1 power unit makes use of kinetic and heat energy recovery systems to augment and increase the power output of the car while simultaneously increasing the efficiency of the car and reducing carbon emissions, making these cars incredibly powerful and efficient.

The power unit used in modern F1 cars delivers more performance than ever before. The engines that are used in these cars are a controversial topic among fans, but there is no denying the results that these engines produce. Let’s go a little deeper into the hybrid setup of modern F1 cars.

Formula 1 cars have historically had some of the most efficient engines in all of motorsport. The engines used in F1 are not the most powerful engines in the world, but when they are installed in an F1 car, they are powerful enough to be the propulsion behind the world’s fastest racecars.

The engines used in Formula 1 cars are something truly special and are unique in the world of motorsport. Every F1 car is equipped with a 1.6-liter turbocharged engine that is augmented with dual heat and kinetic energy recovery system.

The engine itself may be small compared to other racecar engines, but it is incredibly efficient, and with assistance from the energy recovery system, the engines used in F1 produce huge amounts of power.

This means that while F1 cars do not have electric motors, the use of electrical energy in the power unit makes F1 cars hybrids. Both heat energy and kinetic energy recovery systems are used in F1 car power units, with add several additional horsepowers to the engine and allow for an extra boost of energy to help drivers overtake on the track.

Formula 1 cars are hybrid vehicles, but not in the conventional sense of the word. These cars do not have electric motors, nor must they be recharged in any way, but they rather make use of energy that accumulates while braking and heat energy from the exhaust system and convert that energy into usable power for the engine.

Have F1 Cars Always Been Hybrid?

Formula 1 has always been a very tightly regulated sport. The engines that are used in the vehicles are part of these regulations, and every F1 car must have an engine built to exact specifications.

The engine used in F1 has not remained constant over the many years that F1 has taken place, but every year poses a new opportunity for teams to produce better engines, and the regulatory standards of the engines used in F1 cars may change at any point.

This means that there Have several varieties of engines used in F1 cars since the inception of the sport in the 1950s. Formula 1 cars have not always been hybrid vehicles. The regulations of the sport changed in 2014, which forced the teams in F1 to reduce engine size from 2.4 V8 to 1.6 V6.

However, this reduction in engine size also came with regulations that allowed teams to install energy recovery systems into the power units of the cars. Every team took advantage of these regulations and used the opportunity to hybridize their engines.

Since 2014 every F1 car on the grid has utilized a hybrid power unit and uses the energy recovery systems to draw as much power from the car as possible.

How Powerful Are F1 Hybrid Systems?

The power unit in F1 cars combined with the hybrid energy recovery systems combines to form a very powerful system for powering the F1 car. We all know that F1 cars are very powerful machines, but how much power do these hybrid F1 power units generate?

The 1.6-liter V6 engines are used in modern Formula 1 cars in combination with the energy recovery systems installed to generate more than 1000 brake horsepower. Generating this amount of power from a small 1.6L V6 engine is staggering and proves how well-engineered the engines in F1 are.

The Formula 1 power unit used in 2021 is among the best ever used in the sport, and I the most well-engineered engine in all of motorsport. Using this type of engine brings along some serious advantages that allow F1 cars to be as good as they are. Let’s examine some of the advantages of F1 hybrid power units.

Another aspect of the efficiency of these engines is the fact that they are incredibly fuel-efficient. These performance engines are designed to operate at full capacity for the entire F1 race and do not burn through an entire tank of fuel.

F1 cars do not refuel during the race, and the engines do not use all of the fuel available in the tank. This is incredibly impressive.

The engines used in modern F1 also have incredibly low carbon emissions compared to other racing engines. This s the main reason why the F1 engine regulations were changed to include hybrid capabilities and to make the engines smaller. The F1 engines of the past were very environmentally damaging, but the modern engines are much more environmentally friendly.

At the end of it, the biggest advantage of using these power units is the immense amount of power and torque that these systems produce. The hybrid systems produce fa more power than the engine alone would be able to produce, allowing the cars to race at much higher speeds.

Formula 1 cars are hybrid racing vehicles. They do not have an electric motor, and they do not need to be recharged. But rather than conventional hybrid systems, they make use of energy recovery systems.

These energy recovery systems store heat and kinetic energy collected from the brakes and exhaust system of the car to use for augmenting and increasing the power output of the car.

These hybrid systems make F1 cars the most powerful and the most efficient racing cars in the world.