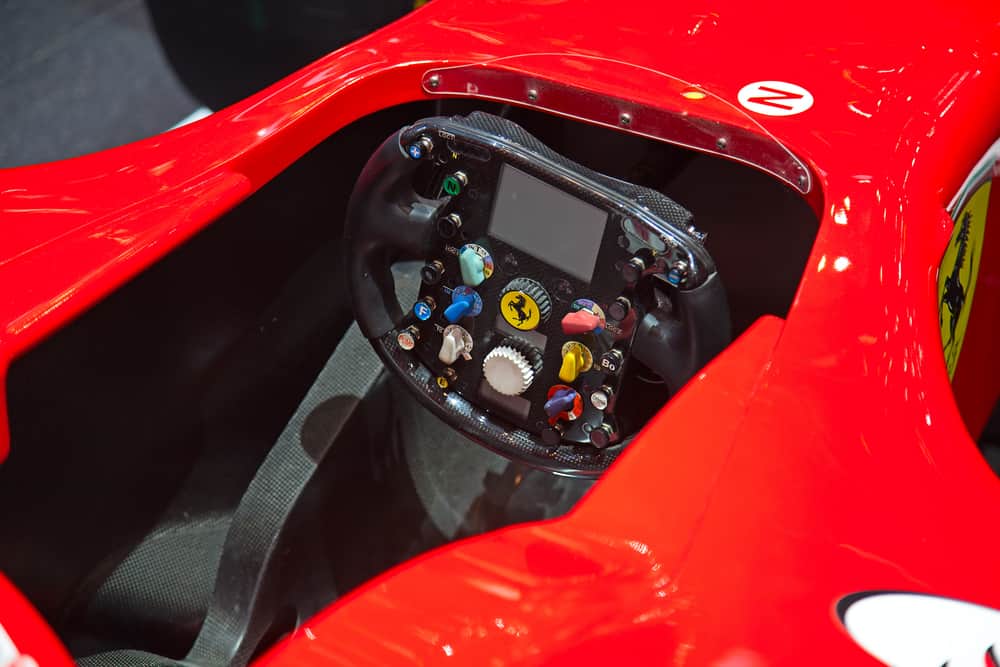 Formula 1 cars are some of the most advanced racing vehicles in the world. There is no motorsport more sophisticated than Formula 1, and this is best demonstrated in the technology that is used in race cars. There are many questions that F1 fans often ask about the way F1 cars work, including “are F1 cars stick shift?”

F1 cars are not stick shift. All Formula 1 cars are equipped with semi-automatic gearboxes that are operated with the use of paddle shifters behind the steering wheel. These sequential gearboxes are very sophisticated. Shifting gears with paddles makes them far more efficient during a race.

There is nothing like Formula 1 cars. These vehicles are responsible for many innovations within the motor industry, many of which find their way into road cars. The way F1 cars shift gears has changed drastically over the years as the cars have been developed and improved. Let’s dive deeper into how F1 cars shift and a little into the overall transmission system in an F1 car.

Do F1 Cars Use A Stick Shift?

Formula 1 cars have always been, and always will be, at the peak of automotive technology and innovation. Many innovations made in developing Formula 1 car have found their way into use for commercial road cars. In fact, the shifting system that is used in modern F1 cars is an example of F1 tech in regular road cars.

Formula 1 cars are not stick shift. The transmission system in the modern Formula 1 car is unlike any other system in F1 history.

Selecting a gear in a Formula 1 car is simply done by pulling a small paddle behind either side of the steering wheel.

One paddle steps up a gear, and the other steps down a gear. These paddles are very easy to operate and extremely convenient for the driver to use. Rather than taking a hand off the steering wheel and reaching for a stick shift for a gear change, a modern F1 driver has to merely tap a small paddle with one finger without moving their hand at all.

The paddle shift system in a Formula 1 car is designed to make changing gears as smooth and seamless as possible. This is made a reality by a highly automated, semi-automatic, 8-speed sequential gearbox.

With such a sophisticated gearbox and transmission system, the modern F1 car would have to rely on a stick shift. However, the innovations in Formula 1 have led to these semi-automatic gearboxes that can be operated with a simple switch rather than a clutch pedal and a stick shift.

Why Do F1 Cars Use Paddle Shift Systems?

The modern paddle shift systems that are implemented in F1 cars are present fr several reasons.

Using a semi-automatic gearbox allows the actual gear shifting to be done with sophistical electro-hydraulic systems, which can operate significantly faster than a human hand. This means gear changes happen more quickly and efficiently compared to a manual change made by a driver.

The semi-automatic shifting systems are also intended to keep the emphasis on driver skill rather than technological advancements and aids.

The use of a paddle shift system with a semi-automatic gearbox ensures that the driver must still be involved in some aspect of shifting gears.

This opens up the driver to make a gear change mistake that may cause them to lose speed and traction during a race.

This forces the drivers in F1 to perform gear changes well and efficiently, rather than relying on fully automated shifting systems.

Using this type of system keeps the drivers on a more even par without providing an opportunity for teams with bigger research and developments budgets to gain an advantage through technological innovation.

The semi-automatic nature of the F1 shifting system is very efficient and exceedingly quick, but it still retains the important aspects of driver skill and prevents teams from illegally using automated shifting systems to gain a racing advantage. Paddle-shift systems keep teams honest and drivers working harder to maintain and improve skill levels.

Formula 1 cars have always led to the cutting edge of automobile technology. The transmission systems in F1 care are no exception. Paddle shift systems in F1 are commonplace now, but has it always been this way?

Formula 1 cars were not always paddle-shift operated. Before 1989, all F1 cars selected gears with the use of a traditional stick shift. Only in 1989 was paddle-shift introduced to F1 through the invention of the -semi-automatic gearbox. Ferrari was the first F1 team to implement the technology.

Before the invention of the semi-automatic gearbox, all F1 car transmissions were manually operated. This involved the use of a clutch pedal to disengage the gearbox and a stick shift to select gears.

There were numerous iterations of manual gearboxes in F1, but the first paddle shift system changed everything.

These semi0automatic gearboxes and paddle shift systems were not without their problems in the early year. Drivers had to deal with paddle failures, and there were efficiency issues, but once these problems were rectified, it became clear that these systems were far superior to manual systems.

However, not all F1 teams used these systems at first. The last F1 car to use a conventional manual gearbox raced in 1995 – a full 6 years after Ferrari first introduced the technology to the sport.

Since 1996 all Formula 1 cars have utilized semi-automatic gearboxes with some form of paddle or button shift system that the driver can operate from the steering wheel.

If Formula 1 cars have paddle-operated gear systems, do these cars still have a clutch and a clutch pedal?

Modern F1 cars do have a clutch but no clutch pedal. For the most part, the F1 clutch is operated automatically by an electro-hydraulic system. The only time the cutch is manually engaged is when the car moves from a stand-still.

The clutch in a Formula 1 car is incredibly advanced. These units are more advanced than almost any other race car, and the way they are operated is incredible.

A Formula 1 car does require a clutch to disengage the engine from the drive train in order to change gears and keep the engine running.

However, since the invention of seamless semi-automatic sequential gearboxes and clutch systems, the majority of this operation has happened automatically.

Apart from that, the clutch is entirely automatic, and therefore F1 cars have no clutch pedal at all.

The electro-hydraulic system that is used to operate the clutch, disengage the gears, select a new gear, and re-engage is so efficient that it completes the entire process in 0.005 seconds.

What Transmission System Do F1 Cars Have?

Modern Formula 1 cars are incredible machines, but without going into too much detail, what are the important facts about the transmission system in an F1 car?

These are a lot of big, meaningless words to take in, but what it all boils down to is that F1 gearboxes have eight forward gears, they are sequential, meaning you cannot skip gears when shifting, they are semi-automatic because they do not require a manual clutch input, and they are built from a hybrid of electric and hydraulic technology to combine the best f both worlds.

These are the best transmission systems in Formula 1 history.

How Well Do Paddle Shifters Work?

Paddle shift systems may not be ideal for road cars, which is the source of much frustration among drivers, but they are ideal in racing cars. These systems are incredibly fast, very efficient, and surprisingly simple. These systems work very, very well.

Since the innovation of the semi-automatic transmission system in 1989, Formula 1 has made further advancements in the gearbox and overall transmission technology.

These advancements include efficiency, speed, power, durability, reliability, weight, material use, and many other factors.

All of this research and practical development has culminated in the modern F1 transmission system that is used today.

By these standards, the Modern Formula 1 clutch and shifting system is the best system that has ever been equipped on an F1 car.

Paddle shifters are a direct result of a semi-automatic gearbox and transmission system that allows the driver to change gears as fast as the sophisticated system is truly capable of.

That being said, there was a stint before 2010 where F1 cars were run with fully automatic systems, and these were even quicker regarding gear selection, but they were deemed unfit for the sport due to misuse and unfair advantages gained by teams with bigger budgets.

The innovation here means that paddle shifters in F1 are near perfect and are an ideal method of driver-based gear selection for the present sophisticated transmission system.

Many Formula 1 fans regard F1 cars of history to be better racing vehicles, forcing the drivers to the driver at a higher standard due to less involvement of technology to “cheat” and increase performance independently of the driver. This leads to the question, were stick shift systems better than paddle shift systems?

The answer to this question is no. Stick shift systems were not better than paddle shift systems, and if they were, F1 would still be using them. The truth is, no human being can operate a clutch and select a gear as quickly as modern F1 shift systems can, making them far superior to manual systems.

The F1 cars of old were nowhere near as sophisticated as the cars today. They were more powerful in regarding straight brute force and horsepower, but modern cars are able to extract more sped, more performance, and significantly more efficiency from smaller engines and more automated transmission systems.

The fact that F1 cars use semi-automatic systems for shifting gears does not detract from the cars and does not mean that the cars require less skill to drive.

Changing gears is easier now than before, but the cars used are more difficult t drive overall, which pushes the drivers in Formula 1 to constantly improve their driving abilities.

The modern paddle shift system is not a “cheat,” as some might say, but rather it is a way to make the car more efficient for the driver to use, making it a better machine t showcase the drivers’ talent without anything getting in the way of what they are truly capable of.

At the end of it, it is important to know that Formula 1 cars are not stick shift cars, but they are rather machines that are designed for efficiency and maximum performance.

This requires a transmission system that is hyper-efficient and able to function faster and with more accuracy than a typical human can.

Formula 1/ stick shift systems are simply too slow and inefficient for the modern sport that is Formula 1 racing.