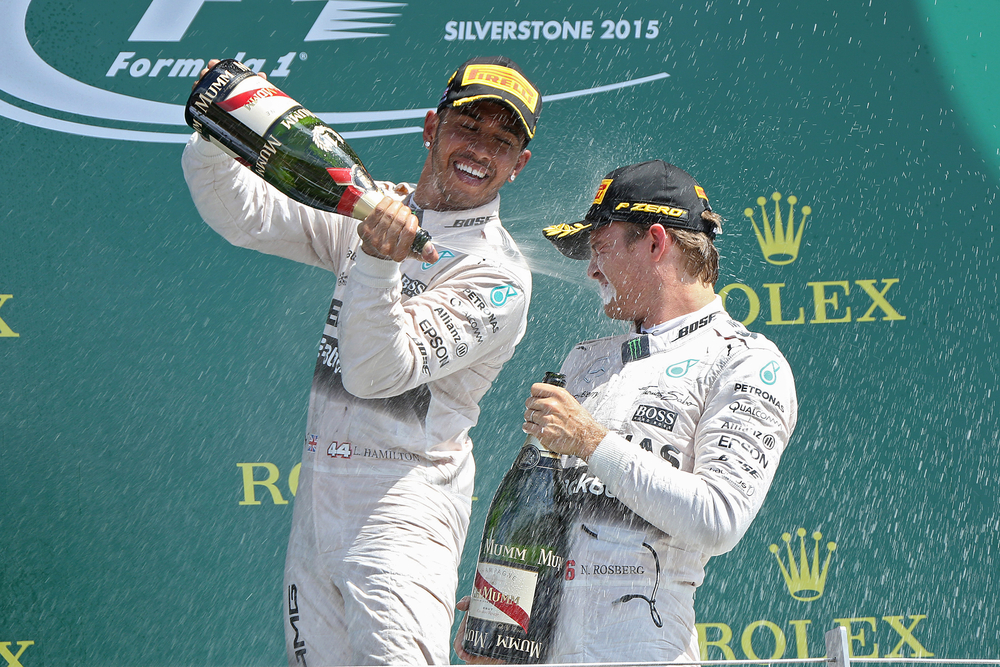 F1 drivers live a life of glitz and glamour. They jet around the world, visiting some of the most exciting places. They get paid tons of money and enjoy a lavish lifestyle. However, you may be wondering if F1 drivers are allowed to drink alcohol while living it up in fine hotels and houses?

F1 drivers are allowed to drink alcohol. They drink sparkling wine on the podium (except in middle eastern nations) and will often drink on special occasions. However, they may not be detected with alcohol in their systems before or after a race; otherwise, they’ll be disqualified.

In the past, F1 drivers used to be some of the biggest party animals around, but things have changed in recent times. Now, drivers tend to be slightly more limited due to strict diets and intense training regimes. This doesn’t mean they aren’t exempt from letting their hair down and drinking some alcohol. But, they only do so on certain occasions, so let’s look at when they drink and the reasons behind their reserved drinking.

Formula 1 drivers can drink alcohol; however, because of their strict diets, they usually do not consume very much and often do it only on special occasions. These special occasions are generally parties or other celebrations. These typically follow race or championship wins.

Sometimes, drivers have a little too much to drink, though. One example is Max Verstappen, who overindulged a bit after winning his maiden F1 World Championship in 2021. The Red Bull driver stated, “So it was a lot of fun. Of course, when I woke up, it wasn’t so fun. I maybe regretted that final drink.” Who can blame him, though, as winning your first F1 title isn’t something that happens every day?

F1 drivers also drink at parties or other events but won’t do this very often. So, don’t expect to see an F1 driver coming home at the end of the day and cracking open a beer or a bottle of wine to settle into the evening.

Why Do F1 Drivers Not Drink Much Alcohol?

F1 drivers do not drink regularly because of the intense physical demands of driving an F1 car. Formula 1 drivers are subjected to extreme G-forces when they’re behind the wheel of their car. When they’re cornering and braking, drivers can experience up to 6g, and in some accidents, they can be exposed to 50-60g.

To drive the car effectively in these conditions, it is vital to be physically fit and, in particular, have a very strong core and neck. If the core and neck are weak, drivers’ heads can drop in corners, or their bodies can shift, compromising their visibility and ability to operate the car. Furthermore, the steering wheel and brake pedal require intense psychical effort. F1 drivers turn and brake hundreds of times throughout a race, placing severe strain on their bodies.

To make it even harder, drivers must do all of this in extreme heat. Their fireproof suits and helmets are designed to keep the drivers safe if their car catches alight. While they do a brilliant job at keeping the heat out, they also keep the heat in. To make matters worse, the cockpit of an F1 car is extremely hot as it sits near the engine and other hot components.

Drivers are also expected to remain under a certain weight. The combined weight of the driver in their race suit, shoes, and helmet is 80kg. If drivers weigh less than this, more weight must be added to the car to ensure that tall drivers are not disadvantaged just because of the extra weight added by their natural height. While this gives drivers some wiggle room, it doesn’t mean they can take it easy; if they weigh anything over 77/78kg, they add unnecessary extra weight to the car.

This combined means that Formula 1 drivers must be in peak physical condition throughout the season. As a result, they’re subjected to intense training regimes to ensure that they’re lean and fit to keep up with the rigors of F1. As we know, excessive alcohol consumption and tough daily physical training don’t go hand in hand, meaning drivers tend to avoid booze on the regular.

Do F1 Drivers Drink Before A Race?

During race weekends, F1 drivers tend to avoid alcohol. There are two reasons for this. The first is that it is illegal, and if the FIA catches a driver with alcohol in their system after a race, they can be disqualified.

Secondly, even if a driver did manage to sneak a drink without being caught, it wouldn’t be a wise decision because of how physically and mentally demanding it is to drive an F1 car. It is already hard enough when you’re sober, but it will be even more challenging if you’re drunk or hungover. When you’re regularly pushing the limit at speeds of up 300km/h / 186mph, the last thing you want is to have your focus compromised by the effects of alcohol. Therefore, drivers tend to naturally abstain from alcohol before a race.

In fact, Lewis Hamilton doesn’t even drink alcohol. So, when you see the 7x World Champion celebrating on the podium, he won’t be taking a sip out of the bottle of Ferrari Trento.

Examples Of F1 Drivers Partying It Up

We already know about Max Verstappen and the Red Bull team partying long into the night after the Dutch driver clinched his first-ever F1 World Championship after overtaking Lewis Hamilton on the final lap of the 2021 season. But what are some other examples of F1 drivers having a good time?

While F1 drivers are not allowed to drink before a race, it doesn’t stop them from occasionally having a good time. Sometimes, after winning a race or championship, they let their hair down and party it up. And of course, if they make it onto the podium, they’ll have some sparkling wine (it’s no longer officially champagne) unless they are in the Middle East, where they drink rose water instead.