Are Monster Trucks Gas Or Diesel? 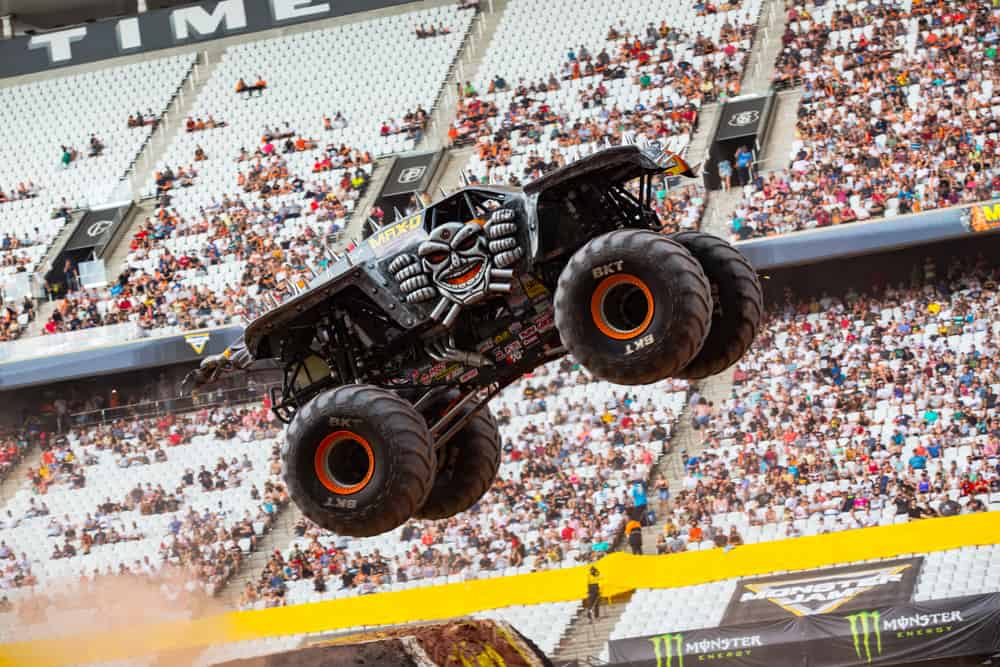 When you climb into a monster-sized pickup truck, it is best to know what fuel to put into it; otherwise, that monster-sized vehicle might not even start. Monster trucking started in the 1980s when someone converted their ordinary pickup truck into one of these larger-than-life vehicles. In order to power this truck, ordinary gas might not cut it – so what should you use to power this machine, gas or diesel?

A monster truck can either be methanol-powered or diesel-powered – it does not run on gas. Ordinary gas has a lot of energy, which is why many monster trucks use it to start their engines, but it does not have the power to let monster trucks do what they do. That’s where diesel and methanol come in.

When choosing a monster truck, it is important to consider which fuel is used to power them because that will affect the performance of the truck. This raises a couple of questions, such as what difference does it make if you use one type of fuel as opposed to another? Are there any other factors to consider other than the performance the fuel has on the monster truck? All of this we explore!

Why Other Fuels Are Better Than Gasoline For Monster Trucks

There are three different types of fuel that are of interest when it comes to monster trucks. We will quickly review them to establish why they are or are not good for monster trucks.

Gasoline is a high-energy mixture of various hydrocarbons that are flammable that are derived from petroleum. This became the biggest source of fuel for automobiles because its energy of combustion is very high. But this high-energy content of gasoline is what makes it unsuitable for monster trucks

Gasoline has a much larger energy density than methanol, and it measures at 18 400 BTU/lb for gasoline vs. 9 500/lb for methanol, but it is not as clean as methanol. It also does not provide the power that methanol and diesel can provide to an engine, and thus a monster truck.

Methanol has also been named ‘wood alcohol’ and is widely considered to be an alternative source of fuel in terms of United States legislation.

Methanol has almost 20% more power than ordinary gasoline – but it has less energy. Methanol Fuel is also much more affordable than gasoline, making it a more attractive option as a fuel to power monster trucks. In addition to being more cost-effective than gasoline, it is also much cleaner.

Diesel is what one gets if one mixes hydrocarbons obtained by distilling crude oil. Diesel is characterized by its higher amount of energy when compared to gasoline.

Diesel costs approximately the same as gas; this means that diesel does not result in a cost-saving for monster truck owners. The main reason it is a fuel that is preferred over gasoline for monster trucks is because of its superior power-providing characteristics.

What Kind Of Fuel Do Monster Trucks Use?

For a long time, monster trucks ran on methanol fuel (alcohol, as some laymen prefer to call it) – in fact, the man who invented the first monster truck (which he named Bigfoot) states that he powered ‘Bigfoot’ with alcohol (methanol fuel), not gasoline! This was way back in 1975. Only later on in the game did diesel fuel start floating around as an idea in the Monster Jam sphere.

In the year 2008, the first (modern era) diesel monster truck came onto the scene, and it was called the Hushpower Dodge. Diesel monster trucks became a bit more mainstream when one prominent monster truck named “BroDozer” made an appearance in the Monster Jam of 2018. Due to its performance and landing at fourth place, it was able to convince the masses that diesel is indeed a viable future for monster trucks.

So What About Gasoline?

Given the power output of gasoline, it is said to not be the best form of fuel when it comes to a monster truck. That said, there are many monster trucks that use gasoline merely to get the engine started. This can be done in two ways:

Thus, other than getting the engine started, gasoline does not offer monster trucks the power they require to do what they want to do. Once your monster truck is turned on and ready to go, the diesel or methanol fuel will take over.

Which Engine Is Better, Methanol Or Diesel?

The question now remains which fuel, and by extension which engine, is more efficient and more viable?

China has been developing technology that allows methanol to be used for trucks for four decades already. This is done in order to provide an alternative source of fuel that is ‘greener’ than its current counterparts.

It is very apparent that one great advantage methanol has over diesel is the number of pollutants it produces when burning – methanol is very clean, and diesel is not. Because of this, methanol is currently being used as a ‘stepping stone’ to electric-powered trucks.

There is one disadvantage with methanol, however, which is that it is more difficult to ignite methanol, and it does not store as easily because it is corrosive. It is also considered to be less efficient to produce if one makes the methanol from coal – diesel and gasoline are more efficient to produce if it is produced from petrochemicals. Thus, the actual vehicle pollution of methanol decreases, but the impact on climate change is worse.

Does that mean that diesel is the future – specifically of monster trucks? Diesel emissions do not contain as much dioxide as petrol-powered vehicles, and diesel engines are considered to be lean combustion engines. This means that carbon monoxide formation is at a bare minimum. Additionally, diesel engines are also better when it comes to fuel economics when compared to gasoline-powered engines.

When tested and compared directly to one another, the fuel efficiency of diesel overpowered that of methanol. A test was conducted over the course of a week between two different types of monster trucks; a diesel engine versus a methanol engine. It was presumed that the diesel monster truck would require a 55-gallon tank because that is what the methanol monster truck used, but it only required 10 gallons.

That means that a diesel engine might not be as clean as methanol, but it is more efficient with regards to fuel than methanol. Ultimately, diesel engines are still relatively new if compared to methanol-powered trucks. It does show promising signs, but it is still a work in progress. But, environmentalists might just curb the rise of diesel due to its negative environmental effects, knows?

In conclusion, which fuel do monster trucks use, gas or diesel? The answer is definitely not gas. Gas is only used to start the powerful engine of the monster truck due to its high energy output. It is, unfortunately, not strong enough to provide the monster truck with the torque it requires to do its monster truck-activities!

The real contenders are between methanol and diesel. Methanol is an older form of fuel used in monster trucks, but it is very viable. It has tremendous power output and is very clean compared to gas and diesel. Diesel, on the other hand, is more efficient than gas and methanol, but it is not as clean as methanol.

This does pose the question of what the future of monster trucking will be; diesel or methanol? It is difficult to say. In the nearest future, it might be diesel due to its great fuel efficiency and power output. On the other hand, if environmentalists get their way and limit the usage of diesel altogether, we may only be left with methanol- or electric-powered monster trucks in the far-off future!

How Do Monster Truck Drivers Drive?

Why Do Monster Trucks Diff Glow?

How Are Monster Trucks Transported?