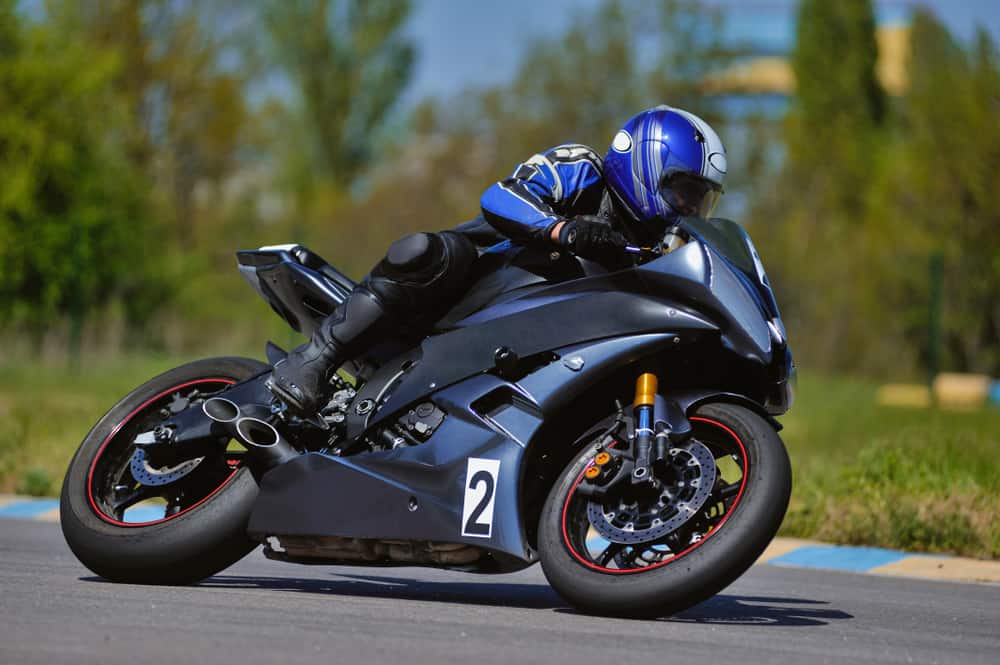 Ground clearance on a standard road motorcycle is not great, particularly on the so-called ‘crotch rockets’ designed for high-speed acceleration and swift cornering. Dirt bikes have a much greater ground clearance, which is vital for the riders to clear the jumps and obstacles, but what about MotoGP bikes? Are they lowered in some way?

MotoGP bikes are not lowered. Lowering would suggest that they have been built to standard specs, and then the suspension has been changed. A MotoGP bike is built from the ground up to the specifications of its rider. There is no standardization regarding chassis specs.

One man’s meat is another chap’s poison, as we all know. (If you’re not familiar with the adage, it means that what works for one person will not necessarily work for the next) Suspension is not created by simply bolting the frame together and then lowering or raising it.

How is the Setup of a MotoGP Bike’s Suspension Achieved?

For the rider to offer feedback to his team of mechanics, he needs to feel the bike’s responses to his decisions, and suspension plays a vital role in giving him a vehicle through which he can form an opinion. Unless the bike is set up in the way its rider prefers, he will be less efficient in performance and feedback.

I was mildly surprised when I first learned that the suspension, once set, is not permanent and may be changed after mutual agreement between rider and support crew, not just from race to race, but even from practice day to practice day.

What Contributes to the Decision Concerning Suspension Setup?

There are several factors, most important of which are:

Let’s look at these in some detail:

Asphalt is the part of the track with which a tire is in (hopefully) constant contact. Very similar to tarmac, which many of us will be familiar with, at least by name, asphalt has bitumen added to it.

Since tarmac is easily damaged by gasoline and diesel fuel, and asphalt is easily repaired, it is the first choice for race tracks and airport runways, where climatic conditions might otherwise be a problem, as asphalt is resistant to rain, sleet, snow, and heat.

Although adverse weather and soil conditions will eventually affect asphalt – nothing lasts forever, right? – the overwhelming majority of wear, tear, and damage comes from the vehicles that race on it.

A MotoGP bike will weigh 265kg/585lbs with a 90kg rider in the saddle, so it does not do much damage to a race track, except when barrel-rolling, of course, but the same track is often used by Formula 1 (F1) cars, by other sports cars, and even by trucks.

These four-wheeled vehicles have an enormous impact on corners and braking zones, and racetracks will start to get minute ripples that are unnoticed by cars and trucks but are easily felt through the frame of a MotoGP bike. Accidents also cause damage to the asphalt, and continued use of the track means it requires regular repair.

If the repair has been partial, correcting only the most heavily affected sections, there will be noticeable differences between the old and the repaired sections that can affect riders critically. The level of grip will usually be different on the new sections, causing the riders to have to negotiate the less ‘grippy’ sections more carefully.

In most cases, full resurfacing, as against partial repair, tends to get rid of the cracks and ripples that cause problems for motorcycles and creates a consistent level of grip across the track since the entire surface is, in essence, new.

Each MotoGP team in the World Championship is assisted by a tire technician employed by Michelin, the only official tire provider. This technician carries out int. al., a comprehensive analysis of the conditions at the track, both during practice sessions and before the race.

The technician provides the necessary advice for both team and rider to ensure the most suitable tire choice for the conditions.

Their advice is based on their analysis of the track’s temperature, tire temperature, and pressure, and the rider’s comments during warm-ups and practice sessions.

Although all of the tires are designed to be highly versatile, they do have differences. The soft tires, for example, will heat up quickly, giving the rider maximum grip in the fastest possible time. Unfortunately, if conditions are too hot, the same tires will overheat, leading to loss of grip and a potential face- planting on, or beside, the track.

Hard tires are made for long, hot runs, where the tire will take longer to warm up and longer to break down.

Input from the Rider

This is where experience and intuition on the part of the rider are vital. It’s entirely possible that after less than half a lap of the racetrack, an experienced rider will note six or seven things in the setup that require attention from the crew.

This feedback is invaluable in contributing to the decision concerning suspension setup. It is clear from this that a standard lowering of the frame can never be substituted for all of this input that goes into every practice session and race day.

If you are ever fortunate enough to visit a racetrack during free practice sessions, you will notice that the riders do not simply ride round and round the track. Instead, they are continually dipping in and out of the pit lane and communicating verbally with their mechanics, who may tweak the setup slightly or make notes for changes later.

Data from previous years can be used as a starting point, but each year there is further deterioration and track changes, which require a different setting. Tracks are used for events other than Moto3, 2 & GP and can take a pounding between bike races.

The Importance of Correctly Setup Suspension in a MotoGP bike

Suspension may seem pretty mundane at first: I mean, you take a frame, add wheels, shock absorbers, and an engine, etc., and off you go, right? Not even close. The suspension is certainly not a simple component of the bike, with scores of variables.

These require a certain force to be compressed (measured in Newtons/millimeter, or N/mm), and various stiffness levels are available. Choice of spring will be decided upon by both the rider and the track shape and condition.

Stiffer springs offer more support under high-speed braking conditions but create more wear on the tires, possibly compromising a rider towards the latter part of a race.

Softer springs, conversely, can compress fully under extreme braking conditions, which can be dangerous, but they offer an excellent lean angle and are far superior in a wet race.

Springs are compressed slightly when the suspension is at rest to avoid the spring reaching full compression on the track. This is called preload, and the more preload is increased, the system will require more force to compress. As a result, the suspension will take longer to sink.

Varying the Preload Can Also Change the Height of the Bike

Compression and extension adjustments are made once the springs have been chosen and the preload is set. The suspension will compress when the rider hits a bump, brakes, etc., and then returns to its traveling height. The adjustment used will determine the rate at which the spring returns to its original position.

In essence, it might appear that the lower a bike is set up, the less drag or wind resistance there will be, and that is true for the most part. However, taking a bend at high speed will immediately allow a new factor to enter the fray: Foot-pegs and riding boots would become instant casualties with the significant lean angles executed by riders today.

The result is a compromise, as with many things in racing. The mechanics will allow the bike to be dropped as close to terra-firma as possible without grounding the pedals on the one hand: On the other hand, they avoid any extra drag by making sure the bike is absolutely no higher off the ground than necessary.

The most important thing to remember regarding suspension is this: No two riders are the same, race the same way, or have the exact requirements from the bike. No two bikes are set up the same, except where the bikes are the primary and secondary rides for the same rider, as each situation is unique.

Louis Pretoriushttps://onestopracing.com
Previous article
Go Kart Won’t Stay Running? Here’s What To Do
Next article
How To Drag Race Legally – The Complete Guide