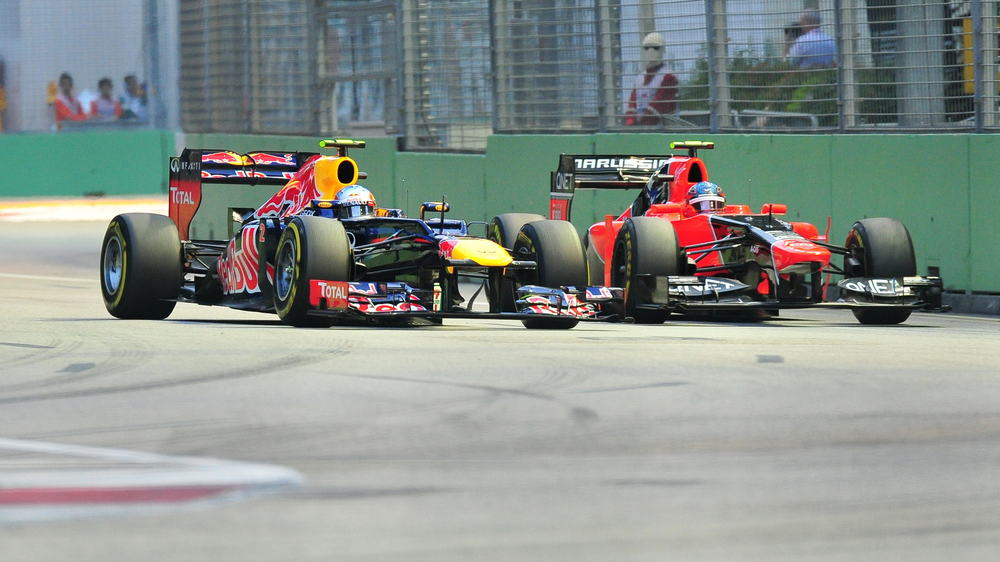 Overtaking is what makes Formula 1 so exciting. Those high-speed wheel-to-wheel battles with little margin for error are what all racing fans have come to expect from the sport. Some tracks on the F1 calendar are much easier to overtake than others. But why is this the case?

Some tracks are better than others for overtaking, but why is this case? Sometimes, it’s the track’s layout, but many other factors can influence how many overtakes are performed during an F1 race. So, let’s look at all of this and explore the best tracks for overtaking in F1.

What Are the Best F1 Tracks for Overtaking?

Some Formula 1 tracks are brilliant for overtaking, while others are notoriously difficult to overtake on. In recent seasons, the tracks produced on average, the highest number of overtakes in a race are the Bahrain International Circuit, the Algarve International Circuit (Portimao, Portugal), and Spa-Francorchamps (Stavelot, Belgium).

These tracks have produced so many overtakes in recent races because of their long straights, where Drag Reduction System (DRS) can help overtaking. DRS, which will be explained in more detail in the next section, helps increase a driver’s speed by 10-12km/h by reducing aerodynamic drag.

These tracks have long straights where drivers can easily use DRS to overtake cars in front of them, and therefore these tracks produce so many overtakes every race.

The Bahrain International Circuit is home to three DRS zones, which means flat-out racing in three sections of the track. There is also a long straight between turns 13 and 14, allowing drivers with cars good on high-speed straights plenty of opportunities for overtaking.

The main straight at the Algarve International Circuit is 969m long and is one of the two DRS Zones on the track. The other DRS zone is a bit shorter and is between turns 4 and 5. These two DRS zones on long sections of straight track combined with some exciting corners mean that the Portuguese Grand Prix always produces many overtakes.

Commonly known as Spa, the Circuit de Spa-Francorchamps is one of Formula 1’s most famous circuits, and it has been hosting Grand Prix’s since 1925.  The Kemmel Straight after the famous Eu Rogue and Raidillon corners is 770m long and allows drivers to reach over 310km/h (192mp/h). With DRS allowed on the straight, it is the perfect part of the track to overtake. There is also another DRS zone on the main straight, which enables more high-speed overtakes.

It is important to note that the number of overtakes at a specific venue will vary from season to season as it is affected by several things. While some tracks are easier to overtake on, many factors contribute to the ease of overtaking. These include:

It is much more challenging to overtake another car when the track is wet. Firstly, the circuit is much more slippery, so even with wet-weather tires, pulling off a high-speed overtake can be dangerous and be a one-way ticket to a did-not-finish.

Furthermore, when there is water on the track, cars tend to spray up a lot of water behind them, decreasing the trailing car’s visibility, making overtaking difficult.

2. How the Grid Position of the Good Cars Affects Overtaking

The further back one of the good drivers in a faster car starts, the more overtakes in a race there will be. This is because the top cars like Mercedes and Red Bull have such a pace advantage over most cars on the grid. Therefore, when they start near the back, they compete with cars much slower than them, and they can pull off many overtakes during a race.

When a safety car or a virtual safety car is deployed because of a hazard on the track that makes racing potentially dangerous, overtaking is forbidden. Drivers must maintain speed and track position.

How Does DRS Aide Overtaking in F1?

DRS or, in full, Drag Reduction System does precisely as its name suggests it does; it reduces drag. This is beneficial for overtaking because less drag = more speed, and being faster than the car in front of you allows you to overtake them. DRS increases a driver’s speed by 10-12km/h, which gives them a pace advantage over the car in front of them.

DRS can only be used in certain parts of the track, and these spots vary across circuits. The DRS sections are always on a predominantly straight part of the track, which means you will always see DRS being used down the pit straight.

DRS allows a driver within one second of the car in front of them to open a section of their rear wing. This allows more airflow over the car as what was previously a flat surface being pushed straight into the wind has been significantly reduced in size. DRS is also available to drivers overtaking cars they need to lap to help them pass backmarkers without too much hassle.

DRS can be activated anytime during free practice sessions and qualifying, but it can only be used when a driver is within one second of a car ahead of them during a race. There are DRS detection zones on the track, and these calculate the gaps between cars. When a driver is within one second of another car, this will be detected, and a light will flash on the driver’s steering wheel to tell them that they are now legally allowed to make use of DRS.

It can also be used to overtake backmarkers to ensure that the drivers at the front of the race don’t get held up for too long by the cars they are lapping.