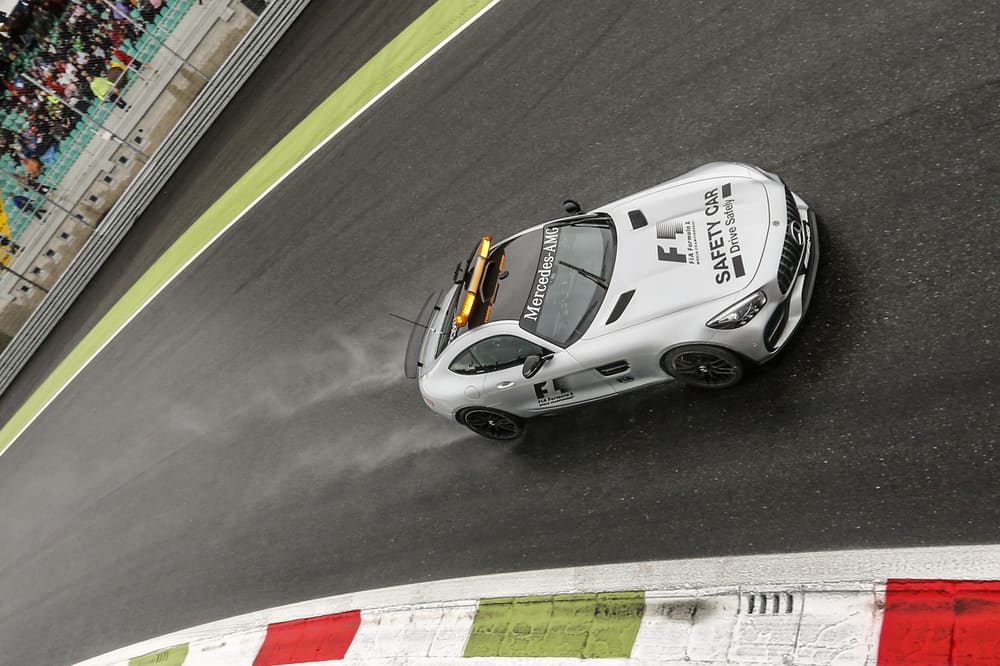 If you watch an F1 race, there will inevitably be talk about lapped cars, backmarkers, and blue flags. What exactly lapped cars are in F1 and whether or not they can overtake the safety car are useful things to understand as an F1 fan.

The latest version of the FIA regulations see article 55.13 state if the clerk of the course thinks it safe to do so, and the message “lapped cars can now overtake” has been sent to all cars that the leader has lapped, they will be expected to pass the safety car and the cars on the lead lap.

The FIA has recently published an updated version of the sporting regulations that feature revisions, including lapped cars’ safety car regulation. Previously the rule stated that any and all cars that have been lapped by the leader of the race would be required to overtake the cars on the lead lap, including the safety vehicle. The change appeared in issue 5 of the 2022 FIA F1 sporting regulations.

The change to the rules means that should a similar incident happen again, all lapped cars are required to unlap themselves.

It was previously stated by article 55.13 of the sporting regulations;  that if the course clerk deems it safe to lap, and the message “lapped cars may now overtake” has been instructed to all competitors using the official messaging system, any lapped cars that were overtaken by the leader of the race will be required to pass the cars on the lead lap and the safety car.

Furthermore, once the last lapped car has overtaken the lead car, the safety car will go to the pitstop at the end of the next lap, so in summary, once the track is safe, the lapped cars are allowed to overtake and unlap themselves and proceed around to the back of the pack.

The Safety Car And The Procedure For Lapped Cars

Backmarker is a term used to describe the racer at the end of the field, often when he is encountered by the leader of the race. The Blue flags are used to inform the backmarker when he should let the fastest car pass. Once the clerk of the course decides to deploy the safety car, they press a button that sends the signal notifying all the racecars.

The safety car’s light comes on, on the steering wheel, and loads of sc signs light up around the track. The moment this happens, nobody is allowed to overtake, no matter where they are on track. A safety car is the course car that is called from the pits to go ahead in front of the first car in the race in the event of a problem that requires the cars to be slowed.

In Formula 1, if an accident or inclement weather (typically heavy rains) interferes with normal racing to continue safely as normal, the director of the race will call for the safety car period, which will result in the marshals waving yellow flags and holding sc boards pending the car in question entering the track.

Since 2007 all Formula 1 cars must have led’s and display lights fitted to the steering wheel or to the cockpit, which informs the driver which flags are being waved. A yellow led light is engaged, notifying that the safety car has been deployed and will be entering the track.

The safety car has both green and orange lights mounted on its roof in the form of a light bar. The green lights are used to signal the lap cars that they are now allowed to pass and maybe overtake the safety car. This will only be done until the race leader is immediately behind the safety car and at the head of the queue of the race cars following.

Since 2015, the safety car is not expected to wait till all the backmarkers have caught up again with the other racers. Once the safety car is ready to leave the race track, it will then turn off the orange lights to inform the racers that it will be entering the pit lane at the end once the lap is finished. Drivers must continue until they cross the first safety car line, where the green lights and flags will signal that they are ready to start the race again.

The safety car is driven by professional drivers onboard high-powered modified vehicles supplied by Mercedes Benz and Aston Martin. Ever since they started with the 2021 season, the safety car must maintain a reasonable speed to ensure that the competitor’s tires are as close to operating temperature and that their engines will not be overheating.

A co-driver accompanies the safety car driver to assist with the operations and communications. The safety car also has the upper hand over the traditional red flag for incidents that may occur during the first three laps.

With the red flag, it would take a minimum of 15 minutes to restart the race, and the 2-hour time limit would not start again until the racecars were ready for a 2nd formation lap. Regarding the time limit and when the race is being scored, the time is also counted while the safety car is on track and when the race resumes.

Article 48.12 of the 2021 sporting rules states: that when the clerk of the racecourse finds it safe to do so, and the message ‘LAPPED CARS MAY NOW OVERTAKE’ has been sent to all the racers via the messaging system informing,  any cars that the leader of the race has lapped will be required to overtake the cars on the lead lap as well as the safety car.

However, the latest version of the regulations sees Article 55.13 state that when the clerk of the course considers it safe, and the message ‘LAPPED CARS MAY NOW OVERTAKE’ has been signaled to all the cars that the leader has lapped, it will be required to overtake the race cars on the lead lap and the safety car.

F1 is a motorsport that can be enjoyed by almost any person, especially if you start to understand how communication systems work. I hope that this piece was informative and that it helped you to understand the regulations for when lapped cars can overtake other cars and safety cars.

Louis Pretoriushttps://onestopracing.com
Previous article
How To Become A Formula 1 Doctor
Next article
How Many Times Can You Use DRS In F1?