Can You Pit During Safety Car? 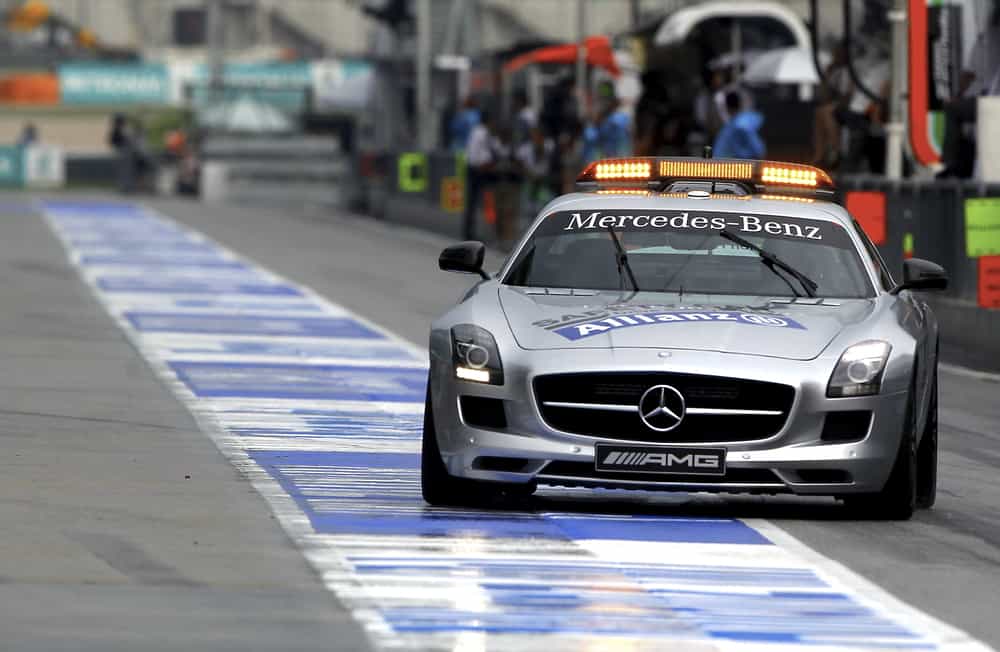 Formula 1 is the pinnacle of motorsport. The cars are the fastest and most technologically advanced globally, and the drivers are the best in the business. But what happens when the safety car comes out? Can you pit?

When Formula 1 race control decides to deploy a safety car onto the track, no race cars are allowed to overtake one another. However, Formula 1 cars can come into the pit for a new set of tires or change a front wing or nose under safety car conditions.

This blog post will tell you everything you need to know about pitting during a safety car.

Can Formula 1 Cars Pit Under A Safety Car?

Once Formula 1 race authorities decide to send a safety car onto the track, a button is pressed that sends a signal to all race cars. A “safety car” indicator lights up on the steering wheel of all race cars, and “SC” markers are displayed all around the track.

When this happens, no race cars are allowed to overtake each other no matter the position they are in at that moment. All race cars are slowed down to a very slow speed behind the safety car. Any race car is allowed to come into the pits during this time.

While an opponent’s car is in the pits, any cars behind him are permitted to overtake him and gain a position advantage. When two cars are fighting for position pit simultaneously, and the opponent’s car has a more extended pit stop, the car that has a faster pit stop and gets back onto the track the quickest will gain the position.

That is the only time that overtaking is allowed on the track, under a safety car. The safety car will drive slowly, allowing other cars to go past it until it catches up to the leader. The lead race car is not allowed to overtake the safety car; instead, he should follow the safety car closely.

There is an exception to the rule of race cars not being allowed to overtake under a safety car, and that is the rule which specifies that lapped cars are allowed to unlap themselves.

When Did F1 Introduce Safety Car?

A safety car also referred to as a pace car, is a car that limits the speed of cars on the track when there is an accident or other danger. The safety car is driven by a professional driver, who at this stage is a German driver, Bernd Mayländer.

If there is a racing incident on the track, yellow flags will be shown at the incident point or a few hundred meters before the incident. In the case of lots of debris on the race track, the safety car is deployed to slow down the race cars while the race marshals clear out the track.

Before race cars reach the safety car, all drivers must slow down to a minimum delta, like under a Virtual Safety Car (VSC). Under safety car conditions, all drivers are not allowed to overtake and must hold their positions.

Drivers are allowed to pit during a safety car, which can benefit some drivers if the safety car is deployed close to the pit window since the time lost from coming into the pits is reduced significantly.

The safety car first made its appearance in Formula 1 racing at the Canadian Grand Prix in 1973 and was treated as an exception rather than the rule. In 1993, it became a permanent fixture for all races, although regular road cars were used.

What Car Is The Safety Car?

Some of the early safety cars included Fiats, Hondas, and an Opel Vectra used at the 1994 San Marino Grand Prix, the same year that Aryton Senna and Roland Ratzenberger were killed. Since 1996, Mercedes supplied the official F1 safety car, in an agreement that still stands today.

The current safety car is a Mercedes-Benz AMG-GT Black Series. It is a modified supercar with lights fitted to the car’s roof to indicate to the drivers the situation. When the lights on the safety car go out, this indicates that the safety car will be pulled back in, and normal race conditions can resume.

The crew onboard the safety car will contact the race director by radio to update him on the race conditions, especially when the race track is wet. In late 2021, a new safety car brand was introduced.

An Aston Martin was brought in as an alternate safety car for some race tracks and now shares some safety duties and responsibilities. The Aston Martin Vantage is used, which has similar specs to the Mercedes AMG and is fitted with the same safety car equipment.

What Is The Difference Between A Safety Car And Virtual Safety Car?

The safety car has always been a physical car deployed onto a race track in the event of a collision or any other racing incident involving one or more race cars.

However, there has also recently been the introduction of a virtual safety car. A virtual safety car (VSC) is not a physical car; instead, it is invoked by the race director to control the driver’s speed to 60 to 70% of their average race speed, thereby neutralizing the field.

Yellow flags are sometimes used to warn drivers of potential hazards on the track and to slow down. In extreme conditions, when a race car needs to be removed off the track by a crane, or if there is debris that needs to be removed by race marshals, then a physical safety car is deployed.

All race cars, including the race leader, must get behind the safety car and follow him until all obstructions and debris are cleared off the track. A virtual safety car has a few benefits over a physical safety car:

1. It can be deployed instantly, forcing all race cars to reduce their speeds at the touch of a button. Under a virtual safety car, no cars are allowed to overtake, and the race leader at the point in which the virtual safety car was deployed holds his position unless he decides to pit for a change of tires.

2. A virtual safety car does not bunch up the cars on track; instead, it maintains the gaps between the cars.

3. A virtual safety car can last as long as needed; you do not need to wait for a few laps to pass or for the backmarkers to unlap themselves as with an actual safety car.

Formula 1 racing is an intense and dangerous sport, and the safety of the drivers is always the top priority. The safety car is deployed in the event of danger on the track. It is the responsibility of the driver to pit as soon as possible. This can be a tricky situation for the drivers, as they must decide on whether to pit or not.

If they pit, they may lose a position or two, but they may be putting themselves at risk if they stay out. Ultimately, it is up to the driver to decide whether to pit or not, and it is always tricky.

Louis Pretoriushttps://onestopracing.com
Previous articleWhat Does P Mean In F1?
Next articleWhat Happens If You Don’t Qualify In F1?