Can You Repair Car Under Red Flag? 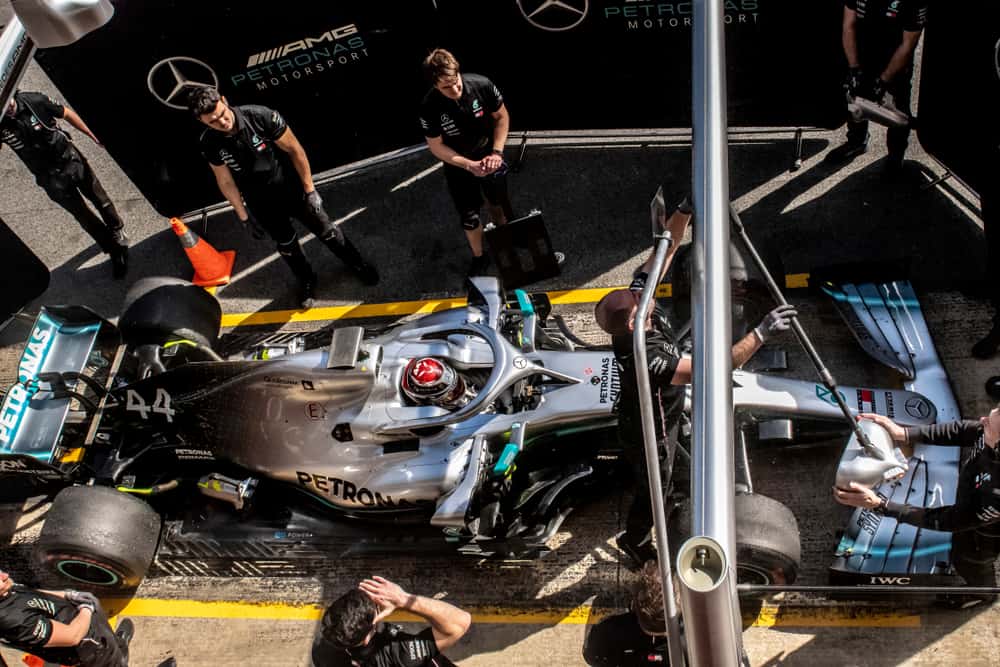 Formula 1 is a sport with many rules and regulations that every team and driver must adhere to without deviation. Some controversial race events that have taken place in 2021 have led many F1 fans to ask the question, can you repair a car under a red flag?

FIA regulations do allow repairs to be made to an F1 car under a red flag. This is meant to allow for changes in wet weather, but F1 teams are using the rule to make repairs while the race is suspended due to a red flag. While this is allowed, all repairs must be made before the race resumes.

Can Repairs Be Made During A Red Flag?

Recent race occurrences in the 2021 Formula 1 racing season have seen teams making repairs to racing cars during a red flag race suspension. This has given rise to the question of whether or not this practice is allowed.

Repairs can be made to an F1 car during a red flag race suspension. The Formula 1 rules and regulations put forward by the FIA do allow this practice. This is a relatively new regulation, known as the ‘red flag clause,’ and it makes it perfectly legal for teams to repair cars during a red flag.

There are some provisions to this clause, which do regulate what can be done within a red flag suspension, but the clause does allow repairs to be made, nonetheless.

Repairing an F1 car during a race is nearly impossible. This regulation affords an F1 team the opportunity to make repairs, so long as the circumstances make it possible, and if the car is not immediately eliminated from the race in the incident that caused the damage.

If the repairs are made quickly enough, completed, and done well during the red flag suspension, the car will be allowed to continue n the race, allowing the team an opportunity to earn points or to even win the race, when the car would have otherwise been eliminated from the race.

This clause offers a unique opportunity to the teams that are equipped to capitalize on it.

Is Making Repairs During A Red Flag Fair?

In the few instances when this clause has been utilized, outside of its intended purpose of wet weather car modifications and rather for making repairs to race damage, it has given rise to contentions. Is making repairs during a red flag fair?

The issue comes with this clause when a team uses it to keep a car in the race that then goes on to finish well or even win the race, as was the case in one race in the 2021 race season.

When one team or one driver gains good points or wins a race, especially under controversial circumstances, every other team in F1 tends to dispute the points or the win. This then leads rise to the conversation around whether or not the regulation that allowed the car to continue is fair.

At the end of it, a regulation or rule that applies to every team in the race and applies the same potential benefit to every team and driver without discrimination is fair.

This is the case of the red flag repair clause, as it applies to every team, every driver, and offers the exact same benefit to every race participant.

What Do The Regulations Say?

The so-called red flag repair clause makes provision for F1 teams to repair cars during a red flag suspension in a race or a sprint qualifying session, but not many know the exact parameters laid out by the FIA, which can cause some confusion. So, what do the regulations actually say?

The FIA regulations state that repairs can be made during the suspension, but the repairs must not impede the resumption of the race, and the repairs are limited to strict parameters that include which parts may be repaired and why.

“50.4:Whilst the sprint qualifying session or the race is suspended:

This is the exact regulation that allows teams competing in a Formula 1 Grand Prix Championship Race. As seen above, the teams are not permitted to make any changes they desire during the race suspension, but they are permitted to make some repairs and changes.

The repairs are limited to changing permitted heating and cooling devices, front and rear brake air duct changes, changes to radiator ducts, driver comfort improvements, changing tires, repair to damage caused by genuine accidents, and adjustments but not replacements to the front wing.

This is the limit of repairs and changes that can be made to an F1 race car during a red flag race suspension.

Why Repair A Car During A Red Flag?

Repairing a car during a Formula 1 race is allowed, but what is the point? Why not retire the car or try to continue with whatever damage the car has sustained?

The answer to this is simple: repairing the car, as much as is possible and allowed by the regulations, puts the driver in a better position for winning the race or scoring points. It’s all about the win and the overall season points.

If the car is retired, the driver will not earn any points, and the team will only have one other car available for points scoring rather than two.

This is as much reason as any to make the repairs, if possible, at the first available opportunity, even if that opportunity occurs during a red flag suspension.

Making repairs to the car during a suspension can mean the difference between coming first or second in the championship. This is a big deal for every team and for every driver on the grid.

Alternatively, allowing the car to continue without making repairs and hoping that the car will make it to the finish is a risk.

If the car sustains more damage, the repairs may cost more than the teams are allowed to spend or more than the budget they have available for repairs. This may have even more serious consequences than simply retiring from one race.

It behooves the team to make any repairs possible and necessary to the car during a red flag suspension to continue to race as well as possible.

There have been a number of red flag repairs in Formula 1, but three notable instances have occurred in the 2021 race season alone.

These are some controversial moments in the 2021 season, and these repairs have been contested and have given rise to a lot of conversation regarding the fairness of the FIA rules in Formula 1.

Three examples of red flag repairs in F1 include:

All of these instances were genuine accidents that resulted in damage to the cars. This damage was within the boundaries of what is permitted to be repaired during a red flag suspension, which allowed the teams to make the appropriate repairs when the opportunity arose.

The biggest controversy was the incident at Silverstone with Hamilton and Verstappen, as the Red Bull driver was sent off the track and sustained enough damage to be eliminated instantly, while the Mercedes of Hamilton was only slightly damaged, and repairing said damage during a red flag suspension resulted in Hamilton winning the race.

Should Red Flag Repairs Be Allowed?

One of the most talked-about topics in F1 right now is whether or not red flag repairs should be allowed, or if the teams should have to just take their hits and race with a damaged car or retire the care if damage occurs.

Red flag repairs should be allowed in Formula 1, as this allows the best opportunity for the best racing to occur. If the teams were not permitted to make repairs, this would severely limit the racing that happens within the race, and where is the fun in that?

Giving the teams the opportunity to make repairs during a red flag suspension allows any team to continue racing if the repairs can be made legally and within the duration of the suspension.

Tams do take a risk when making repairs under a red flag, as there is no way of knowing how long the red flag will last. If the team is unable to make repairs quickly enough, the car will be eliminated.

This makes the repairs fair, as the teams have to risk in order to make the repairs.

What Do Teams An Enthusiasts Have To Say?

Formula 1 teams and Formula 1 enthusiasts have differing opinions regarding the red flag repair clause. What do they have to say?

Formula 1 teams have disputed the clause recently because of Hamilton’s race win at Silverstone 2021 after a red flag repair. F1 enthusiasts say that red flag repairs should come along with time or points penalties, or even monetary fines if they occur.

Journalists and F1 enthusiasts have stated that any red flag repairs made during a race should come along with penalties for the team or driver. The teams in F1 would rather have the driver eliminated from the race altogether.

For this reason, the regulation is unlikely to be changed any time soon.

Formula 1 is governed by a strict set of rules and regulations laid out and implemented by the FIA. Part of these regulations states that repairs can be made under a red flag.

This means that as long as the teams adhere to the parameters surrounding this regulation, they are permitted to make repairs during red flag suspensions, regardless of what their teams or F1 on-lookers have to say about it.

This is a fair rule that does not set any driver up to win an advantage but rather allows a driver to continue in a race that they may otherwise have been eliminated from. This keeps the racing fair and entertaining and offers teams and drivers the best chance of winning and scoring points.

Is that not the point of the regulations? To make the racing fair and allow everyone the best chance of success? With that in mind, teams are allowed to make these repairs during a red flag suspension in a Grand Prix race.

Louis Pretoriushttps://onestopracing.com
Previous articleDo You Have To Make A Pit Stop In F1?
Next articleBest F1 Crashes Of All Time