Do F1 Cars Have Speedometers? 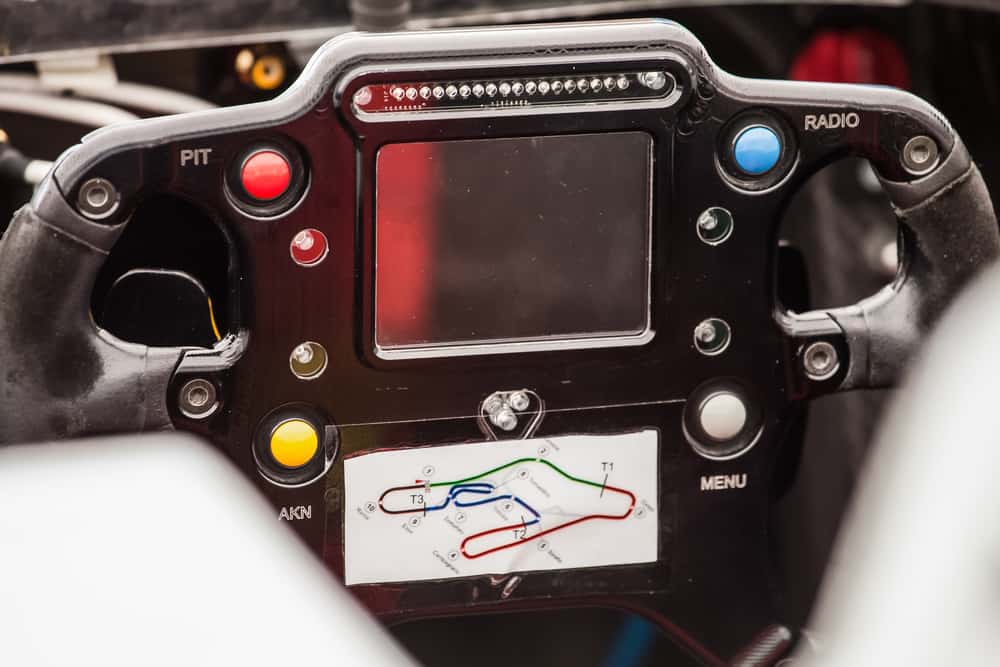 The similarity between F1 cars and almost any other type of vehicle is very slight. F1 cars achieve speeds of which most racing drivers can only dream. Despite this, the typical F1 driver is far less concerned about his actual speed but is more interested in the car’s performance, its balance, and his position compared to competitors.

Modern F1 cars do not have a standalone instrument acting as a speedometer. F1 cars have very complex steering wheels into which a screen is installed. The driver can access more than 100 pages of information through the screen, of which speed is one.

Although a critical piece of information for regular road-going cars, a speedometer in an F1 car is not nearly important as it might seem. The sheer workload that an F1 driver must manage and the abrupt speed changes make this less critical.

F1 Cars Have Do Have A Speedometer

A modern F1 car produces massive amounts of information for the driver to process. Amongst the data produced by the car is the real-time speed.

These cars also have enormous stopping power and can decelerate from 124 mph (200 kph) in 2.4 seconds. That is a stopping distance of 213 ft (65 meters). In comparison, a high-performance road sedan will stop from the same speed in 890 feet (271 meters).

In cars with such a performance capability, the reading from a traditional speedometer is less critical than you might imagine.

The F1 driver is a master in focussing on what is important, filtering out unimportant data, and concentrating only on the things which will influence his performance on the track.

To give you an idea of an F1 driver’s workload, the following are some stats from the first race of a typical (pre-pandemic) F1 season. This race is held in Melbourne, Australia.

The track length is 10.34 kilometers, and modern F1 cars lap the circuit in just 1minute 14 seconds. In that time, the driver will change gear 50 times (once every 1.48 seconds). He will brake, turn, accelerate and adjust his car’s brake systems bias through sixteen corners ranging in speed from 110kph to 224kph.

The G-Forces he is exposed to can exceed 6g. His brakes are manual with no assistance and require more than 150kg’s of force to activate (that’s the equivalent of the weight of three 50kg bags of cement).

While he is driving the car, he will make eight changes to the rotary switches on his steering wheel (which change the setup of his car); at precise points in the track, he will activate and deactivate the car’s DRS.

He will manage the  MGU-H and MGU-K systems to ensure his battery is sufficiently charged to defend or attack a competitor,

He keeps constant contact with the team back in the pit, giving feedback on his experiences, problems, and strategic possibilities in the race.

He does all of this while maintaining superb situational awareness and understanding his most threatening competitors and where they are positioned.

In perspective, it is a superb management ability exercised by these drivers. Willem Toet, Michael Schumacher’s race engineer, said that he seemed to have the ability to drive the car while having plenty of spare mental capacity to record extra information or discuss strategy with his engineers, Toet explained. “From the feedback I had when I joined the team, this was something that Ayrton Senna also had.”

The speeds vary so frequently that they are less important than other data points.

What Information Does The F1 Car Provide

In addition to the seventeen switches, LEDs, rotary dials, and gear levers, a screen is installed in the center of the F1 steering wheel.

The drivers have access to various data such as:

This vital information is displayed in color on the screen.

Why Is Speed Less Important To An F1 Driver?

Before 1990 F1 racing cars did not have speedometers in their car’s instrument clusters. In those days, cars only had analog dials, and drivers could not select different types of information to show.

The primary measurement came from the tachometer, which displayed engine revolutions. The driver would know the required revs to achieve the highest torque for the car, the optimal gear shift change points, and the greatest speed.

In 1990, when Michael Schumacher was driving for Benneton. He asked for not one but two speedometers to be installed in his car.

He wanted the real-time speedometer to be installed in the center of his dashboard; on the left, he installed a speedometer showing the minimum speed in a corner(this would maintain its reading until he pressed the brakes).

The request was so unusual that the team engineers laughed at him, but they did install the speedometers.

Over time, even this great racer made the point that he could not concentrate on the pace in the middle of a corner, especially when at the apex.

He could not watch his top speed when racing down the straight at 200 mph, as he had to be ready to react at the brake marker.

Although speed is probably the first thing that comes to mind when thinking about F1 racing, the reality is that very high speeds and lap times are the outcomes of understanding and implementation of all the other data an F1 driver receives.

Needing to concentrate on the most relevant data, drivers do not focus on always knowing the car’s speed.

Louis Pretoriushttps://onestopracing.com
Previous article
Best F1 Corners Of All Time
Next article
Where Do F1 Drivers Stay In Austin?