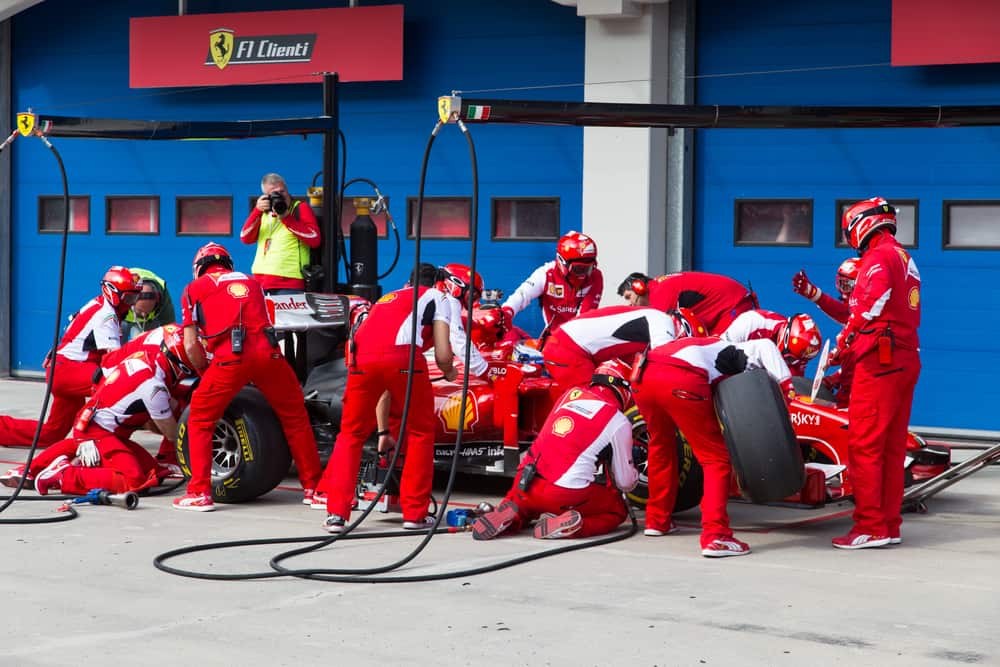 F1 cars are the fastest cars in the world. Their incredible power and speed mean that everything wears out much sooner, the tires, the engine, the brakes… so that was making me think: Do F1 cars refuel?

F1 cars have not refueled since 2010 when the FIA decided to ban them to reduce the cost and increase safety. Currently, the cars start the race with a full tank, and the drivers must manage the fuel well so that they do not run out before crossing the finish line.

It is true that with refueling, there were more varied and exciting strategies, but many times unnecessary accidents occurred that put the lives of drivers and mechanics at risk.

From the Austrian GP in 1982, when the Brabham team tried to start with a half-full tank until 2010, F1 cars refueled during races.

This added another dimension to racing, as apart from the usual tire strategy, there was also the fuel strategy. Teams struggled to find the most efficient strategy, trying to guess how much fuel their rivals had put into their cars, especially when qualifying included setting your fastest lap with race fuel.

Some races were quite exciting with the addition of refueling, although many others weren’t that exciting either. The FIA decided to ban refueling from the 2010 season mainly for two reasons:

The first one cost. The cost of transporting, caring for, and storing fuel is very expensive, so refueling required teams to have more fuel and therefore raised the price. It is estimated that the cost of refueling was around one million euros per year for each team.

The other reason was safety. With refueling, there were many accidents, such as leaks, drivers pulling out of the pit too early with the fuel line still attached, or problems when inserting it, causing fuel to spill everywhere and ending much of them with fires.

In the following video, we can see one of the most spectacular and gruesome accidents related to pit refueling. During the 1994 German GP, Jos Verstappen was making his pit stop, and suddenly fuel from the filler hose spilled out into the car and caused a massive fire, which was put out instantaneously. Thanks to the fireproof race suits worn by the drivers and mechanics, no one was injured.

How Long Did It Take To Refuel In F1?

Since refueling was banned in 2010, pit stops have become much faster, as mechanics only have to change the tires if there is no damage to the front wing. Current pit stops seem like a perfect choreography between the mechanics and the car and last between 2 and 3 seconds.

With refueling, having to insert the fuel hose, wait for it to empty, and remove it, pit stops were much slower and more arduous. Depending on how much fuel was needed, pit stops could last between 7 and 12 seconds.

In the following video Sebastien Buemi, who drove for Toro Rosso between 2009 and 2011, explains one of his pit stops during the 2009 British GP. He also explains how filling the fuel tank affects the driving when leaving the pits:

Will Refueling Ever Return To F1?

As much as many fans and some drivers want it, it is unlikely that, at least, in the short-medium term, it will happen. Apart from cost reduction and safety, F1 is not interested in bringing back refueling.

F1 no longer wants to give the image of excesses, waste, and pollution of past decades. Instead, F1 is becoming increasingly sustainable and efficient, which means the fewer resources used, the better. F1 plans to become carbon neutral by 2030 through ultra-efficient logistics, reduce all its emissions and use reusable materials.

This can be verified, for example, by looking at the evolution of the engines. The sound of the V10 and V8 was spectacular, but they were far from the objectives of F1. The current V6 turbo hybrid engines are the fastest in history and also the most efficient.

In 2016 the possible return of refueling to racing to “improve the show” was debated but was finally rejected, as it had more cons than pros and went against the image that F1 was looking for in the future. Some drivers favored refueling since they could go faster as the car would weigh less, but for the spectators, this difference would not be noticeable.

All that said, if F1 wants to give an image of greater efficiency and sustainability, it would be counterproductive for cars to refuel mid-race.

How Much Fuel Does An F1 Car Use?

F1 cars can use a maximum of 110 kg of fuel per race (305 km / 109 miles). However, teams do not usually fill the entire tank to make the car lighter and therefore faster per lap and less wear on the tires.

The current V6 turbo hybrid engines consume around 34 liters of fuel per 100 km, making them very efficient considering the speeds they reach.

With the arrival of these new engines in 2014, a maximum of 100 kg of fuel per race was set, a third less than previous V8 engines, but it was increased in 2018 to 105 kg and 2019 to 110 due to the new introductions that made the cars heavier, such as the halo or the greater width of the tires and cars.

As we have already mentioned, today’s engines are the most efficient in history. For example, the 2020 Mercedes engine has a thermal efficiency of more than 50%, which means that more than half of the fuel’s energy is used to power the car, representing an increase of around 44% in 2014. As a normal road car reaches only about 30% thermal efficiency, this demonstrates the efficiency gains in F1.

How Do F1 Cars Not Run Out Of Fuel?

In F1, everything is studied in detail. There is a group of engineers responsible for fuel management in each team. In winter testing and during the season, they keep track of certain calculations on the quantity of fuel utilized by the car in each lap, analyze the car’s performance, and modify their calculations according to the car’s changes.

They also take into account the type of layout and environmental conditions that may affect fuel consumption. During free practice sessions on Fridays, teams do long and short runs at race and qualifying pace to see fuel consumption and other variables such as tire wear.

That is why, before a race, the engineers have enough information to know how much fuel to put in the car, without excess but without missing. Once in the race, the driver must manage the fuel consumption through the instructions of their engineers.

Cars rarely run out of fuel. It seems counterproductive, but it was more common for them to run out of fuel when refueling, as teams were risking more.

The fuel used in F1 cars is more like normal cars than you might think. They are 99% alike since F1 fuel contains practically the same components as normal fuel and the difference is just in some additives and their proportion.

Before fuel composition was regulated in F1, almost any type of fuel and additive was used. F1 teams’ suppliers used mixtures with a lot of corrosive power, so the engines had to be disassembled after use for cleaning. These fuels also had harmful effects on health due to their toxic vapors. As of 1989, the FIA (then FISA) decided to regulate the composition of the fuel used in F1 to be as close to conventional as possible.

Additive mixtures tend to change a little from one circuit to another, depending on the characteristics of the layout, and it is always sought that it weighs as little as possible. In addition, each team has a different supplier, which provides specific fuel for its engine. With other fuels, its performance would not be the same.

Can F1 Cars Use Normal Fuel?

An F1 car would not start on normal fuel due to the detonating power of one and the other. The octane number of normal fuel is much lower than that of F1. A high octane number creates a phenomenon known as self-detonation, which causes the fuel-air mixture to spontaneously ignite before the flame explodes.

However, in the hypothetical case that it could start, the cars would barely go a few tenths per lap slower as the two fuels are so similar. This would be a notable difference in qualifying and in the race, where the times between cars are very tight, but they would not be so slow in terms of speed.

How Will F1’s Sustainable Fuel Be Made?

By 2022, F1 will change the fuel composition to be more sustainable and will become 90% fossil fuel and 10% ethanol, compared to the current fuel that is 5.75% ethanol. F1 rules will mandate that the 10 percent ethanol must be “second-generation biofuel” that has been produced sustainably, meaning it will have a near-zero carbon footprint.

However, this is only a small step for the future. To meet its net-zero carbon footprint commitment by 2030, F1 will use a fully sustainable fuel from 2026, when its new engine regulations take effect.

This new fuel will be laboratory-created, made from a process that harnesses carbon capture, municipal waste, or non-food biomass. It is estimated that it will produce 65% fewer greenhouse gases than normal fossil fuels.

This would have great benefits not only for sustainability and efficiency but also for F1 itself since it is expected that changes like this one can attract more manufacturers since the world’s big car brands are also involved in sustainability projects.

It is reported that the Volkswagen Group has been involved in negotiations to enter F1 from 2026 when these changes occur, with one of its major brands Audi or Porsche (or even both).

Times change, and F1 changes with it. Before, the “cool” was excess, luxury, and waste, while now the important thing is sustainability and the environment. Refueling was banned for precisely that reason, although many opposed this change. That is why fuel consumption is also decreasing, and engines are increasingly efficient.

We must remember that neither past times were so good and times to come are not so bad. Everything changes, not necessarily for the better or for the worse; it just changes. We fans are eager to see where F1 evolves with these sustainable changes and how beneficial they will be for competition and racing, which is the most important thing.