Do F1 Drivers Keep Their Trophies? 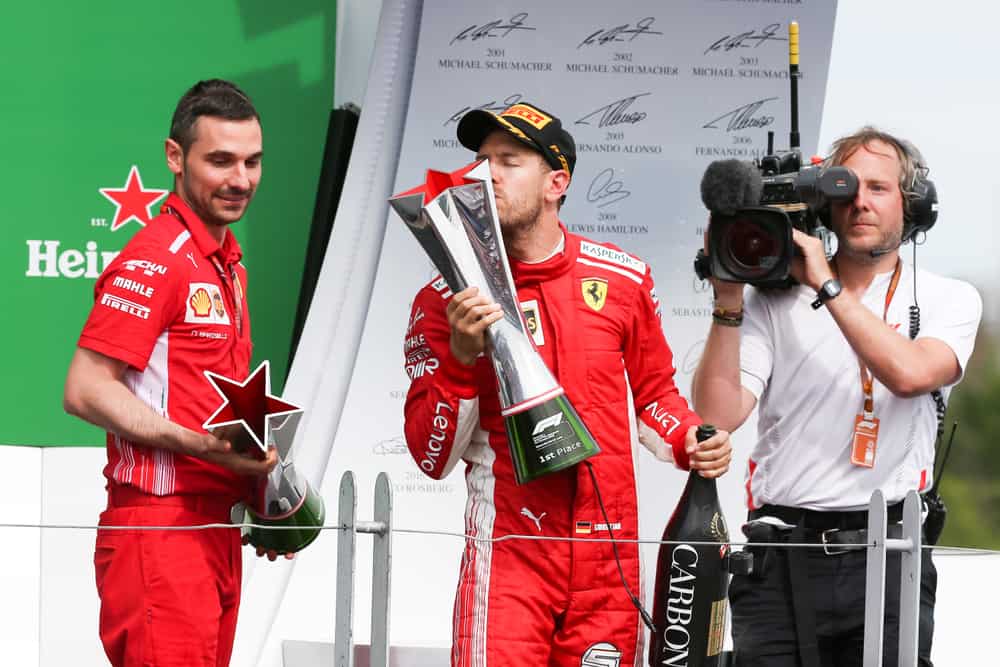 All drivers dream of winning races and championships. After all, everyone is there to fight to be the best. In F1, as in many sports, the first three receive trophies, and that makes me think, do F1 drivers keep their trophies?

Big teams like McLaren or Red Bull have special places in their headquarters to keep and display their trophies in showcases like museums. There are many more unanswered questions on this topic, so let’s get into the details!

Do F1 Drivers Keep Their Trophies?

Drivers drive to win and be the fastest, and with it, win trophies and merits throughout their lives. However, they usually cannot enjoy their trophies since teams typically keep them at their headquarters to display and keep them there.

At the end of the day, if a driver wins, it is thanks to his team. The trophy is not only for the driver but is for the entire team. However, this is not always the case, and certain teams or drivers have clauses in which they can keep their trophies and have them in their own homes, although it is not the most common.

Some teams give their trophies to their drivers when they retire as a tribute or drivers who negotiate with the teams to have them and display them.

This is the case of the Fernando Alonso museum, which has many of his trophies, cars, and equipment from his sports career to show off to fans, obtained through donations from teams or directly purchased.

Does The F1 World Champion Receive A Trophy?

The first three drivers to make the podium receive a trophy in each race, but does this also happen at the end of the season with the championship classification?

However, F1 has a peculiarity, and that is that, unlike other sports, where the winners receive their trophy at the end of the event, in F1, they receive it on another date.

When Are The F1 Champion Trophies Awarded?

This confuses many people, as when watching the last race of the season, they believe that the championship-winning driver will receive his trophy that day, but he is not.

And it is that the F1 World Drivers Championship trophy is given and received at the annual FIA Price Giving Ceremony, which is a separate event from the last race, on another date. Prizes from various FIA events and categories are given at this ceremony, including those from F1.

The main reason that the prizes are awarded on a different date is that, unlike other sports, there is always the possibility that the result of the final race will change in the days after it is contested. Drivers can be penalized for their actions on the track or irregularities in their cars, so it is held a few days later to ensure that the result is official and final.

Traditionally, different trophy designs have been used for each Grand Prix, with some reference or aesthetic of the country where the race is held, so there is no specific F1 trophy image.

Although this is still being done, a phenomenon has been taking place that neither fans nor drivers like in recent years. And it is that in the last decade or so, sponsors have heavily started to influence the trophy designs. SEGA began this trend back in 1993 European GP when they gave a Sonic trophy to the race winner Ayrton Senna.

Santander was the first company to regularly place its brand on trophies in the late 2000s, which was just their logo on a metal block, and several other companies such as ENI, Singtel, Johnnie Walker, and Singapore Airlines have done the same.

The one that stands out the most is Heineken, which since 2017 when they came to the sport, has been making the same trophy over and over again, sponsoring up to four or five trophies per season. And the problem with these trophies is that they are quite boring, and there is no real design element.

There is also the problem of many trophies, which, although they are not sponsored by any company, are very similar. Hopefully, this trend will change, and we will see more original and iconic trophies, although it is true that there are still some that are a beauty.

What Does The F1 World Champion Trophy Look Like?

The F1 World Champion Trophy is one of the most beautiful trophies of all sporting events, and you don’t usually see much of it, nor do people usually know what it is like.

It is a towering silver jug with gold lining, featuring the name of every champion dating back to the inaugural championship in 1950, and in the case of the Constructors’ Championship, with the logo of each winning team.

In addition, if you search for photos on Google of the trophy, you will see that it is always in luxurious places and surrounded by people in suits since it is a trophy that is only exhibited on certain occasions and in certain places full of glamor.

Trophies are part of the aesthetics of F1 since they have always been present in races from the beginning, and although currently, drivers do not tend to keep them, it is the teams that do.

The good news is that fans can see and enjoy them in the exhibitions and museums of the teams in this way.