Do Formula 1 Cars Have Brake Lights? 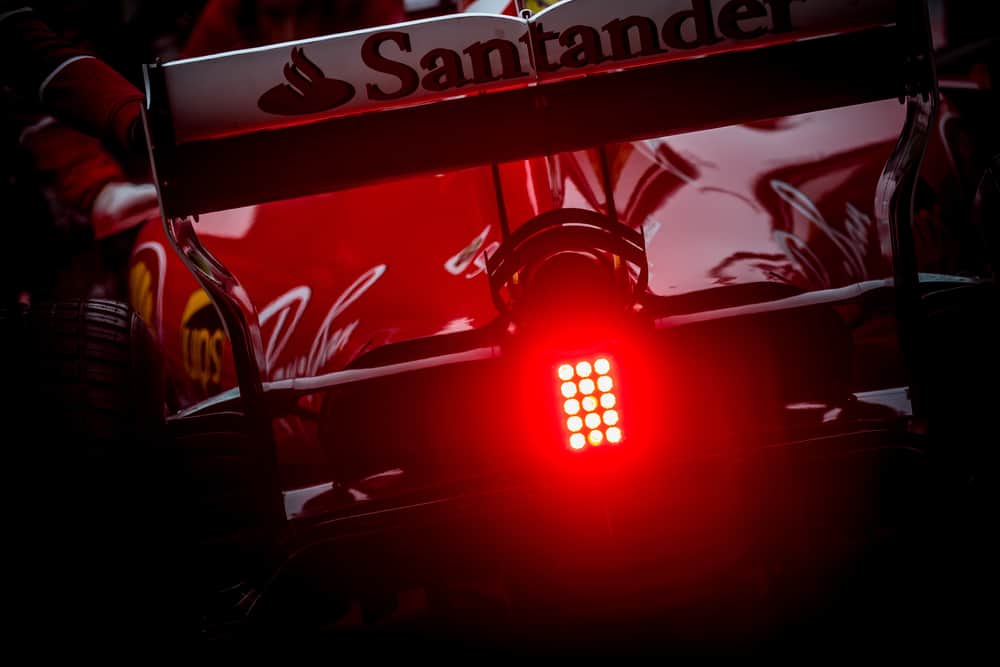 This article will explore why Formula 1 cars do not have brake lights and, following on from this, how drivers know when the car in front of them is expected to down. We’ll also look at what the small orange light on the back of an F1 car does (it’s not a brake light) and why it is permanently on in treacherous conditions.

Why Do Formula 1 Cars Not Have Brake Lights?

Formula 1 cars do not have brake lights because they would be unnecessary and pointless. The purpose of brake lights on road cars is to alert the drivers behind you that your vehicle is coming to a stop or slowing down. This can prevent cars from being rear-ended by someone behind them.

However, in F1, having brake lights to alert the drivers behind a car wouldn’t fulfill this purpose. This is because F1 cars are going at such high speeds that they would not stop in time by the time they have seen the brake lights of the car in front of them.

While, at first glance, this does seem dangerous, it isn’t as bad as it sounds. Firstly, unlike driving on a public road, racing tracks are well protected. This means that the chance of an errant pedestrian or animal crossing the track is almost zero. Furthermore, the tracks are well maintained, so there won’t be any potholes or debris on the track.

This means that the chances of an F1 driver having to slam on brakes and come to a complete halt are incredibly slim. Therefore, it is unnecessary to have a system that alerts drivers of this because it would barely ever be used. It would also be pointless as the car behind wouldn’t be able to stop in time anyway.

Furthermore, drivers usually brake at set points on the track just before a corner, known as braking points. Therefore, there are sections on the track where drivers can expect the car ahead of them to slow down, and they will also likely do the same. Read on to find out more about braking points and why they are so helpful for drivers.

Here is a perfect example of an F1 driver slowing down suddenly and the car behind him not being able to stop in time. This video shows that even if the car in front had brake lights, the incident couldn’t be avoided due to the high speed of the car behind it.

What Is A Breaking Point?

As previously mentioned, there are specific sections or markers on the track where drivers will usually brake. These are always before corners where drivers must slow down. If drivers brake at these points, they will have reduced their speed enough to navigate the corner safely. The key to braking for a corner is not to do it too early as you’ll lose momentum too early or not brake too late; otherwise, you’ll likely end up off the track due to your high speed.

These are not exact markings on the track but instead just based on specific landmarks on the track. Some drivers may use a tree near one corner, and on the next, it may be a track marking or board on the side of the track. Once they draw level to this point, they will apply pressure on the brakes. This point will change slightly depending on the fuel load, but the change won’t be radical, so the braking points will remain at a similar pace throughout the race.

This is possible in F1 for multiple reasons. The first is that drivers are all experienced racers and instinctively have an excellent idea of when they should brake. Furthermore, by the time the race has started, drivers have had lots of time to practice and know the track well.

In the weeks leading up to the race, drivers will study the track and spend time driving in the simulator on that specific track. Once the drivers arrive at the physical track, they will usually cycle and walk along to study it even more. This is done with other team members so that they can discuss racing strategies on the track. They also are given time on the Friday and Saturday of the race weekend to run practice sessions to allow them to get some time on the track without being under pressure.

Therefore, by the time the drivers begin racing on a Sunday, they know the track very well and understand where they need to brake. The other drivers will also be aware of cars braking at these points, so they will be prepared for the car in front of them to decelerate.

What Is The Orange Light On The Back Of An F1 Car?

You may have noticed that F1 cars now have a small orange flashing light at the car’s rear in recent years. This light serves two purposes. They are:

F1 cars can convert the heat energy from the engine and things like braking into useable energy. F1 cars make use of combustion engines which produce very hot air as a by-product. In road cars, this is mainly lost through the exhaust pipe. While F1 cars also have exhaust pipes, they have a system known as the Energy Recovering System (ERS) that converts this heat into useable electric energy.

Part of this system acts as a generator for the car and is responsible for providing some power to the car during the race. However, it is quite a complicated system, and the internal workings are not relevant to this article. If you want to learn more about it, you can do so here.

However, what is relevant is that when this system is being utilized and essentially charged (it doesn’t happen every minute of every race), the light at the back of the car flashes. This is to indicate that this process is happening and that the car may be going slightly slower at that moment.

During low visibility conditions, such as during heavy rain or mist, the light on the back of an F1 car will be permanently on. The purpose of this is to function as a warning light for the cars behind it. This helps cars see if another car is in front of them and can help avoid collisions.

Having a warning light for poor visibility conditions is particularly important in F1, as drivers are still expected to race in these conditions. In wet weather, the braking ability of cars may also be compromised due to the lack of grip provided by the track, so it is vital to see cars in front of you.

As the car may be going slightly slower during the energy harvesting phase, it also acts as a warning light.

Formula 1 cars do not have brake lights because they would not really serve many purposes. Once a driver has seen a car’s brake lights in front of them, it would be too late to come to a stop. However, this is not dangerous like it would be in normal life, as tracks are free of obstacles, and cars are expected to brake at specific points (just before corners) on the track.

Louis Pretoriushttps://onestopracing.com
Previous article
Do Go Kart Tires Have Tubes?
Next article
Do Short Bikers Have An Advantage In MotoGP?