Do MotoGP Bikes Have A Battery? 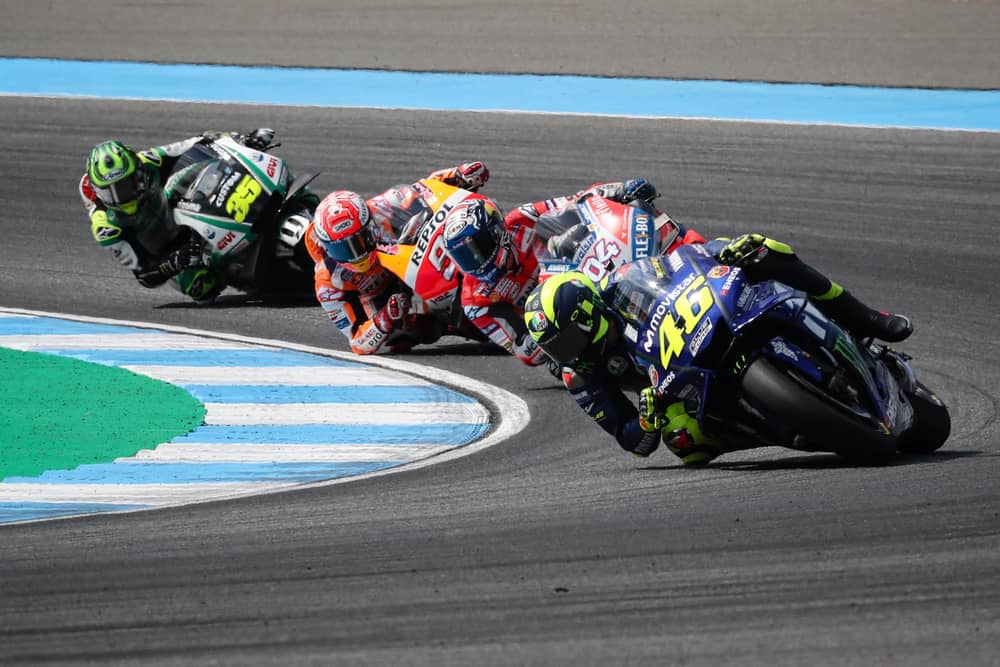 If you’re new to the sport of MotoGP or you’re an existing fan trying to learn more about how MotoGP bikes are manufactured, you might have come across something about the fact that MotoGP bikes do not have batteries. As unbelievable as it may seem, the true answer to this question may surprise you.

MotoGP bikes have a minimum weight restriction of 346.1Lbs (157kg), and ideally, MotoGP bike manufacturers would have the bike weigh as little as possible while pushing out as much power as possible. Since MotoGP bikes do not use batteries, they must resort to other methods for the bike to get started.

The Reason Why MotoGP Bikes Don’t Have Batteries

MotoGP bikes do not have batteries as they are designed to be as light as possible to improve the bike’s power-to-weight ratio. MotoGP bikes use different methods to get started than road bikes, which use an electric starter. Manufacturers must also adhere to certain restrictions and specifications that a MotoGP bike must meet so it is considered legal to be raced.

How A MotoGP Bike Starts Without A Battery

Using A Roller To Start A MotoGP Bike

This method of starting a MotoGP bike is done by the rider pushing the bike forward on the track, and while it is in motion, the rider must jump on and put the bike into gear while the back wheel is moving to push start the bike.

The Differences Between MotoGP Bikes And Road Bikes

Not having a battery in a MotoGP bike is only one thing that sets these apart from your everyday road bike. There are many differences when comparing these two categories of bikes, which include differences in both the design and the performance of the bikes.

Differences In Design Between MotoGP Bikes And Road Bikes

Many things are designed differently for these bikes as they both serve different purposes. Some of the biggest visual design differences are that, unlike road bikes which have headlights, brake lights, indicators, starter motors, mufflers, and side stands, MotoGP bikes do not have any of these included in their design.

Leaving these elements out of the design for a MotoGP bike is done to save on weight to ensure it can be manufactured as light as possible to improve its power-to-weight ratio. Unlike road bikes, however, MotoGP bikes are designed with a rear rain light.

Differences In Performance Between MotoGP And Road Bikes

Differences In Tires Between MotoGP And Road Bikes

A key difference in the design of these two bikes is the type of tires each bike uses. Road bikes have tires with various grooves engraved into them, which is known as the tread. This tread allows road bikes to maintain traction, reducing the risk of tires slipping on wet roads.

Differences In Brakes Between MotoGP And Road Bikes

Differences In Gearboxes Between MotoGP And Road Bikes

MotoGP bikes use “seamless gearboxes,” allowing a very limited amount of time for two gears to be engaged simultaneously. This allows MotoGP riders to have smoother gear shifts and faster acceleration compared to the design of the gearboxes of road bikes which only allows one gear to be engaged at a time, resulting in slightly longer gear changes and slower acceleration.

Differences In Suspension Between MotoGP And Road Bikes

Differences In Chassis Between MotoGP And Road Bikes

The body and chassis of both road bikes are the same apart from the material from which they are constructed. To allow for the lightest and strongest build, these parts of the MotoGP bike are made from carbon fiber. Manufacturing these parts from carbon fiber allows the bike’s build to be strong and lightweight, contributing heavily to a much better power-to-weight ratio.

MotoGP bikes do not have a battery as they are designed in such a way that they are as lightweight as possible. The exclusion of a battery means that you cannot start MotoGP bikes using an electric starter and, therefore, must either be started using a roller or push started by the rider.

MotoGP bikes are designed differently from road bikes to allow for the best possible power-to-weight ratio. There are a few aesthetic and design differences that set MotoGP bikes apart from road bikes; however, the biggest differences are the tuning of the electronics, the technology used, and the materials used to manufacture MotoGP, which give it the real edge over road bikes.

Louis Pretoriushttps://onestopracing.com
Previous article
What Are F1 Tires Filled With?
Next article
Which Is Faster, H2R Or MotoGP?