Do MotoGP Bikes Have ABS? 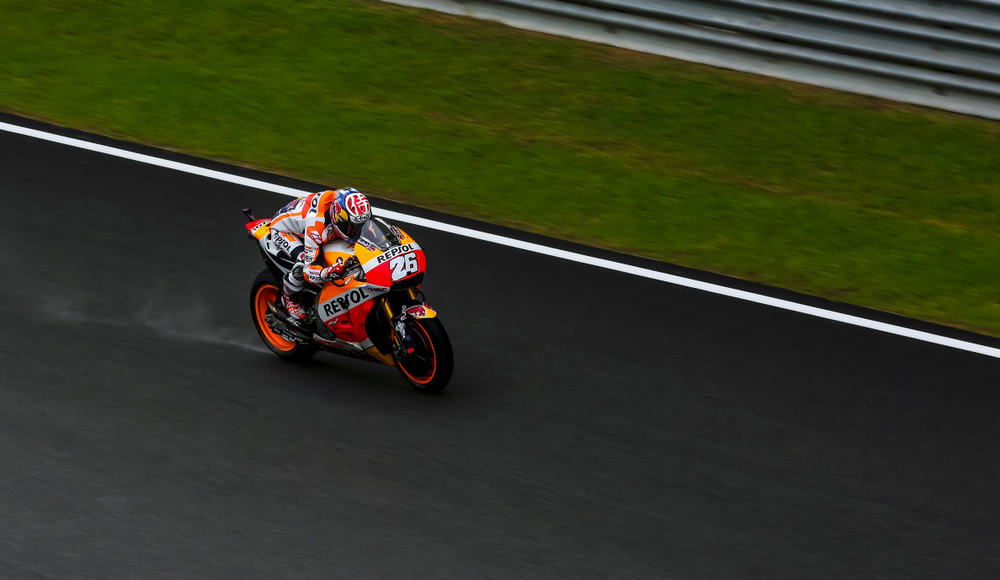 Since ABS or Anti-Lock Braking System, now comes standard on most modern vehicles. As it is a proven safety system (and has been for 40 years), race fans may expect that it would be fitted by the manufacturers to all high-speed vehicles, without exception. I mean, safety is paramount in racing, agreed?

Despite expectations, MotoGP bikes do not have ABS, which is designed to prevent rear-wheel lock-up when braking and maintain contact with the racetrack’s surface. Instead, they use disc brakes and Traction Control, which forces the rider to control the bike’s braking himself.

True fans of racing – in any discipline – are never happy to see an athlete get injured, but neither do we want to watch flavorless racing, devoid of spills and danger. Marc Marquez and Dani Pedrosa tested out an ABS as far back as 2014, riding bikes with two rear ‘ training wheels, one on either side of the rear wheel.

Conclusive tests showed that ABS allowed the bikes to break hard in wet conditions and remain upright, while tests conducted with the training wheels, sans ABS, clearly showed that the front tire washed away in the same conditions.

FIM (International Motorcycling Federation), the body that governs MotoGP, decided, however, not to allow teams to use ABS, seemingly to ensure that the onus falls more to the team and rider as well as the setup of the bike, rather than this particular technology to provide safe cornering.

What is the Alternative To ABS?

Traction Control in MotoGP is essential to keep the bike’s wheels in contact with the track and provide as much grip as possible. Thus, he can avoid oversteer and ‘high-siding’ (The action of a rider to imitate a rocket and fly over the handlebars, resulting in what is usually a rather painful landing.)

The Inertial Platform in the IMU (Inertial Measurement Unit) detects the lean-angle, while sensors in the wheels check the wheel-spin amount. The unit indicates how much grip the tires have and how much traction they have with the surface. If the rear wheel loses traction – i.e., the grip drops – and the wheel starts spinning faster than the front one, the rear wheel might swing wide, causing over-steer.

Should this happen, the sensors communicate to the ECU (Engine Control Unit), which slows the power output by

This change is vital, as it prevents the bike from suddenly regaining grip, which could cause a high-side crash, potentially injuring the rider.

The teams structure the traction control to each rider and bike combination, and they can customize it for every turn, as no two circuits are similar, let alone the same.

Tire grip will decrease due to

and the traction control counters this by adding traction to maintain contact with the track.

Riders can change the degree of traction control during the race. More TC for low grip and less TC for high grip.

Programmed by teams via the Unified Electronics System, Traction Control’s aim in modern MotoGP is not to stop wheel-spin entirely but rather to optimize it, matching a ‘target spin’ for each scenario by moving between a complex blend of power-cutting behavior.

Do MotoGP Riders Use Rear Brakes?

Some do, and a great many MotoGP riders operate the rear brake in more than one way.  They use the conventional right-side foot pedal as well as a brake lever placed near the left thumb. Instead of using the rear brake to slow the bike distinctly, they maintain balance by controlling the rear wheel’s washing-out effect. This effect also slows the rear tire down on approach, thus preventing the front wheel from diving in and the rear wheel from lifting too far.

The rear brake is also used to slide the rear out and point the bike in the direction you want to go so that it can accelerate at a faster rate when you stand it up.

Fun Fact – The thumb brake lever was initially developed in the 1990s to assist Australian World Champion Mick Doohan following a severe injury to his right leg, which prevented him from operating the brake lever with his right foot.

Still in use by many riders, particularly after an injury occurs to the right foot or leg, the lever has specific characteristics. As described by Andrea Dovizioso, “The force you can apply with your finger on the thumb master cylinder is a great deal less than that which can be applied by foot. That is why he only uses it when the bike is leaning over at the maximum lean angle.”

Much also depends on the bikes themselves, and the braking style has a lot to do with the setup. The Yamaha doesn’t like to have its rear end hopping around going into corners, which causes the bike to go wide. Conversely, the Honda seems to enjoy having the back end sliding into the corners.

What Rear Brakes Are Used On MotoGP Bikes?

The discs and the pads are manufactured by Brembo, from carbon which provides some serious stopping power and consistency during a grueling 150km/93mile race. Recent statistics show these highly specialized brakes allow a MotoGP bike to go from 300kph to under 100kph in about 5 seconds using only 300m/328yd of the track. These discs can handle temperatures of up to 800degrees C.

MotoGP bikes do not have ABS (Anti-skid Braking System), as the organizing body, FIM, bans it, but instead rely on a – usually – single disc brake at the rear and also Traction Control to slow the bike into the corner.