Do MotoGP Bikes Have Neutral? 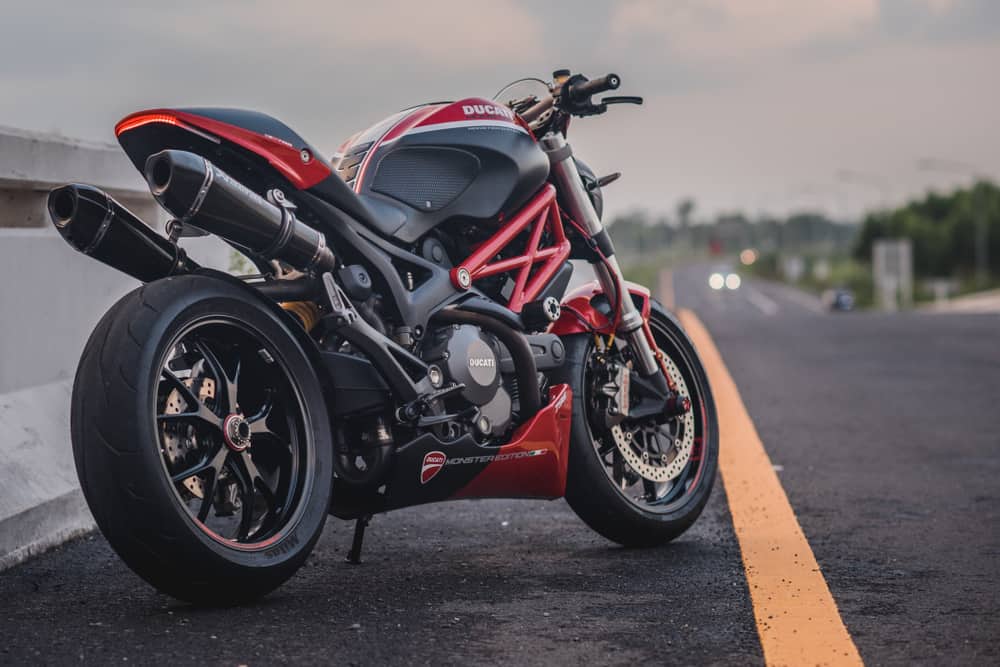 MotoGP bikes are instruments of precision, topping out at over 200mph and decelerating with the force of almost 2gs. As such, these bikes have been designed with the sole purpose of going as fast as possible. Furthermore, there is no stopping and starting in MotoGP, so is the gear of neutral really necessary, and do they have them?

MotoGP bikes do have a neutral gear; however, due to the gearbox’s design and structure, it is situated in a different position when compared to that of a standard street bike. Gears on a MotoGP bike are reversed with neutral placed below the 1st gear instead of between gears 1 and 2. An actuated lever needs to be pressed for the bike to be placed in neutral

To understand where neutral is situated on a MotoGP bike and if they even actually have a neutral, we first need to compare the gearbox of a standard street bike that has neutral to that of a MotoGP bike gearbox. By knowing this and understanding the differences, we will see and be able to tell where and why the neutral gear is situated where it is.

There are many similarities between street “racing” bikes and MotoGP bikes in today’s modern world, and the lines are getting more and more blurred between the two. However, there will always be key features that separate them from one another, and that’s why MotoGP bikes will cost in excess of $2million.

One of these features is how the gearbox on a MotoGP bike is designed to that of a regular street bike. In essence, this is such an integral part of any vehicle (even a car or boat), and a MotoGP’s gearbox is designed differently for a number of various reasons.

We will consider all these reasons, and then this will help us get a better understanding of why the gearbox is structured this way and then if there is a neutral and where is neutral on a MotoGP bike.

Typically on a street bike, you will have the first gear, which is the lowest gear and is situated at the bottom of the gear pedal. It also means you would need to push down on the foot pedal to get to it. Neutral is located above it, and then to move up through the gears, you would move the foot pedal up, reaching the top gear  (which is usually gear number six) at the top. Hence the gearbox is structured in such a fashion;

Looking at the list above, keep in mind what we discussed, that gear 1 would be the most bottom gear that you would push the gear pedal down to get to, and then subsequently, you would have to lift the gear pedal to move up through the gears.

As we can see on a standard street bike, you do have neutral (which is located between the first and second gears), and with any vehicle, this is necessary. Neutral is essential for when the bike engine is running, but it is not in motion (meaning it is not turning and propelling the pistons to turn the wheels).

You would need and use neutral when coming to a stop at a sign or crossing and then in some instances, even if yielding.

When considering the gears of a MotoGP bike, you will find that the neutral is not situated between gears 1 and 2, and besides that fact, the gears are in reverse order to that of a standard street bike.

Before we get into details in terms of where neutral is situated on the MotoGP bike, let’s first explain why the gears are in reverse order.

The main reasoning behind a MotoGP bike having gears in reverse order is that when a rider takes a corner, the bike’s tilted angle is at approximately 60 degrees. This means that if the gears were positioned as they are on a standard street bike, the rider would have to try and get his foot under the pedal to shift up through gears when reaching the corner’s apex.

Due to the angle of the bike being so drastic, the rider’s foot would surely hit the tarmac when trying to change gears through a corner. Hence, a MotoGP bike’s gearbox is in reverse so that when a rider breaks before the corner and starts to accelerate through and out of it, they just need to push the foot pedal down rather than trying to get their foot under the pedal and try to push it up.

As you can imagine, if a MotoGP’s gearbox was positioned the same as a street bike, then when taking tight and fast corners, there would be many accidents, and besides that, they would definitely have to take the corners slower to reduce the tilt angle, which would allow them to get there foot under the pedal. This would not allow for exciting racing trying to get the riders to go as fast as possible.

Considering neutral on a MotoGP bike

Due to the fact that MotoGP is a racing sport and there is not a lot of stopping except for crashing or pitting, neutral does not play an integral role in the design of the bike as it does for a street bike. Hence, neutral is not situated between gears one and two even though the gears are almost exactly the same as a street bike except in reverse order.

However, you still need neutral on a MotoGP bike for various reasons such as starts, dyno tuning, and more, but for the purpose of racing, it would just get in the way if it was situated between gears. Hence, the designers and manufacturers have placed neutral below the first gear, and it requires a lever that is actuated to position the bike into neutral.

Hence the gears and neutral on a MotoGP bike will look as follows;

As you can see from a racing standpoint, this is by far a much better and appropriate layout for a racing situation and hence has been employed throughout all Moto|GP bikes. This is, in fact, considered standard practice.

Just take note that you are viewing the list from the standpoint of the top of the list being the top of the foot pedal, and if you compare it to the street bike gearbox list we detailed, you will see that it is reversed and that there is a neutral but it is situated above gear number one and not between gears one and two.

MotoGP is a sport that takes riders on a racing bike to speeds in excess of 200mph, and as such, the bikes have to be designed and manufactured specifically for racing in every possible way. This is very apparent in the way the gearbox of a MotoGP bike is structured, which is actually in reverse to that of a standard street bike.

There is a neutral on a MotoGP bike; however, it is situated above the first gear and requires the use of an actuated lever to place the bike in it. A MotoGP bike is designed this way to get the maximum efficiency and performance out of bike and rider when taking corners and maneuvering through gears.

Why exactly are the MotoGP gear shifters different from regular bikes? What other small differences can be found that even a die-hard MotoGP fan wouldn’t know?

MotoGP-neutral is not between 1st and 2nd

Louis Pretoriushttps://onestopracing.com
Previous article
Do Formula 1 Drivers Drive With Both Feet?
Next article
Can I Drag Race With A Cracked Windshield?