Do MotoGP Bikes Have Traction Control? 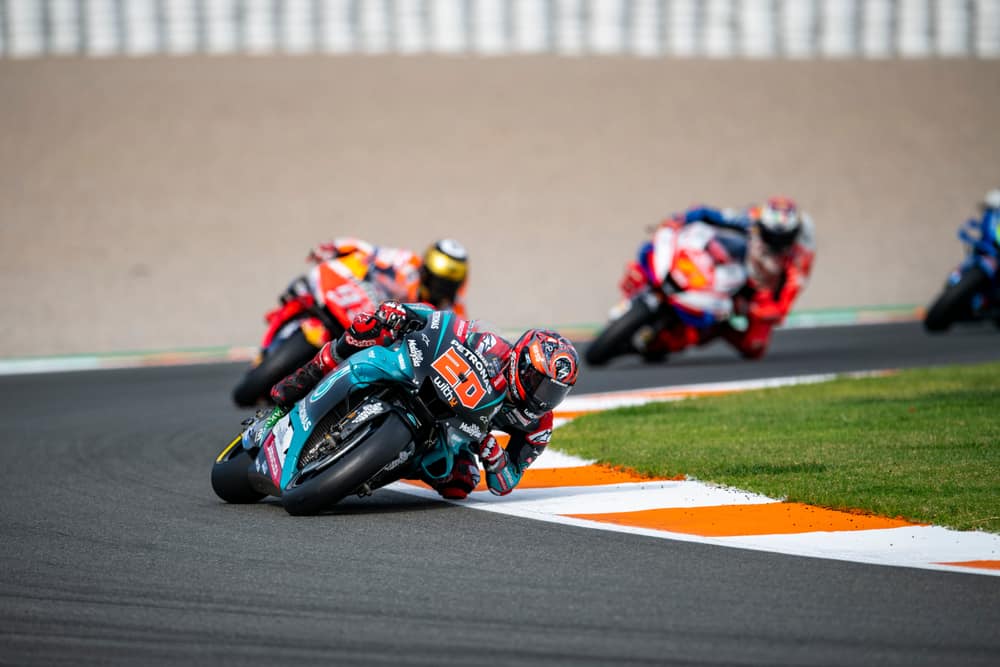 Before 2016 the MotoGP teams used individual, which featured a range of interventions, including traction control, anti-wheelie, engine-braking control, and launch control. While it enabled the riders to go faster and improve lap times, the bikers complained that the boxes were doing all the work!

The latest MotoGP bike series have bikes fitted with a standardized IMU (Inertial Measurement Unit) installed on all bikes. This unit is designed to prevent bikes from skidding out of control, particularly when going around fast corners, and to prevent the bike from wheeling.

Since 2016 MotoGP bikes have been fitted with unified traction and anti-wheelie system, which overcomes the problem of the previous systems while helping the rider achieve faster tome, more safely.

For the 2016 season, the rights holder of MotoGP, DORNA, pulled off a master stroke in that they persuaded all of the manufacturers to adopt a new, unified Traction Control system.

The system has two protections.

A bikes tire performance is affected by:

The traction control system balances these factors and enables the rider to achieve the most consistent and high-speed circuits possible.

The traction control system used on MotoGP bikes works by keeping the wheels in contact with the track’s surface, improving the tire’s grip.

It does this by:

The IMU consists of a gyroscope and several accelerometers that measure the bike’s attitude on six planes.

With the number of measurements constantly taken every microsecond, the system can modify the bike’s ride with infinitesimally small adjustments.

The system does not eliminate all tire slipping or skidding; instead, it keeps it within a preformatted range defined by the engineers and the rider.

If the rear wheel (drive wheel) starts losing traction, it will begin to spin faster. When the difference in rotational speed between the rear and front wheel exceeds 12% (personalized by the driver), the system activates.

In a corner, if the back wheel speed exceeds the front by more than this margin, it will force the back of the bike wide and create oversteer, leading to a loss of control.

It does this in a very controlled way because if there were a sudden, abrupt intervention, it would cause the bike to over-respond, which may also cause loss of control.

When this happens, the system communicates with the bike ECU (Engine Control Unit), which reduces the amount of torque on the back wheel by one of the following interventions.

The way the intervention happens is critical; if it were too sudden, the back would immediately regain traction causing the bike to regain grip and the rider to lose control suddenly.

Although the system is common to all teams, the engineers are allowed to personalize it for each rider’s preferences and the bike’s characteristics.

In addition to this, the teams also adjust the settings for each track because they all have unique characteristics.

When a rider changes the bike’s balance by increasing the torque on the rear wheel, the angular momentum is changed, which removes the weight from the front wheel, which lifts up in what is called a wheelie (also known as a wheel stand).

While it is great to look at, it is inefficient in accelerating the motorbike because some of the torque that should be applied to make the bike go forwards is redirected to lifting the front wheel.

The system installed on all MotoGP bikes controls the torque applied to the back wheel.

The forces which are measured before the system is enabled are as follows.

When this happens, the system will intervene.

The Suspension Has A Sensor

The front shock absorbers have sensors that measure the height of extension.

This sensor can determine the position of the front shock absorber (fork), so when it is fully extended, it is a good indication that the front wheel has left the ground.

When this condition is in place, the system will intervene and communicates with the Engine Control Unit (ECU)..

The system works similarly to the traction control in that to stop the wheelie, the ECU will carry out one of the following actions.

Are MotoGP Bikes Easy To Ride?

There is a meme available that asks the question.

“Can anyone ride a MotoGP?”

“Every amateur who rides a MotoGP bike has two experiences.

“The first is a high-speed exciting ride” – shows a picture of a MotoGP bike traveling very fast.

“The second is very slow” – shows a picture of the rider being loaded into an ambulance.

The systems are not designed to make the rider a robot who only pushes buttons.

The electronics on a MotoGP have not made the bikes any easier to ride. Instead, they allow the rider to push the bike to more extreme limits and achieve faster lap times.

In MotoGP’s constant quest to balance the rider field’s competitiveness against the riders’ safety, they have introduced the IMU (Inertial Measurement Unit) as standard fitment on all MotoGP bikes.

This special equipment has increased the lap times the riders achieve and contributed substantially to riders’ safety.

Louis Pretoriushttps://onestopracing.com
Previous article
Who Owns F1?
Next article
How Much Does An F1 Car Weigh?