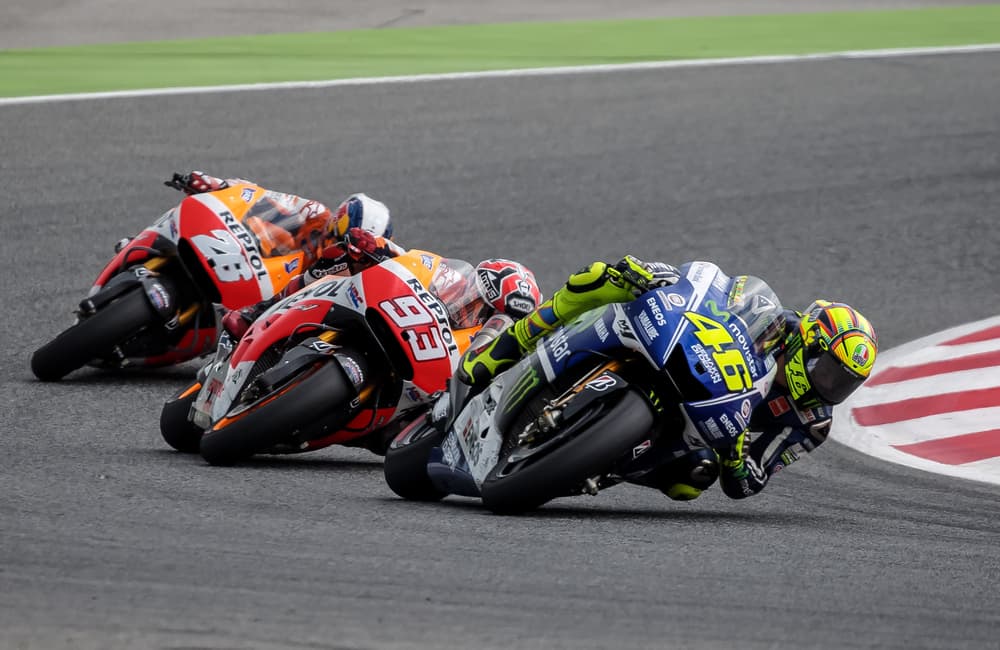 For most new riders and many of the millions of MotoGP fans around the world, the issue of counter-steering a bike around a potentially dangerous bend or a stationary object in the road is counter-intuitive and just sounds dangerous at best. We’ve all seen cars counter-steering as they hit a slippery road, possibly in a chase scene from a movie, with front wheels aiming right as the rear slides out and the driver avoids a roll, but what about a MotoGP bike screaming into a corner after high-speed corner in both wet and dry conditions? Do MotoGP riders counter-steer?

Although it defies belief at first, MotoGP riders do counter-steer, using the technique on almost every corner, particularly at speed, and also when having to suddenly evade debris or fallen riders on the track.

Leaning into a corner or bend without counter-steering will only allow you a certain amount of speed and tightness of turn before one or both of your wheels washes away and you get some great action pics of a gravel slide from your bike’s camera. Since your entire hopes of winning – or even finishing – the race rest on speed and staying on the bike, this issue is vital…

Simply put, counter-steering is steering in one direction to go in the opposite direction. So…you steer right to go left around a bend. Sounds nuts? Of course… but provided you do it correctly and realize there are a few caveats to observe, you’ll be a lot more confident on the open road, or, if you’re one of the lucky ones, racing around the circuit.

Imagine you are rolling down a gentle decline on your bike (this applies to bicycles too, if you’d like to explain this to your kids in a way they’d understand), you press forward briefly on the left handlebar, and two things happen:

This is the essence of counter-steering, stripped of all detail, but you might want some of that missing detail if you plan to negotiate bends at potentially high speeds or at least understand why Marc Marquez & Company take the bends as if on railway tracks.

Your first caveat in this regard is this: Do not confuse counter-steering with what takes place in Supermoto or Speedway, where the riders allow their bikes to drift around the corners. Note there is a slight angle of the front wheel to the right as a rider takes a left turn…

Why Do MotoGP Riders Lean?

Counter-Steering the front end alone will not bring a 650hp monster round the turns of Circuit of the Americas or Sepang (in Malaysia), for example, and a lot of body positions are required, not the least of which is leaning into the bend whilst counter-steering, which is a vital part of the process.

The body shifts the center of gravity to the correct position, determined by the speed of the bike and the characteristics of the bend. At an appropriate moment, more fuel is provided to the engine by way of the throttle, and the machine accelerates forward.

How Far Can You Lean When counter-steering A MotoGP Bike?

Somewhere between vertical and horizontal is the perfect lean angle, though of course, this will change based on several criteria –

In theory, you can lean until the foot-pegs start to scrape, but this does increase drag which will slow you down and increase the risk of a slide. MotoGP bikes can offer a lean-angle as great as 60 degrees plus…

Marquez reached a lean-angle of 70 degrees at Phillip Island in Australia in 2019, which no-one had ever done without losing the bike…and yes, he kept the bike up.

His tires washed away, and he supported his entire bike on one knee before pushing off that knee and incredibly righting the bike. Do not try this at home!

Generally, riders tend to lean to a point where their knee-guards come close to touching the ground but do not quite get there. However, Marc Marques used his knee as a fulcrum to support his Repsol Honda after that wash-out, and I’ve seen his elbow on the ground as he negotiated a turn on several occasions, though this is rare.

On occasion, riders will touch the ground with their knee-guards, but friction creates drag, as we know, and this will slow the rider’s pace if repeated too often, so it is avoided.

Understanding The Magic Of The Missile

Often referred to as a ‘missile,’ a MotoGP bike can speed over 210mph / 340kmph, as recorded by Andrea Dovizioso on a Ducati around the famous Mugello circuit in Italy in 2019. Of course, at these speeds, there are huge forces at work on both the bike and the rider, and physics plays a vital role in everything from the bike’s set-up to the way the rider brakes and corners. If science is not your ‘thang,’ just hang tight…this will certainly help clarify the issue of cornering at high speeds –

Several forces are in play on rider and machine –

Now, you lower the bike’s momentum by braking, and as you lean into the corner, the bike is pulled to the center of the rotation by the centripetal force, which is being challenged by gravity which wants to pull you down. The greater the lean-angle, the greater the pull of gravity, and we all know where that leads. Too little lean-angle, and you won’t make the turn, and that result is not much better.

There are other forces (and even fake forces!) at work on a racing motorcycle than those I have mentioned (friction, torque, anti-squat, and more), but you should already have a great grasp of the basics needed for a high-speed corner now and perhaps greater respect for the riders and machines next time you watch a race.

There is one component that will make all of the difference between a good turn and a great one: Practice…

If a MotoGP rider at the pinnacle of his craft needs to practice constantly, there must be a good reason. Although we have discussed one major part of the turn, i.e., the counter-steer, there are several other variables, and some riders will use the rear brakes in a corner, where others might flick the clutch as they turn.

Late-braking is an art of its own and will help determine the path of a machine and rider into the corner, and these techniques can only come with experience and be improved by practice.

It should not happen as the handlebar is only briefly touched on the side towards which you wish to turn. (Left handlebar when wanting to take a left turn, etc.)

Technically correct, but if you ever plan to finish a race, you’d better get on board.

Nope – That will give you lean but very little turn, so expect a ride back to the paddock on that cute recovery scooter.

Counter-steering is vital to cornering at speed on a MotoGP bike, as explained.  Only kinks in the circuit can be negotiated by simply leaning slightly. The forces at work make it impossible to corner at a speed that is both safe and fast without using counter-steering properly, so MotoGP riders do counter-steer.

Louis Pretoriushttps://onestopracing.com
Previous article
Here’s Why Your Go Kart Dies When You Turn
Next article
Can You Drag Race With Wheel Spacers?