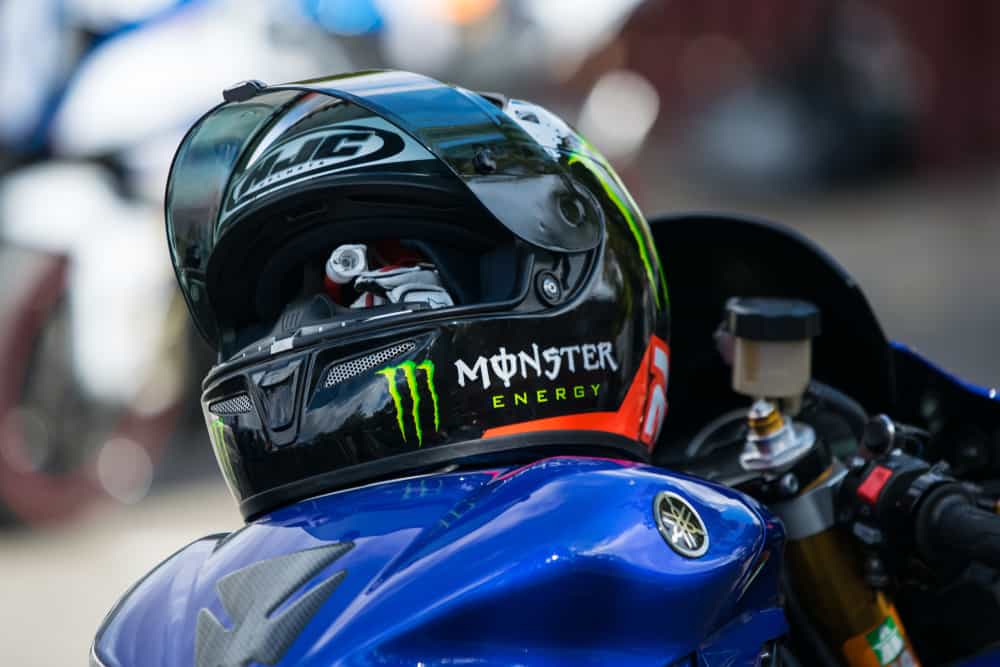 The fuel tank of a MotoGP racing machine is more than just a place to keep the 22 liters of fuel for a race. It is also a place to hold onto for the rider. The fuel tank is designed to fit the rider’s body and make the center of gravity of the bike as low as possible. The fuel tank provides the rider with a place to grip onto using his legs and knees.

The G-forces that the rider of a MotoGP motorbike experience during racing is extreme. A rider can experience as much as 1.8G when decelerating at the end of the straight. That is far less than the 5G that a Formula 1 racecar driver will experience. Still, the difference is that the MotoGP bike only has two wheels on the ground and almost no aerodynamics to help keep it on the road, whereas the F1 car has four wide tires and many aerodynamic wings to keep it on the road. Let’s look at how tank grips help the MotoGP rider to maintain control of his racing machine.

How Does A MotoGP Rider Stay On His Bike?

The F1 driver is strapped into the tight-fitting cockpit of his racecar, whereas the MotoGP rider has only a few places to hang onto his bike or risk flying off and out of a race.

There MotoGP rider holds onto the handlebars with his gloved hands. His booted feet are placed on the foot-pegs, from where they have to help push the rider into the bike. The rider’s backside is lightly placed on the seat while his knees grip the fuel tank, assisted by the tank grips.

Tank grips are flat rubber or plastic surfaces mounted on the sides of the fuel tank to provide friction between the rider’s knees and thighs on the fuel tank.

There are several techniques that MotoGP riders use to enhance their ability to control the speed and power of the motorbike when racing. During cornering, the rider hangs off the side of the bike,  pushing his knee into the side of the fuel tank. The rider twists his foot on the foot-peg forcing his knee into the tank while leaning off the bike on the other side. This technique gives the rider’s leg a firm grip on the bike through the corners.

The rider will lean off the bike towards the ground to keep the tires power-sliding around the corner when cornering. The rider used the inside thigh and knee of the opposite leg to grip onto the fuel tank.

The rider has to move around on the bike to optimize the weight and power distribution of the bike to achieve optimum speed. The rider will use the G-force on his body to assist him in making some of these movements. Trying to resist the G-forces will make getting into optimal position much harder.

Similar to deceleration, the bike can only accelerate at 1G due to the earth’s gravitational force. The rotational thrust of the rear wheel will try to force the front wheel to lift off the ground, resulting in a wheelie. The rider will lift his butt off the seat and stand on the foot-pegs while gripping the fuel tank with his knees when accelerating out of a corner, putting his weight forward on the bike to help keep the nose down.

To facilitate the grip onto the tank grips, the racing suits are fitted with linings on the inside of the legs, made of special silicone rubber,  making it easier for the rider’s body to cling to the fuel tank, thus also increase their ability to control the bike.

Are Motorcycle Tank Grips Worth Fitting?

Wearing protective gear is always recommended for motorbike riders, even for short trips. The knee pads and inner thigh areas are made of a material with a rough surface to facilitate grip to the fuel tank. The application of tank grips will further enhance the grip between the knees and tank when hard braking or acceleration by the rider.

Tank grips for street bikes are made of a transparent film, which will also protect the fuel tanks from getting scratched by the rider’s knees. Tank grips are inexpensive and are an easy add-on to any street bike.

What Are The Benefits Of Tank Grips On Your Motorcycle?

Tanks grips can be easily retrofitted to your motorcycle and offer some significant advantages for minimal cost. The tank grips will allow the rider a more secure grip on the bike and prevent the rider from slipping forward during hard braking.

The improved seating of the rider will also lessen the need to grip the handlebars too tightly. Many leisure rides experience pins & needles in their hands when doing longer distances. The cause of which may be due to gripping the handlebar grips too tightly.

The rider must be able to wriggle their fingers without disrupting their grip. It is also recommended to let go of the handlebars after coming to a stop at and stop signs of in traffic congestion. Shake your hands out, encourage more blood flow to your hands, and loosen up the tense muscles in your upper arms.

MotoGP riders do make use of tank grips, without which they would have far less control over their motorbike. Tank grips are also a helpful feature on street bikes and motocross bikes as they provide the ride with the ability better to grip the bike between their knees and thighs.

MotoGP Vs. Moto2: What’s The Difference?