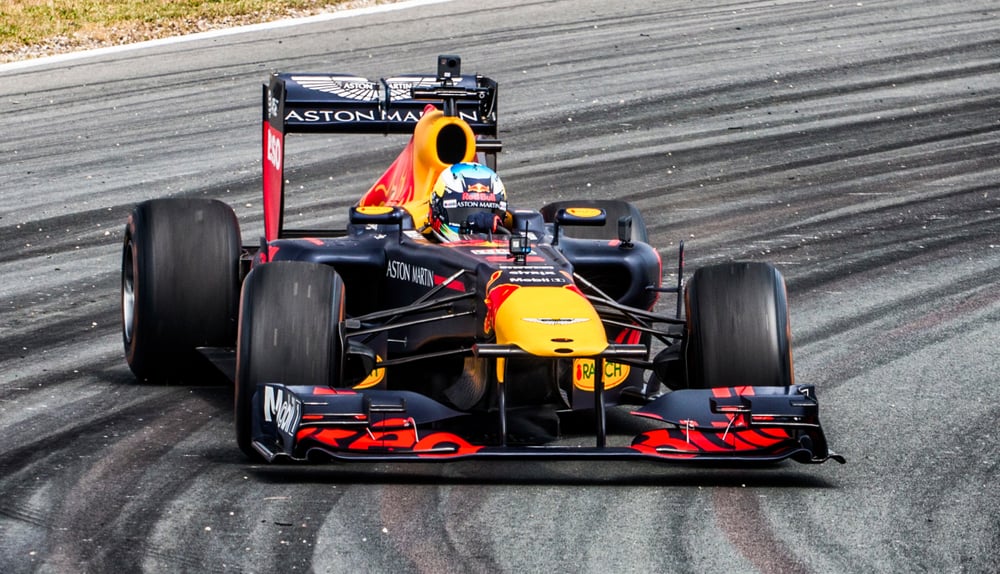 If you have ever watched Formula 1, you will have noticed that most of the teams on the grid are car brands, such as Ferrari, Mercedes, or McLaren. However, it is striking that there are not one but two teams belonging to the giant brand Red Bull. That makes me think, why does Red Bull have two F1 teams?

Red Bull has two F1 teams because it is a very active company in extreme sports, and it saw F1 as an opportunity to enhance its brand. As Red Bull has a lot of money, and the regulations allow it, they decided to have a senior team and a junior team, Red Bull and AlphaTauri.

Dietrich Mateschitz, the founder of Red Bull and passionate about racing, wanted to expand his empire with two Formula 1 teams and, together with Dr. Helmut Marko, consolidate a program for young drivers in the category that would not go unnoticed.

Red Bull was founded in 1987 by Austrian Dietrich Mateschitz. Since then, the company has grown exponentially, becoming the world’s largest energy drink brand, with more than 6 billion cans sold in 2017.

Since its inception, Red Bull has been a brand that has used very innovative marketing and advertising, aimed primarily at young people, with great slogans like “Red Bull Gives You Wings” and started advertising campaigns at sporting and entertainment events.

Mateschitz was keen to align Red Bull’s brand image with the superior physical and mental attributes found in extreme sports athletes from very early on. For this reason, in just a few years, Red Bull gained an important presence in many sports, especially extreme sports, such as BMX, skateboarding, cliff diving, air racing, and snowboarding.

Formula 1 was not going to be less. As it has one of the largest audiences around the world, Mateschitz saw the perfect opportunity to promote Red Bull in this sport and thus expand its brand in a new market with great possibilities.

Although Red Bull does not sell and promote cars like most F1 teams such as Alfa Romeo, Mercedes, Ferrari, McLaren, or Renault, the energy drink brand has an interest in the sport due to its philosophy since its inception and as it offers a great exhibition and exposure around the world.

The History Of Red Bull In F1

The energy drink brand entered Formula 1 long before founding its own team. Red Bull’s first involvement in F1 began in 1989 when it signed Gerhard Berger as its first motorsport athlete.

Years later, in 1995, Red Bull became a visible sponsor for the first time, sponsoring the Swiss team Sauber and acquiring a majority stake. The iconic Red Bull logo was stamped onto the Sauber cars, creating a livery very similar to the current energy drink team.

Red Bull sponsored Sauber until 2004, as Dietrich Mateschitz wanted more control over the team’s actions. One of the discrepancies with the Sauber team was promoting Kimi Raikkonen instead of Red Bull’s preferred candidate, Enrique Benoldi.

The perfect opportunity arose at the end of that year, as the Jaguar team was put up for sale for a dollar, so Mateschitz bought the team, inheriting the team’s infrastructure, material, and personnel and renaming it Red Bull.

Mateschitz hired his friend Helmut Marko as an adviser and Christian Horner as team manager and began pumping millions into the team, making its official debut in the 2005 season.

As if that were not enough, at the end of 2005, Red Bull also bought the Minardi team, debuting in 2006 with a second team, Toro Rosso, as a junior team dedicated to enabling young and talented drivers from the Red Bull Junior program to participate and grow in F1.

The philosophy of both teams was to seek out and develop young drivers in the lower categories, thanks to Helmut Marko, and offer the best a seat at Toro Rosso. Once established in the junior team, they could move up to Red Bull, where they would fight for higher places on the grid. Thus, both Red Bull and Toro Rosso became “headhunters.”

Red Bull did not stop growing in the coming years. In 2006 they took their first podium finish, and in 2008, surprisingly, Toro Rosso took a victory at the Monza GP, thanks to a young driver named Sebastian Vettel, who was promoted to Red Bull in 2009.

From then on, and with Vettel as its rock star, Red Bull became one of the best teams, dominating the grid between 2010 and 2013, in which they won all the drivers’ and constructors’ titles, while Toro Rosso established itself as a midfield team dedicated to young talent.

With the advent of the hybrid era in 2014 and the dominance of Mercedes, neither team has had much of a chance to win. However, Red Bull has remained competitive. For the first time, in 2021, it has finished ahead of the Silver Arrows, with Max Verstappen beating Lewis Hamilton to become world champion, 8 years after Vettel last did.

Has Red Bull’s Young Driver Program Been A Failure?

Since 2005, dozens of drivers have passed through Red Bull’s young driver program, praised and criticized in equal measure, but has it been a success or a failure?

The program has been highly criticized over the years due to the tremendous pressure put on young drivers, who on many occasions have been promoted too soon and who, not performing as expected in a relatively short period, have been replaced, creating greater long-term damage.

These have been the cases of drivers like Jaime Alguersuari, Alex Albon, or Pierre Gasly, who were promoted too soon to F1 or the Red Bull team and subsequently ruthlessly dismissed for not being prepared.

For this, the program has been criticized since it offers opportunities to drivers, but they take them out of the way as quickly as they did, harming their racing career. A symptom of the program’s failure is that in 2021 a driver who had not gone through the young driver program was signed by Red Bull for the first time since 2007: Sergio Pérez.

However, we must bear in mind that in Formula 1, there are only 20 seats, and thousands of drivers aspire to race in it, so the competition is very high, and only the most prepared are those who last many years in the category.

Red Bull has indeed treated some drivers unfairly, but it is undeniable that its ability to produce competent F1 drivers is unmatched compared to any other academy. They have allowed debuting in F1 to more than 15 young drivers in a decade and a half and have made two of them world champions: Sebastian Vettel and Max Verstappen.

Of the current grid, 8 drivers are or have been linked to Red Bull: Verstappen, Pérez, Ricciardo, Sainz, Gasly, Tsunoda, Albon and Vettel. This means almost half of the grid, which is a brutal figure, and some drivers like Ricciardo or Sainz are some of the best drivers in F1 today.

In addition, many former Toro Rosso drivers, such as Sébastien Bourdais, Jean-Éric, Sébastien Buemi, or Brendon Hartley, currently compete in other competitions so having passed through the Red Bull young drivers program gives you many guarantees of being a driver in F1 or other competition.

Therefore, despite its ruthless management style, Red Bull’s young driver program has been a complete success, as it is a machine for making quality drivers. However, as with everything, there are always things to improve.

As seen before, Toro Rosso made its debut in Formula 1 in 2006 after purchasing the Italian team Minardi as a platform for young drivers. The team was officially renamed Scuderia Toro Rosso, which means Red Bull team in English.

However, for the 2020 season, the team was rebranded as AlphaTauri, named after the constellation Alpha Taurus, known as the giant red star. This is because AlphaTauri has been Red Bull’s fashion company since 2016, and they have made this change to the junior team to promote the brand and give it more visibility.

Toro Rosso always had a very similar livery to Red Bull, so it was easily identifiable with energy drinks, and there were even those who confused both teams. However, the team has also changed its logo and livery with the new name change, although its philosophy remains the same.

Now, the AlphaTauri livery is very different from that of Red Bull, being navy blue and white, the official colors of the clothing brand, and now the logo also differs quite a bit. Hence, the new cars are very identifiable on the grid.

Many did not know that Red Bull had a clothing brand before the rebrand of Toro Rosso, so they have achieved just what they wanted, promoted it in the market, reached the target audience, and thus got more profit from their second team.

Is Formula 1 Worth It For Red Bull?

According to Athletic Interest, thanks to a 2018 Forbes report, Red Bull is technically losing a lot of money through Formula 1. In their first 14 years in the sport, they invested $2.3 billion in F1.

It is estimated that Red Bull contributes around 35% of the team’s revenue each year, which would be approximately $160 million, so due to the high costs of the sport, the team would only make $10 million in profit.

However, Red Bull’s objective with Formula 1 is not to generate profits but to boost the sales of its energy drink. Its exposure value between 2009 and 2014 was estimated at $320 million per year, making its return on exposure double Red Bull’s investment costs.

So, even though it doesn’t make any money directly from Formula 1, Red Bull benefits from the sport for its exposure and prestige, making it a marketing machine that has been very profitable in the long run, mainly thanks to the sporting successes that the team has had.

Does Red Bull Have An F1 Track?

In 2008, Red Bull bought the Circuit of Spielberg in Styria, Austria, and renamed it the Red Bull Ring, where Formula 1 races have been held continuously since 2014.

However, after a layout change was discussed and work began, the project was scrapped, and the circuit fell into disuse, with parts demolished and others in disrepair.

After some years of uncertainty, in 2008, Dietrich Mateschitz bought the circuit. He began its reconstruction and remodeling, and it was reopened in 2011 to host some sporting events such as the DTM or Formula 2.

As of 2014, it has hosted the Formula 1 Austrian GP and, as of 2016, the MotoGP uninterruptedly. In 2020 and 2021, it also hosted a second Grand Prix in each category, the Styrian GP, due to calendar changes caused by the Covid-19 pandemic.

The purchase and reconstruction of the A-1 Ring by Red Bull has been a complete success, as it has become an essential event in the Formula 1 calendar attended by thousands of fans from all over Europe, and where the Red Bull team It has been very successful, with 4 wins for Max Verstappen.

Red Bull has two Formula 1 teams since it is a sport that generates a lot of exposure and benefits and is a large company with a lot of money and regulations allowing it. It bought two teams, one dedicated to competing for victories and titles and another dedicated to training and consolidating young talents.

Since it arrived in 2005, Red Bull has had a significant influence in Formula 1 and has been one of the most successful teams, so Mateschitz’s investment has been a complete success.