Does The US Have A Formula 1 Team? 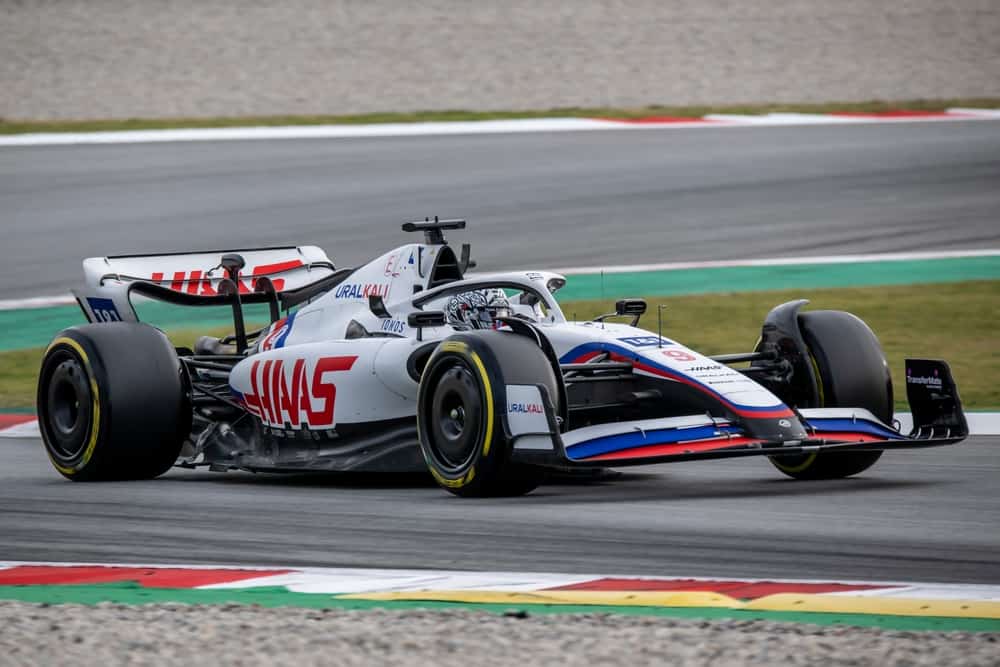 The USA is one of the fastest-growing Formula 1 markets. Thanks to increased exposure, primarily due to Netflix’s Drive To Survive series, viewership rates have skyrocketed in the USA. From the 2022 season, there will be two races in the States, with a third expected to be added in 2023. With this popularity, you might think that the US would be an excellent place to have an F1 team, and you might be asking, does the US have a Formula 1 team?

The US does have a Formula 1 team. Haas F1 Team are headquartered in Kannapolis, North Carolina. However, they do have a base in England for logistical reasons. From 2024 there may be two American F1 teams as Michael Andretti wants to enter a new team into the sport called Andretti Global.

Haas have a bit of a complicated arrangement regarding where they build their car and where their team personnel are located. However, they remain an American team at their core, and while they are currently the only US team on the grid, this might change in 2024 if Michael Andretti’s bid is successful.

Haas F1 Team are technically American. They are owned by American businessman Gene Haas, the founder and sole stakeholder of Haas Automation, a machine tool manufacturer.

Their main headquarters are in Kannapolis, North Carolina. However, things start to become a little blurry here. They also have a base in Banbury in England. This is because most Formula 1 races are either in Europe or in countries that are closer to Europe than they are to the United States. Therefore, it makes sense to have a more centrally located base so that staff are not forced to commute between the USA and Europe constantly.

Haas also have an office in Maranello, Italy, thanks to their close relationship with Ferrari. Ferrari supplies the engines to Haas (plus some other components). Furthermore, Haas uses Ferrari’s wind tunnel, so the two have always had a close relationship.

However, in 2022, they took further steps to bring the two teams closer, as Haas opened up another small office in Maranello, situated in a building owned by Ferrari. It is operated by Haas employees and existing Ferrari employees who were redeployed due to budget regulations. This is where Haas’s most recent F1 car, the VF-22, was designed. This is in line with FIA regulations, but some teams, such as McLaren, have recently expressed concern over Haas and Ferrari’s relationship.

Therefore, while Haas are an American team for all intents and purposes, they do not solely operate out of the USA, as they also have multiple European offices.

Will Andretti Join F1 In The Future?

Since the beginning of 2022, rumours have been circulating that former race car driver and owner of IndyCar team Andretti Autosport, Michael Andretti, is looking to enter a new team into F1. Andretti is also the son of former F1 World Champion Mario Andretti, so the world of Formula 1 is not new to him.

The plans would be for the team to join the sport for the start of the 2024 season. They would be called Andretti Global and would be the 11th team on the Formula 1 grid. This means they will not be replacing any of the existing teams but rather forming a completely new one to compete alongside the ten teams already in F1. Under the current regulations, there can be up to 26 drivers (13 teams) in Formula 1, so this would not pose any issues.

Who Would Build Andretti’s F1 Cars?

Currently, Renault is leading the way to be the new team’s engine supplier. This would make the most sense, as they are the only engine manufacturer in F1 who do not have any customer teams. Honda / Red Bull Powertrains have Red Bull Racing and AlphaTauri. Mercedes have Williams, Aston Martin and McLaren and Ferrari supplies engines to Alfa Romeo and Haas.

According to Andretti, the car would have to be built by different companies in the initial years. Haas currently do something similar, with their chassis being built by Dellara and several of their other parts being supplied by Ferrari.

However, Andretti eventually wants his team to build their own cars, and he wants them to do so in the USA. The idea is to make them in a state-of-the-art factory in Indianapolis near Andretti’s IndyCar team headquarters.

What Is The State Of Andretti’s F1 Bid?

According to Andretti, he has enough backing to start an F1 team, and all he is awaiting is approval from the FIA. The idea is that the team would run at least one American driver to make the team genuinely American and attract more local sponsors.

At the time of writing, Andretti seems 100% committed to the project, and it should not be long until we hear official confirmation from the FIA regarding Andretti’s proposal.

Are There Any American F1 Drivers?

Right now, there are no American drivers on the Formula 1 grid. The last American driver to compete in an F1 race was Alexander Rossi, who raced in a few races for Manor in 2014 and 2015. He never properly established himself in Formula 1, so he continued his racing career back home in the States, where he raced in IndyCar. He tasted much more success there, establishing himself as one of the series’ best drivers, finishing the 2018 season in second.

The F1 World Championship has only been won by one driver born in the USA. This was all the way back in 1961 when Phil Hill won World Championship driving for Ferrari. Mario Andretti is the last American driver to win an F1 race, winning his final race at the 1978 Dutch Grand Prix. While technically an American driver, Andretti was born in Italy and spent a large portion of his childhood there.

However, with Michael Andretti’s bid to enter his team into F1, it seems like it likely won’t be long until we see an American driver back in the pinnacle of motorsport. The driver rumoured to be leading the race to drive for Andretti Global is 21-year-old Colton Herta, son of Bryan Herta. Colton Herta drives for Andretti Autosport in IndyCar, so he has existing links with the Andretti family. Therefore, it would make sense for the young Californian driver to be the next American star in Formula 1.

Haas F1 team are American and are owned by American businessman Gene Haas. While they have offices in Europe, their main base is situated in the USA. From 2024, they might no longer be the only US F1 team on the grid, as Michael Andretti is wanting to join the sport and appears to be close to having a bid accepted by the FIA.

Louis Pretoriushttps://onestopracing.com
Previous article
Do F1 And F2 Race Together?
Next article
Does F1 Race In Las Vegas?