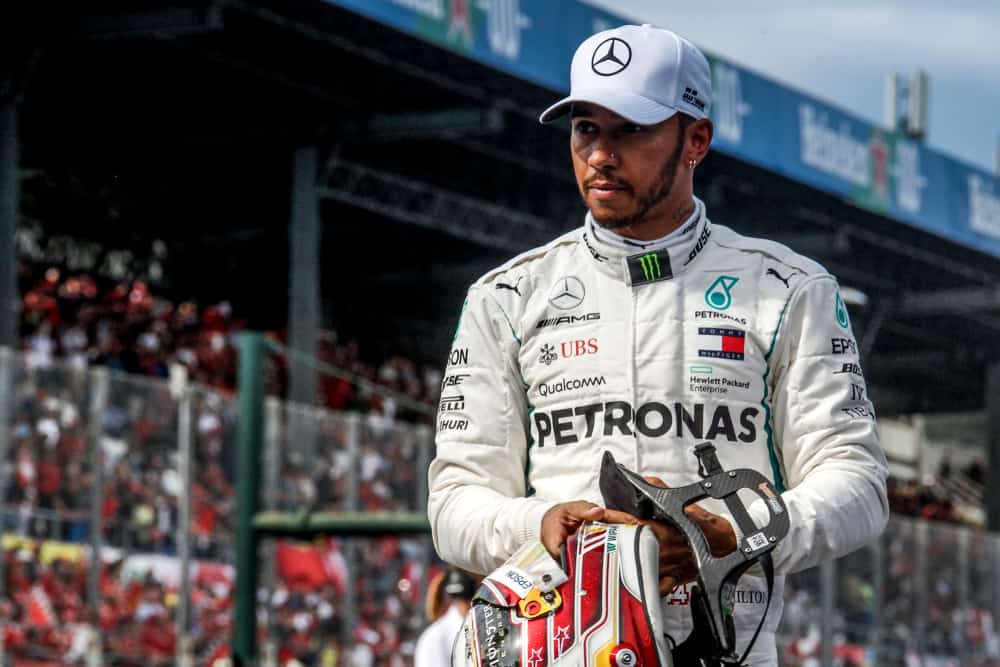 Lewis Hamilton is one of, if not the most, successful driver in Formula 1 history. This driver holds more records than any other driver in Formula 1 and is on his way to breaking several more. This leaves many with the question, what records F1 records are left for Hamilton to break?

There are several records available for Lewis Hamilton to break, including most F1 world championships, won, most F1 races started, most F1 wins at the same Grand Prix, and most grand-slam wins. Hamilton is likely to break several more records before the end of his career in F1.

With so many records to his name, which records are left that Hamilton can conceivably break?

Here is a breakdown of the remaining Formula 1 records that are possible for Lewis Hamilton to break in his F1 racing career.

This is the most significant Formula 1 record that Hamilton is likely to break. Lewis Hamilton is currently tied with Michael Schumacher for the most Formula 1 World Championship titles.

Both drivers currently hold 7 World Championships, but Hamilton is likely to take his 8th World title in 2021.

So far in F1, Lewis Hamilton has started 282 Formula 1 races, while the current record for most F1 race stars is held by Kimi Raikkonen at 341 race starts so far.

Hamilton still has a while to go to beat this record, but he is likely to beat it as he still has many racing years left in his career.

3. Most Race Wins At The Same Grand Prix

Lewis Hamilton is tied with Michael Schumacher for another F1 record – the most race wins at the same Grand Prix.

Hamilton has won the British and Hungarian Grand Prix races 8 times each, which ties with Schumacher’s 8 wins at the French Grand Prix.

One more win for Hamilton at either the British or the Hungarian Grand Prix will ensure that Hamilton will hold this record alone, another record that is unlikely to be broken any time soon.

4. Most Consecutive Race Wins In The Same Grand Prix

Hamilton holds 5 consecutive race wins at the Spanish Grand Prix. This means that he shares this F1 record with Ayrton Senna, who won the Monaco GP 5 times consecutively.

A win for Hamilton at the Spanish Grand Prix in 2022 will ensure that he breaks this record and will make him the F1 driver to have won the most consecutive races at one Grand Prix Circuit.

5. Most Consecutive Season With At Least One Grand Prix Win

There seems to be a trend with Lewis Hamilton and Michael Schumacher regarding Formula 1 racing records. This is no surprise, as these two drivers are some of the best of all time in the sport.

Both Hamilton and Schumacher share this racing record, and they have both won at least one Grand Prix Championship race in 15 consecutive F1 seasons.

If Lewis Hamilton wins a Grand Prix in 2022, which is highly likely, he will become the driver to hold the record of the most consecutive seasons in F1 with at least one race win.

6. The Highest Number Of Podium Finishes In A Single F1 Season

This is a record that is tied between three Formula 1 drivers. Hamilton, Vettel, and Schumacher have all won 17 races in a single Formula 1 season.

This is a record that may be broken by either Hamilton or Vettel, as they are both current Formula 1 drivers, but it is more likely that Hamilton will break this record based on current racing performance.

However, this record will be a challenge for even Hamilton to break, as the current lineup of drivers in F1 are all incredibly talented.

7. The Most Hat-Trick Wins

A hat-trick in Formula 1 is achieved by a driver when he wins pole position, takes the fastest lap time, and wins overall in a single race.

Lewis Hamilton currently has 18 hat-trick wins, while Michael Schumacher has a total of 22 hat-trick wins to his name, which is the record number to beat.

8. The Most Seasons Competed In

Hamilton has competed in a total of 15 Formula 1 racing seasons. This is yet a few seasons behind the current record holders Schumacher, Barrichello, and Raikkonen, who have all competed in 19 racing seasons in F1.

Competing in only four more seasons after 2021 will have Hamilton match this record, and racing in the 2023 season will allow Hamilton sole ownership of this record – that is, until a younger driver takes it from him in years to come.

9. The Most Grand-Slam Victories In Formula 1

A Grand-Slam in F1 is when a driver wins pole position, leads every lap in the race, sets the fastest lap time, and wins the race.

Lewis Hamilton has won a total of six Grand-Slam victories in his F1 career, which is two less than the eight Grand-Slams won by Jim Clark.

This Grand-Slam is the most difficult win to achieve in Formula 1, but Hamilton seems to be the next driver to hold this record, even if it does take him a while to achieve it.

Lewis Hamilton is among the most successful drivers in Formula 1 history. Many believe him to be the greatest driver of all time in F1.

Hamilton holds many records in Formula 1, and he is set to win even more.

This is not the definitive list of records that Hamilton has left to break, but these are some of the most significant.

One thing is a definite, Hamilton is a name that has marked the sport of Formula 1 forever, and there are few drivers who will ever make as much of an impact on motorsport as he has.