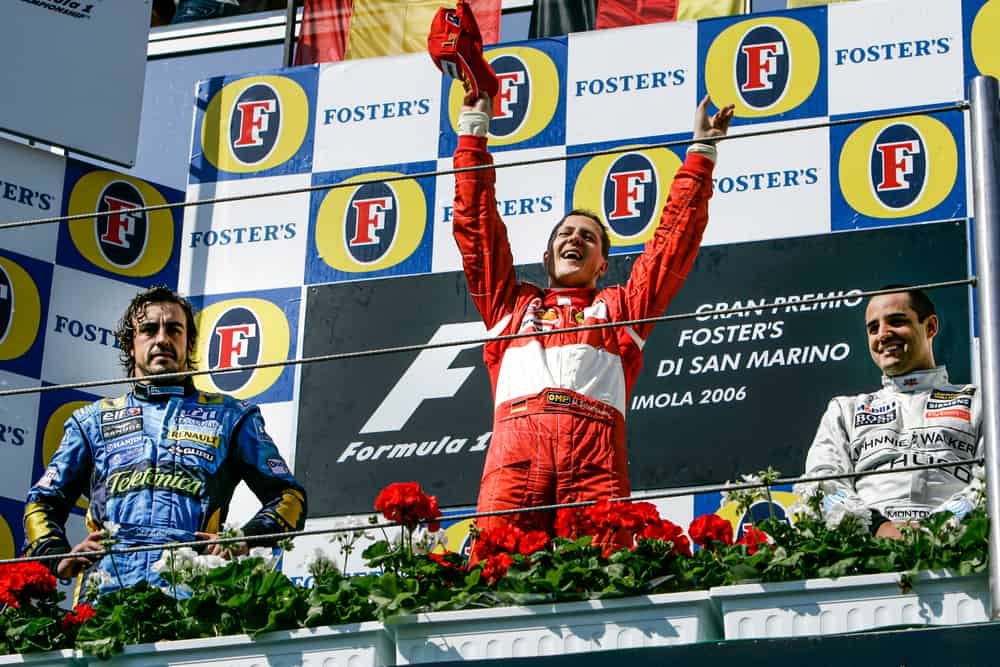 Since the first Formula 1 championship in 1950, 771 drivers of 41 different nationalities have raced at least one Grand Prix. Some have had a discreet passage through the category, while others have gone down in the history books, establishing themselves as true legends.

However, two drivers have stood out above all others: Michael Schumacher and Lewis Hamilton. The German and the Englishman are the drivers with the most world titles, seven each, thus establishing a figure tough to beat for future generations and marking a before and after in the category.

Hamilton or Schumacher? The numbers lean towards the Briton, while the more passionate fans will always stick with the Kaiser. It is highly unlikely that we will ever get a definitive, logical, and fair answer. Their records have gone down in the history books, and there are many parallels between their racing careers, so let’s take a closer look.

Hamilton vs. Schumacher: Their Impact On Formula 1

Before Schumacher and Hamilton became seven-time world champions, the landscape in F1 was very different. Schumacher made his F1 debut in 1991, while Hamilton made his debut in 2007. In 1993, i.e., before either had won any titles, the driver with the most championships was Juan Manuel Fangio, with five world titles, followed by Alain Prost with four, and then by Jack Brabham, Jackie Stewart, Niki Lauda, Nelson Piquet and Ayrton Senna with three each.

In just a few decades, the Kaiser and Hamilton have smashed all the records these drivers held, setting previously unthinkable figures. With 91 and 103 victories, respectively, between them, they have won almost 18% of all the races that F1 has ever held. Far behind are Alain Prost’s 51 victories and Ayrton Senna’s 41, which seemed impossible for anyone at the time.

One with Ferrari and the other with Mercedes dominated the grid for years, establishing themselves as the best drivers in the history of Formula 1.

Michael Schumacher: The Rise of the Kaiser

Michael Schumacher made his Formula 1 debut in 1991 with Jordan, replacing Bertrand Gachot for the Belgian GP. After an outstanding performance, the Benetton team, led by Flavio Briatore, already hired him for the next race. Benetton was a relatively new and strong midfield team with a great future projection, so it was the perfect team for a rookie.

In 1992, Schumacher scored his first podiums and first victory, finishing third in the championship and demonstrating great potential. His best years with the Italian team were 1994 and 1995, when the German-dominated the grid, winning his first two world championships in a row.

Despite his success, the Kaiser signed for the legendary Scuderia Ferrari team for 1996, which had not won a constructors’ title since 1983 and a drivers’ title since 1979. Hence, the team faced a difficult reconstruction project. For 4 seasons, the German fought for the championship against Damon Hill, Jacques Villeneuve, and Mika Hakkinen, but without success.

However, from 2000 to 2004, both Schumacher and Ferrari dominated the grid, marking the most glorious period of the Prancing Horse and one of the most dominant stages in the history of F1, breaking all records and becoming the best driver in history with 7 world titles.

Between 2010 and 2012, Schumacher drove for Mercedes before finally quitting racing. Due to a skiing accident in 2013, his state of health is very delicate. Since then, his actual condition has been unknown. His son Mick made his F1 debut in 2021 with the Haas team.

Hamilton joined the McLaren Academy as a child. After dominating the lower categories, the Briton made the jump to F1 in 2007 with the Woking-based team, teaming up with none other than the defending champion of the last two world championships, Fernando Alonso.

Despite the pressure and his youth, Hamilton demonstrated his incredible talent. In his rookie year, he obtained 4 wins and numerous podiums, finishing one point behind the winner, Kimi Raikkonen, and tied on points with Alonso.

In 2008, with Alonso already out of the team, Hamilton won his first world championship, becoming, at 23 years and 9 months, the youngest winner up to that time. After 4 seasons with McLaren in which neither he nor his teammate Jenson Button achieved the world championship, the Englishman signed for Mercedes for 2013, a manufacturer that returned to F1 in 2010, a move seen as risky for many.

However, with the arrival of the hybrid era in 2014, the Silver Arrows dominated every championship from that season until 2020. Hamilton won six titles in those years, only being beaten by his teammate Nico Rosberg in 2016. Hamilton has smashed all kinds of records and has become the best driver statistically in F1 history.

In 2021 he fought to the end for the championship with Max Verstappen, although he lost it on the last lap of the last race. The Englishman has not had a good start to the season in 2022 but will continue to fight for the coveted eighth title.

Michael Schumacher, between the 90s and the 2000s, managed to reach the figure of 7 world championships and broke record after record, setting figures that seemed impossible for anyone, becoming the best of all time. The German, in a total of 308 GPs, achieved 91 victories, 155 podiums, 68 pole positions, 77 fastest laps, and 1,566 points. This means that he achieved 29.5% of the victories, 50.3% of the podiums, 22% of the pole positions, and 25% of the fastest laps in the races in which he participated.

Schumacher’s figures are pretty impressive. However, with the domination of Hamilton and the Silver Arrows, the Englishman has beaten many of the Kaiser’s records, becoming the most effective driver. In 296 GPs, Hamilton scored 103 wins, 183 podiums, 103 pole positions, 58 fastest laps, and 4,215.5 points. This means that he has won 34.8% of the races in which he has raced and has achieved 61.8% of podiums, 34.79% of pole positions, and 19.59% of fastest laps.

Although Hamilton has become the best driver statistically in history, some of Schumacher’s records are still unbeatable. It should also be noted that there are now more races per season and that the points system has changed significantly.

In addition, both won their last 4 championships in their 11th, 12th, 13th, and 14th season in Formula 1. More interestingly, both won championships with independent teams first (Schumacher with Benetton and Hamilton with McLaren) before starting a project to rebuild a large manufacturing team, being critical pieces for their success.

Both have driven some of the most dominant cars in history, but they weren’t at the top when they joined the project. Ferrari had only won two races in the previous three seasons when Schumacher joined, while Mercedes had only won one the season before Hamilton signed with them. In his championship years, Schumacher achieved 5 Grand Chelem (pole, win, fastest lap and lead all laps), while Hamilton achieved 6.

Hamilton vs. Schumacher: Strengths and Weaknesses

At the time, Schumacher was considered the most complete driver on the grid. He was fast in qualifying and unstoppable in the race and shone with impressive consistency. His teammates rarely beat him. He also stood out for his ruthless overtaking maneuvers and his great discipline, passion, and ambition.

Schumacher never gave up and would not give up a position until the last consequences. This led him to take questionable actions in tense moments, such as in the season finale at the 1997 European GP when he left out his rival Jacques Villeneuve and was subsequently disqualified.

On the other hand, Hamilton’s consistency is on another level. The Englishman has won in every season since his debut (it remains to be seen if he gets any in 2022), including with some not-so-good McLaren and Mercedes. The Englishman is relentless on a single lap and is the best qualifier of all time. He has shared the grid and beaten great champions like Michael, Raikkonen, Button, Alonso, Rosberg, and Vettel.

Hamilton is an inseparable part of Mercedes, and another of his great qualities is knowing how to choose a team. However, the Englishman has been accused of being too aggressive, especially during his early years. He has had frictions and tensions with his teammates, such as Alonso and Rosberg. His aggressive driving has been a serious problem for tire management.

Hamilton vs. Schumacher: Image and Influence

Michael Schumacher took professionalism to the next level with dedication and devotion to his activity, which opened a new era among Formula 1 drivers. He has significantly influenced the training, diet, and “perfection” to which drivers aspire today, with great dedication to his work and a great discipline to achieve his goals. Schumacher represents the excellence of elite sport, applicable to all aspects of life.

Both Schumacher and Hamilton represent the image of leadership, playing a crucial role in their teams’ success and motivating those around them even in the most challenging times. Off the track, however, the two drivers are very different.

Schumacher was a very private person when he wasn’t in the busy world of F1, spending time with his family and pursuing the sports and activities he loved. Hamilton is quite the opposite. His active social media presence and vindicating role in many social movements have extended his influence beyond F1.

The Englishman has been one of the most active voices of the Black Lives Matter movement and has also used his position to raise awareness for LGTBI+ rights and the environment. His actions have earned him praise and criticism, but the same thing happened with Schumacher in his time. The greatest in history always generate polarization, and that is an indication of their success.

Michael Schumacher and Lewis Hamilton are the greatest drivers in the history of Formula 1. Their numbers, image, and influence on and off the track confirm it, and they are athletes who have transcended beyond Formula 1, being known by anyone anywhere in the world.

It is unlikely that we will ever get a definitive, logical, and fair answer as to who is the best, as both have been the best of their generation and have faced very different adversities. As we have done today, we can only analyze them and draw our own conclusions. Be that as it may, the position and impact of each of them are undeniable. And you, whom would you pick?