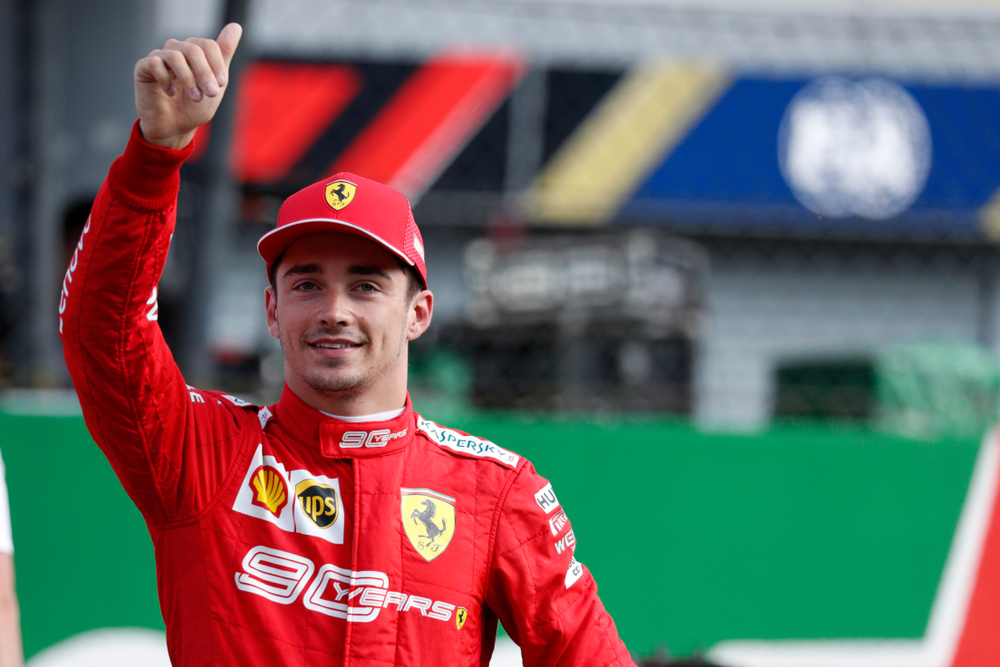 As in other sports, Formula 1 drivers come and go. Old generations are replaced by new ones. Legends give way to future world champions, who already show their enormous talent in the lower categories.

Charles Leclerc and Max Verstappen are the leaders of a very promising new generation of F1 drivers. The Monegasque leads the Ferrari project and is looking to win his first title, while the Dutchman already won the world championship in 2021 against Lewis Hamilton and is looking for more.

This new generation of F1 drivers has other very talented drivers such as Lando Norris, Pierre Gasly, Alex Albon, Yuki Tsunoda, and George Russell. They have been racing against each other since they were kids and promise to offer a great show. After his first title in 2021, Verstappen faces this season Leclerc, who will not make things easy for him.

Leclerc vs. Verstappen: A Rivalry Since Go-karting

The story of Max Verstappen and Charles Leclerc is very similar and, at the same time, very different. Verstappen was born on September 30, 1997, and Leclerc just 16 days later. Both of their families have a long association with motorsport.

Max’s father, Jos, was a Formula 1 driver between 1994 and 2003, and his mother, Sophie Kumpen, competed in karting in Belgium. Charles’ father, Hervé, raced in Formula 3 during the 1980s and 1990s. From a very young age, Charles maintained a close relationship with later F1 driver Jules Bianchi, his godfather.

Both Max and Charles started karting very early, at just 5 years old. By 2009, when they were 11 years old, Verstappen had participated in 11 events, of which he won 7, while Leclerc participated in 4 championships with a second-place as his best result. In 2010, they faced off head to head for the first time in the Lonato Winter Cup in the KF3 class.

108 young drivers participated in that competition, including other current F1 drivers such as Pierre Gasly, Esteban Ocon, and Alex Albon. Max was runner-up, while Charles came in twenty-first. Up to 2013, the two drivers had raced against each other 33 times, 24 of which Verstappen finished ahead of Leclerc.

Both did very well in karting, although Verstappen stood out more, as he practically won all the championships. In 2014, they both made the jump to car racing. Max raced in Euro Formula 3 and came third, while Leclerc went to the lesser-known Formula Renault 2.0 Series, finishing runner-up.

Due to his dominating passage through all the lower categories, Red Bull brought Verstappen into its young driver program in 2014 and offered him a seat at Toro Rosso for 2015, when he was only 17 years old and had barely completed one season in real car racing. On the other hand, Leclerc moved up in 2015 to European F3 and in 2017 to F2, winning it and making his F1 debut in 2018 with Alfa Romeo.

At 17 years and 166 days, in 2015, Verstappen became the youngest driver to debut in Formula 1 due to his meteoric career in the lower categories. In Formula 1, unlike many promising young drivers, he did not disappoint. In 2015 he did very well with Toro Rosso, scoring more than twice as many points as his teammate and fellow rookie Carlos Sainz.

Due to his great performance and, at the same time, the poor performance of Daniil Kvyat at Red Bull, Verstappen was promoted to the first team at the 2016 Spanish GP. To everyone’s surprise, the Dutchman won that race, demonstrating his enormous talent.

He had the experienced Daniel Ricciardo as a teammate until 2018, beating him in that last season. Until 2020, no team could match Mercedes, with Red Bull being the second or third best team, so Max accumulated a large number of podiums and some victories during those years while consolidating himself as one of the best drivers on the grid, characterized by his aggressive driving and ruthless overtaking.

In 2021, however, Red Bull built a car on par with Mercedes. Verstappen fought intensely against 7-time world champion Lewis Hamilton throughout the season, with some controversial moments and accidents on the track. After a historic season finale, the Dutchman beat Hamilton, winning his first title. Now in 2022, Verstappen is looking for his second title. With 67 podiums, he has surpassed Sebastian Vettel by 2, becoming the driver with the most podiums in Red Bull history.

After 2 years as part of the Ferrari Academy, Leclerc made the jump to Formula at 20 years in 2018 with the Alfa Romeo Sauber team, which was in a restructuring phase after the purchase of the Italian manufacturer. With a car that was barely fighting for points, Leclerc did quite well, scoring regularly and beating his more experienced teammate Marcus Ericsson.

His great season with Alfa Romeo earned him the Ferrari seat for 2019, pairing him with the 4 times world champion Sebastian Vettel, who was, in principle, the team leader. Leclerc did not make things easy for the German and ended up beating him in the championship, taking 2 wins, 8 podiums, and most surprisingly, 7 pole positions.

In 2020, Ferrari did not have a competitive car. However, the Monegasque still managed to get two podiums and once again outperformed Vettel by a large margin, forcing his departure from the team. 2021 was not a great year either for Ferrari or for Leclerc, as he was beaten by his new teammate Carlos Sainz, although it is true that the Monegasque had more reliability problems.

In 2022, however, Leclerc has reasserted himself as the team leader, taking 2 wins early in the season and consolidating himself as a title contender, far ahead of Carlos Sainz, although anything could happen until the end of the season.

Max Verstappen is only 24 years old, but having made his debut at 17, he has been racing in Formula 1 for eight seasons, and with 150 entries, he is one of the most experienced drivers on the grid today despite his youth. Considering his age, Verstappen has impressive statistics.

The Dutchman scored 26 wins, 67 podiums, 15 pole positions, 18 fastest laps, and 1732.5 points. This means that he has won 17.33% of the races in which he has raced and has achieved 44.67% of podiums, 10% of pole positions, and 12% of fastest laps. With these figures, it is very likely that if Verstappen continues for many years in F1 and with competitive cars, he will become the statistically best driver in history, thus surpassing Lewis Hamilton.

Leclerc vs. Verstappen: The 2022 F1 Championship

The 2022 season has brought great aerodynamic evolutions, notably changing the look of the cars and bringing back the “ground effect,” so famous and controversial during the 70s and 80s. In 2021, Mercedes and Red Bull had the fastest cars, but things have changed, and Ferrari and Red Bull best interpreted the new regulations.

With 9 Grands Prix completed, Max Verstappen leads the championship with 175 points, followed by his teammate Sergio Perez with 129 and Charles Leclerc with 126. Behind Leclerc is George Russell with 111 points and Carlos Sainz with 102. The Monegasque started leading the world championship after 2 wins and second place in the first three races, which looked like a championship for Ferrari.

Verstappen, instead, had to retire in 2 of the first 3 races due to reliability problems, giving Leclerc a long margin in the championship. However, since the Emilia Romagna GP, the Dutchman has completely dominated the grid, winning 5 of the 6 races and taking third place.

Leclerc, on the other hand, has only scored one podium since then and has had to retire in 2 races due to reliability problems, thus dropping to third in the championship. So far, both drivers have had some epic battles on track, as in the Saudi Arabian GP, and the world championship is more alive than ever. Reliability will play a very important role throughout the championship.

Leclerc vs. Verstappen: Strengths and Weaknesses

Charles Leclerc and Max Verstappen are two of the best drivers on the current grid, yet on the track, they are totally different, each with their virtues and flaws.

Max is probably the greatest talent Formula 1 has had in years because of the natural ability since he was a child in karting. He has excellent inner determination and grit, is ruthless at overtaking and defending, and has great intelligence on track. His race pace also makes him unstoppable on Sundays.

However, Max is very aggressive at times. Although he has moderated over time, this has cost him some serious accidents in the past.

On the other hand, Leclerc is a very classy driver, both on and off the track. His driving is very clean and smooth, and he rarely comes into contact with his rivals. He is very good at taking care of the tires, and his great virtue is qualifying. Charles is probably the best qualifier on the grid, and his many pole positions prove it.

He sometimes makes mistakes when under a lot of pressure or in certain circumstances, although this is a one-off occurrence. His weak point is perhaps the bad luck accompanying him, especially during his home Grand Prix in Monaco.

Leclerc vs. Verstappen: Their Impact On F1

Charles Leclerc and Max Verstappen are the leaders of a new generation of Formula 1 drivers taking over from great legends such as Fernando Alonso, Lewis Hamilton, and Kimi Räikkönen.

Great and promising drivers such as Lando Norris, Pierre Gasly, Esteban Ocon, and Yuki Tsunoda are also part of this generation. However, the Dutchman and the Monegasque are the most successful, being part of the two strongest teams on the grid. They will be the main influence and image to follow for today’s children.

Verstappen already made his mark in F1 by being the youngest driver in history to make his debut and win a race, setting previously unthinkable achievements for someone so young.

On the other hand, Leclerc has taken over the legacy of the late Jules Bianchi, and it is on his shoulders to make Ferrari great again.

Leclerc vs. Verstappen: Lifestyle and Relationship

Off the track, both Leclerc and Verstappen lead a similar life. They live with their girlfriends, Charlotte Siné and Kelly Piquet, in Monaco, where they lead a quiet life, train hard and go out with friends and family.

The two often do water sports on the French Riviera, such as driving jet skis to relax and have fun. As for other sports, Verstappen is more into cycling, while Leclerc likes paddle tennis.

Both are active on social networks and often upload photos with their friends and girlfriends wherever they go, and always have time to take pictures with fans or do autographs. Although they are rivals on the track off the track, they get along quite well and often joke with each other at press conferences.

The arrival of Max Verstappen and Charles Leclerc in Formula 1 has marked the beginning of a generational change in the category, where they are showing their talent and potential every weekend.

Both are in position for wins, podiums, and championships, so only time will tell if they will become two of the best drivers in history.