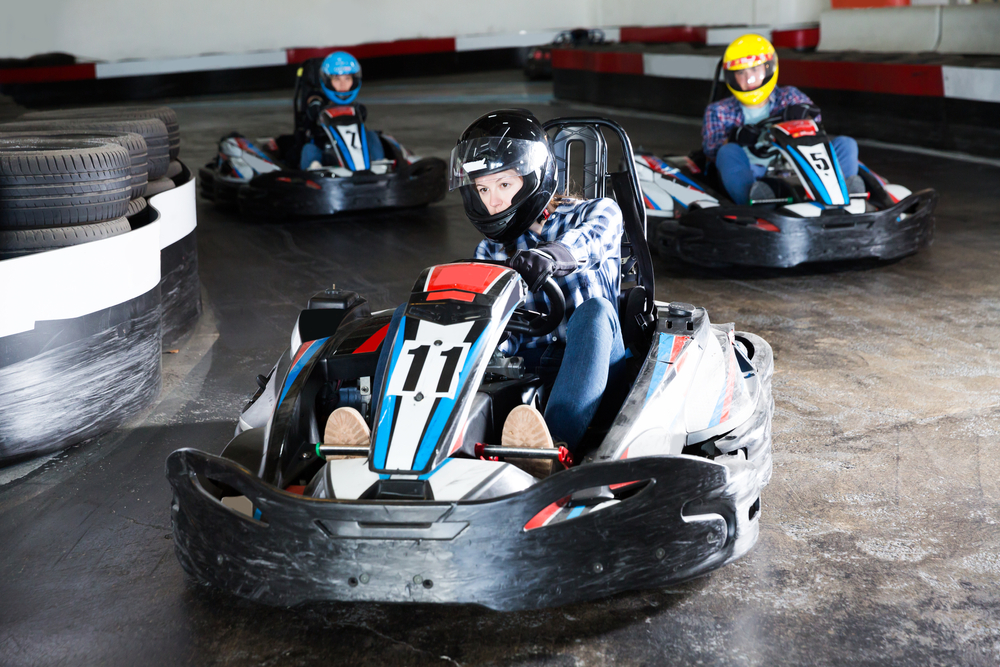 While karting and F1 are both motorsports, the former is an entry-level into motorsports while the latter is considered the pinnacle of motorsports. Thus while go-karting is a mostly leisurely activity with a competitive scene, Formula One is reserved for the best drivers in the world!

We will explore each sport’s mechanics, driving experiences, competitions, and cost to better understand the difference between go-karting and Formula One. Whereafter we will see the impact go-karting has on past and present Formula One drivers!

What Is The Difference Between A Go-Kart And An F1 Car?

Although some people mistake go-karts as simply being small Formula One cars and visa-versa, there are considerable differences between go-karts and Formula One vehicles.

The Mechanics Of A Go Kart

Although it’s an oversimplification to call a go-kart a “lawnmower with a steering wheel,” as some online commentators have expressed, they are extremely basic vehicles designed for casual driving or competitive driving among younger drivers.

While different go-karts have different specs and build, they typically consist of the following:

Overall, professional go-karts weigh between 75kg and 79kg without the driver and can reach top speeds upward of 160km an hour (depending on the competition and regulations.)

In conclusion, go-karts are versatile cars that can be fine-tuned into advanced vehicles that can efficiently and effectively handle various tracks and track conditions in the right hands!

The Mechanics Of An F1

Unlike the simplicity of go-karts, Formula One cars are some of the world’s most advanced and technical vehicles.

Furthermore, because they are designed for a singular purpose and a single competition (see below for further details), Formula One cars lack the diversity of go-karts as the FIA heavily regulates them.

Consequently, Formula One teams need to develop their chassis and/or power units subject to strict regulations:

In conclusion, although Formula One vehicles are highly technical, there is limited creativity and customization compared to go-karts.

However, the singular purpose of a Formula One car, the business of Formula One, and the skills needed to drive them to make this focused engineering some of the most advanced in the world!

How Do Go-Kart Competitions Work vs F1?

While most people may associate go-karting with a leisurely activity, numerous professional go-karting tournaments globally are an entry point into professional motorsport!

Furthermore, there are various types of racing categories, leagues, divisions, and race formats like:

No “definitive” tournament, title, or championship denotes the “world champion go-kart racer” in any given year/season.

Unlike go-karting, which has multiple competitions run by various organizations, all of which have different rules and regulations, Formula One is centered around a single racing season known as the FIA Formula One World Championship.

As the name implies, the Formula One World Championship is a singular competition hosted by the FIA and subject to their rules and regulations.

As of the 2022 season, the Formula One World Championship consists of 22 races held across 20 different countries from 20 March 2022 to 20 November 2022. The competition consists of ten different constructors, fielding two drivers per team.

Further to the above, the FIA Formula One World Championship includes a title championship for both constructors and drivers. It measures the success of individual drivers and team strategies/outcomes subject to a points system.

In conclusion, what Formula One lacks in diversity, it more than makes up for through its showcase as one of the world’s biggest, most popular, and widespread sporting events. Whereafter, an object “world championship title” is awarded to the winning team and driver respectfully.

What Is the Difference Between Driving A Go-Kart And An F1 Car?

While most go-karts are designed to be simple vehicles that are easy to drive, more advanced go-karts and competitions require a lot of skill to handle proficiently. Characteristics that make excellent go-kart drivers include aggressive driving, braking, and steering.

However, despite the g-force and speed of professional go-karts, most competitions/tracks feature simple karts designed for young children.

Driving a Formula One car is a physical, technical, and mental challenge reserved for drivers with years of driving experience, coupled with intensive training and guidance.

The first requirement for driving a Formula One car is that drivers need to be in peak physical fitness. A driver is expected to exhibit holistic cardio-vascular health and an impressive power-to-weight ratio.

Consequently, drivers have to reach a delicate balance whereby they are light enough to not be a burden on the car’s total weight while also having defined muscle mass.

The main reason drivers need to have high power-to-weight ratios is the amount of G-forces a driver will experience during a driving session. G-forces are the number of external forces a driver’s body will be exposed to during a race, particularly when cornering and braking at high speeds.

The technical challenge of driving a Formula One vehicle includes tire management and maintaining high RPMs to keep the car running efficiently during a race. These technical challenges extend to team dynamics and communication, whereas go-karting is mostly an individual sport.

How Much Does Go-Karting Cost vs F1?

Because of the accessible nature of go-karting and the complexity of Formula One, it’s not surprising to find out that there is a vast cost difference between the two sports. Let’s explore this cost division in greater detail below:

The Costs Of Go-Karting

Enjoying go-karting as a leisurely activity is a relatively inexpensive day out for friends and family; however, more serious go-kart drivers can expect to pay upwards of $11 000 for their kart, equipment, and tools.

Although $11 000 is a relatively inexpensive cost for motorsport, further racing time can result in additional expenses such as fuel, travel, tires, maintenance, updating licenses, and competition fees.

Thus while go-karting is an entry point for drivers looking to become professional, it is a financial sacrifice that typically requires sponsorship in light of minimal salary/compensation for drivers and teams.

The Costs Of F1

In contrast, Formula One is a highly elite and expensive sport reserved for drivers/teams who can afford the enormous financial sacrifices.

Along with labor costs, marketing, advertising, competition fees, penalties, ongoing maintenance, logistics, and drivers’ salaries (all of which can run into millions of dollars), most constructors spend between $150 million and $400 million on research and development alone!

Meanwhile, the cost of a Formula One car is over $20 million, which can be broken down as follows:

Why Do So Many F1 Drivers Begin Their Careers Go-Karting?

Because Formula One only takes the best and most experienced professional drivers, many develop their skills and acquire exposure through their performances across Formula 4, Formula 3, and Formula 2.

Consequently, go-karting is a common starting point for many young drivers looking to develop their race skills and attract the attention of investors/constructors.

At the time of writing, not a single driver on the 2022 Formula One grid didn’t begin their racing career in go-karting! Other Formula One drivers that started their careers in go-karting include, but are not limited to:

In conclusion, despite the similarities between go-karting and Formula One, as well as the transferable skills between each sport, there is a massive difference in the technology, money, and prestige behind go-karting compared to Formula One.