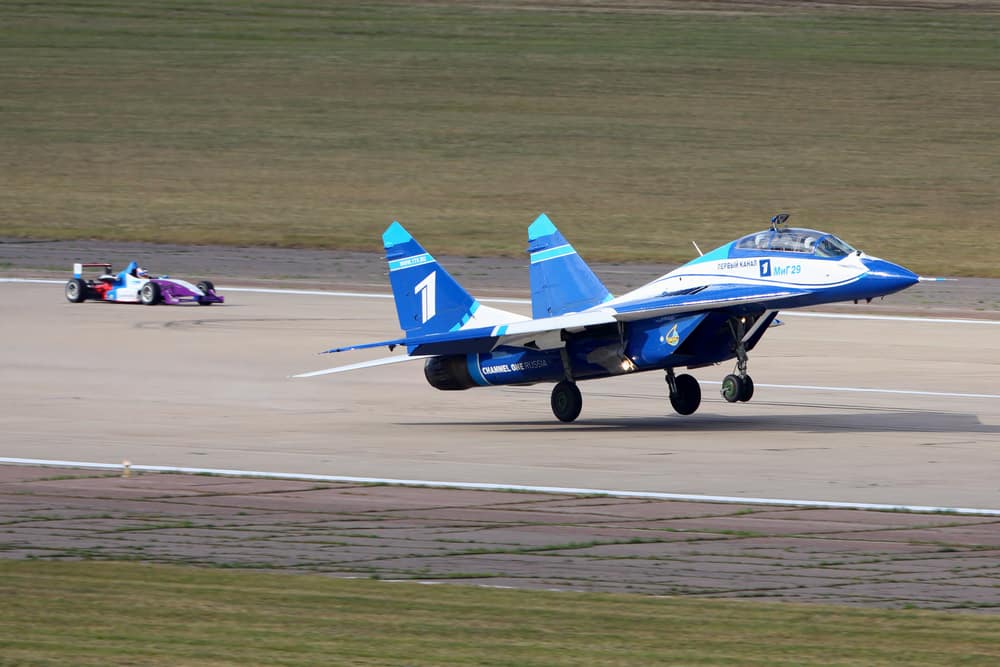 There’s not much out there for any speed freak that compares to the screaming sound of an F1 car at full throttle or the roar of a jet fighter’s engine just before takeoff. Both these beasts are regarded as super athletes in their respective games, pushing the boundaries of speed and performance.

Documented drag races between racing cars and fighter jets show that an F1 car will beat the jet off the start position due to its physical characteristics and a better power to weight ratio. However, most fighter jets will quickly overtake and get ahead of the car once the aircraft has taken off.

It can’t be argued that fighter jets and F1 cars are slackers in their roles. Both are speed and power machines, capable of launching themselves off the line at an incredible pace. But how do they really compare in a head-to-head challenge, and who will become the ultimate performance champion?

Like chariot racing in ancient Roman times, people have been racing cars ever since modern piston-driven cars became a feature on our roads. From the crazy Grand Prix racing of the 1920s and 1930s, Formula 1 evolved with new safety rules and regulations and has gone through several reincarnations since its official introduction in 1946.

The modern F1 car is an open-wheel, single-seater lightweight machine constructed from carbon-fiber composite materials, paired with a 2.4liter, V8 naturally aspirated engine as governed by the FIA (Fédération Internationale de l’Automobile) and is capable of speeds more than 300 mph or 185 mph on average, and some less F1 compliant specimens have been pushed to over 400 km.

In terms of brake horsepower, the total power output from the combination of the petrol and electric elements is in the region of 1,000bhp, significantly higher than any normal road car. The petrol derivative engine runs at around 15,000rpm.

Modern F1 cars can sprint from 0 to 100 mph (160 km) and back to 0 in under 5 seconds, making them the high-performance beasts in the world of competitive motor racing.

A military jet fighter is a single or multi-role, fixed-wing aircraft designed primarily for air-to-air combat.

Since its introduction, the jet fighter has gone through several reincarnations, from the first generation german Messerschmidt ME-262, regarded as the first operational jet fighter in a military role, to the US’s modern Lockheed Martin/Boeing F22 Raptor or the Sukhoi SU-57 operated by the Russian Air Force.

Due to the massive stress exerted on the body of any jet fighter, the aircraft frame is typically made from composite materials, metals such as titanium and aluminum in areas where high stress and heat are generated and supplemented by thermoplastic materials to enhance the aircraft’s strength-to-weight ratio. The aircraft should be as light and as strong as possible.

Like a car’s engine, the jet engine can be classified as an internal combustion engine, but with massively different operating principles. The basic principle creates a reaction by sucking in air through the front of the engine, mixing it with fuel, and compressing and igniting the mixture.

The resulting combustion generated is pushed out the back of the engine, forcing the vehicle forward at high speed. This is called jet propulsion.

May The Force Be With You

Aside from drones and toy cars, military jets and F1 cars cannot yet drive themselves. They require the manual inputs of a human being. Besides, what would be the fun of watching an F1 race without considering the characteristics and personalities of the drivers that we have all become accustomed to?

It’s their individual bravery and capabilities that need to be tested too.

Therefore, it is also particularly important to consider the G forces that are generated and which affect the driver and pilot of their respective speed machines. These G forces are a vector quantity, a number, and a direction.

A typical fighter jet generates a G force of about 8 or 9 along a vertical axis, affecting the pilot’s neck and spine. An F1 car generates around 4 or 5 G but affects the driver horizontally, for example, when cornering. This would typically affect the driver more than the G forces applied to a pilot flying a jet.

On The Track, How Do They Stack Up?

Numerous well-documented spectacles are pitting a racing car against a fighter jet. FOR EXAMPLE, the BBC’s popular car show, Top Gear, has showcased the Bugatti Veyron vs. Euro Fighter Typhoon and the McLaren Speedtail vs. the F35, amongst many others.

The best video documented drag race between a fighter and Formula 1 car was back in 2014 when F1 driver Daniel Ricciardo took on a F/A 18 Hornet of the Royal Australian Air Force piloted by Michael Keightley.

Ricciardo’s Renault-powered Red Bull car shot out ahead of the jet off the line. Its better power-to-weight ratio gave it the edge initially, and the car got a better start off the line. However, the point behind any aircraft at takeoff is to give it enough speed to effect liftoff.

Once in the air, the plane had very little drag, and with two General Electric turbofan engines with an after-burner giving it a supersonic top speed of Mach 1.8 or 1,190 mph, the jet soon left the Red Bull in its vapor trail.

The challenge of racing any racing car, such as an F1 champion winner against a modern supersonic jet fighter aircraft, is that although both machines are designed for speed and agility, they are destined for very different roles and operate in very distinct and unique environments.

When it comes down to the wire, many people will predict that it’s a very close game, and it is, depending on what you are measuring and at what point. In the end, much like trying to predict the outcome of a tussle between a tiger and a crocodile, it’s a largely hypothetical scenario and should be taken tongue in cheek. And it’s all really in the name of fun.

Louis Pretoriushttps://onestopracing.com
Previous article
Worst Formula 1 Race Ever
Next article
How To Get A Job In Formula 1