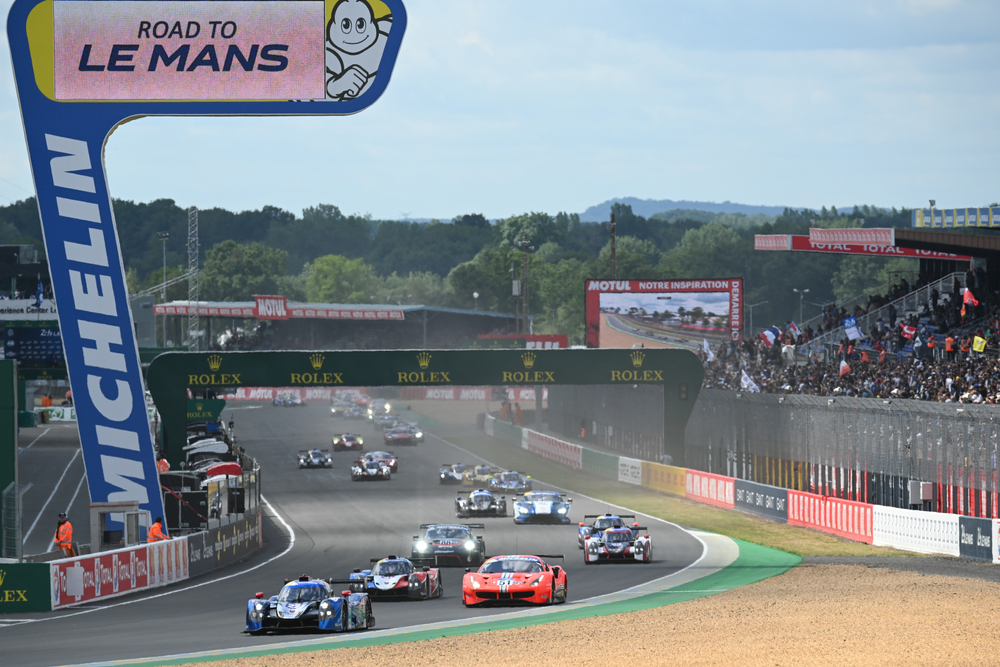 Together with the Indy 500, the 24 Hours of Le Mans, and the Formula 1 Monaco GP, they make up the so-called “Triple Crown.” F1 and Le Mans are two of the most prestigious racing competitions in the world and use the latest technology, although they are very different.

F1 is often called the pinnacle of motorsport, where the world’s fastest cars battle it out in an intense 2-hour race at the limit, while at Le Mans, the most high-tech cars compete in a 24-hour endurance race where it’s all about going the maximum distance possible.

Comparisons are odious but sometimes necessary. Let’s get to it!

Before comparing, since F1 and Le Mans differ so much in some things, let’s see a little about both competitions and their backgrounds to better understand their differences and dynamics.

Formula 1: The Pinnacle of Motorsport

The first Formula 1 championship was held in 1950. The competition aspired to be a premier category in motorsports, with the fastest cars in the world, which had to follow a “formula,” i.e., strict technical specifications to compete.

Since then, the championship has been held uninterruptedly and has evolved considerably, becoming the most prestigious category in motor racing. The championship has gone from hosting 7 Grand Prix in Europe to an intense calendar of 22 races worldwide from March to November.

Prestigious manufacturers such as Ferrari, Mercedes, and Renault build their cars and engines. Other teams, such as Aston Martin or Haas, make only the chassis and buy the engines from the manufacturers. All cars are very similar, as they must comply with strict technical regulations.

F1 cars have evolved drastically since the early days, being much faster, safer, and with a great importance on electronics. Today’s cars use highly efficient 1.6-liter V6 turbocharged hybrid engines, have open wheels and open cockpits, and are single-seated.

The 24 Hours of Le Mans has been held annually since 1923, except for 1936 and between 1940 and 1948, and is the oldest and most prestigious endurance motor race in the world. The race is organized by the Automobile Club de l’Ouest (ACO) and is part of the FIA World Endurance Championship (WEC).

It is held in June at the Circuit de la Sarthe, in the French region of Le Mans, which is a 13.626 km circuit consisting of closed public roads and dedicated sections of racing tracks. Unlike in F1, the winner is not the one who crosses the finish line first but the one who drives the most kilometers in 24 hours. In addition, there are 3 drivers for each car, and they race in shifts, so teamwork is key.

Since its inception, the cars have evolved significantly. The race has become a real technological laboratory because, unlike F1, the technical regulations are much broader, leaving a wide range of aerodynamic and engine designs open.

Major manufacturers participate in Le Mans and small private teams, so both professional and amateur drivers race there. The latter are usually wealthy people who race their own cars and are called “Gentleman Drivers.” They compete simultaneously in two types of cars divided into four categories, which are:

Within this category are the LMP (Le Mans Prototype, formerly called LMP1), which are the most powerful and the ones we will compare with F1 cars, and the LMP2, which are the equivalent of Formula 2, a little slower, with cost and performance limitations.

As we have seen previously, the Le Mans Hypercars (LMH) are the fastest cars competing in the 24 Hours of Le Mans, so they will be the ones we will compare with Formula 1 cars.

The aerodynamics of an F1 and an LMH are very different since both categories’ philosophies are very different. In F1, the tires and suspension geometry are uncovered, and the cockpit is open. F1 cars have a very complex front wing, which, together with the elongated nose, aims to direct the air sideways to create less turbulence.

On the other hand, the LMHs are also single-seaters, but they have a closed cockpit with simpler aerodynamics. At the front, the splitter is much simpler than an F1 front wing, although its purpose is the same, to “collect” the air and create downforce, along with the rest of the elements that make up the bodywork.

F1 cars have multiple bargeboards and wings and very characteristic rounded sidepods. The rear wing of an LMH car is very simple and small, designed for top speed on the long straights of La Sarthe, while F1 rear wings are very complex and can be modified between races to generate more top speed or downforce.

In the WEC, each team can choose between a combustion engine or a smaller turbocharged hybrid engine. Toyota is the only team to have used a hybrid engine in the 2022 24 Hours of Le Mans, with a 2.4-liter V6 twin-turbo engine generating 1,000 hp and all-wheel drive. The Toyota GR010 weighs 1040 kg.

In contrast, teams such as Glickenhaus or Alpine use 5.5-liter internal combustion engines, and their cars weigh 833 kg.

In both F1 and Le Mans, there are many restrictions on the weight of the cars, as both must comply with the minimum and maximum weight limits. In F1, cars cannot carry more than 110 kg of fuel, while in Le Mans, there is no fuel consumption limitation, except for Toyota, which has a limit of 80 kg of fuel per hour.

In both F1 and Le Mans, the ERS system, which is recharged under braking, can be used. In Le Mans, the ERS generates 8 megajoules per lap, while in F1, it is 4. In F1, there is also the DRS, which is a system that allows the rear wing to be opened to generate more top speed on the straights and facilitate overtaking.

While in F1, everyone must comply with the same regulations, in the WEC, it depends on each team. A so-called “Equivalence of technology” aims to balance the performance of hybrid and internal combustion cars through measures such as increasing the weight of the fastest car or reducing its amount of fuel.

Toyota has been the winner of the last 6 editions of the 24 Hours of Le Mans, and the Japanese team has been the focus of the restrictions so that the rest of the teams can match them. For example, up to 190 kph, they cannot activate the electric engine, which turns the car into an all-wheel-drive car. The weight of the car has also been increased to reduce its performance

Is An F1 Car Faster Than A Le Mans Hypercar?

This is the question you will all be asking right now. However, it has many nuances.

The real answer is that it depends, as each car is set up for a different discipline. An F1 car is faster than an LMH on a single lap and faster in a 2-hour race, while an LMH would win in a long-distance race.

On a Formula 1 race weekend, two free practice sessions are held on Friday, and one on Saturday, before qualifying. Qualifying consists of three sessions, Q1, Q2, and Q3, in which drivers try to set the fastest time possible to determine their starting position for the race day.

Finally, in Q3, the remaining 10 drivers will fight for pole position, and the grid places up to 10th in a 12-minute session, and only they will have to start the race on the tires with which they did their fastest lap in Q2. Drivers can choose the tires for each session but must manage them well to have new ones available for the race.

On the other hand, at Le Mans, qualifying is held in two sessions. The first qualifying session is one hour long and takes place on Wednesday evening, where all the cars of the four categories participate in setting the best possible lap time.

The top six in each class move on to a second session, called “Hyperpole,” which lasts 30 minutes and is held on Thursday afternoon, where pole position and starting positions up to sixth place will be decided. In this session, drivers cannot refuel, but they can select the tires and use two sets.

Formula 1 races are held on Sunday, usually around noon in the country hosting the GP. However, there are some night races and are limited to a maximum of two hours of racing in a 3-hour window (in cases where the race is stopped due to a red flag), and the distance of a Grand Prix cannot exceed 305 km, except Monaco, which is about 260 km.

In addition, all cars must make at least one pit stop, as they must use at least two of the three compounds provided by the tire supplier, Pirelli, for each Grand Prix but cannot refuel. The driver who crosses the finish line first wins the race.

WEC races are much longer, with a minimum duration of four hours, hence the term “endurance races.” Most races last six hours, although some last eight hours, and others twenty-four, such as Daytona or Le Mans.

Unlike Formula 1, the winning car is the one that has traveled the greatest distance when time runs out.

In the WEC, there are several scoring systems depending on the length of the race. In 8-hour races, the same scoring system applies for the top 10 as in F1, plus 0.5 points for each car, finishing after 10th place and one point for the pole position in each category.

Formula 1 and Le Mans are two of the world’s most prestigious motor racing competitions and two of the most attractive and exciting to watch as a spectator.

In F1, the goal is to compete with the fastest cars in the world in an intense 2-hour race, while in Le Mans, the goal is to be fast, but above all, to endure the 24 hours, where the real challenge is not the rivals, but the race itself.