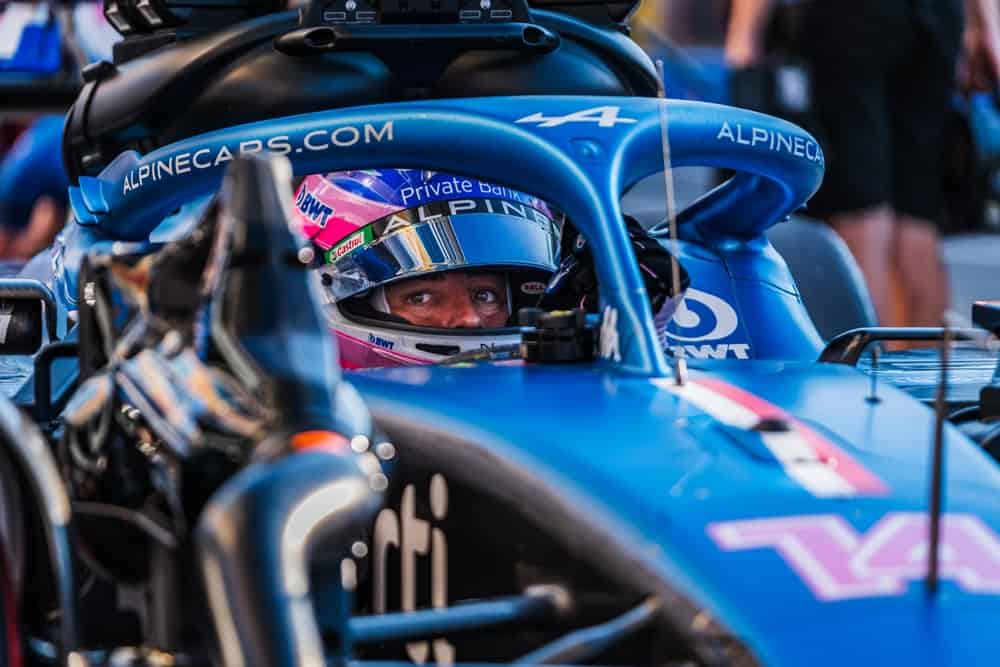 G-force is a significant part of Formula 1. It is a naturally occurring thing that follows the laws of physics, but if drivers do not prepare their bodies for it, they’ll struggle to race at a high level. So, let’s look at what G-force actually is and its influence on Formula 1.

G-force is the force exerted by the earth’s gravitational pull on your body. However, we only feel it when a mechanical force (like an F1 car braking) exerts a force on our body. This is because the force of gravity resists the mechanical force, which is why it feels like we’re being pushed.

G-force is often felt during rapid acceleration or rapid deceleration during an F1 race, like when the driver brakes when going around a corner. So, let’s have a look at what G-force is in some more detail and how Formula 1 drivers deal with it during a race.

Before examining it in further detail in the context of F1, we must define what G-force is, so we better understand it.

The term G-force comes from the gravitational force equivalent. So as defined by The Merriam-Webster Dictionary, it essentially means the “force of gravity or acceleration on a body.” G-force indirectly produces weight, which the body feels at high speeds during rapid acceleration or deceleration. We can only experience G-force through mechanical forces, as G-force is the resistance of the earth’s standard gravitational force to the mechanical force.

In everyday life, we won’t be exerted to extreme G-force, but you might feel it if you accelerate quickly when you’re driving and find yourself being “pushed” back into your sheet. However, some people, like F1 drivers and fighter pilots, will experience it much more regularly due to the high speed they travel. So, in the next section, we’ll take a look at G-force in an F1 context.

Practically, G-force plays a massive role in Formula 1. The massive forces exerted on the body place a lot of strain on it. Around corners and during rapid braking, the body will tend to move a lot, and the neck struggles to keep your head lifted. A driver’s knees and core will also tend to move in the direction that the car is turning.

A useful way to think about it is if you’ve ever been on a fast rollercoaster before. When it turns suddenly or quickly comes to a stop, and you feel your body either being pushed back into the seat or straining against the straps/support, it is because you are experiencing g-force. Formula 1 drivers experience a very similar sensation in an F1 car. However, the difference is that they have to endure over 50 laps of it, and they’re driving a car that can reach speeds of around 200 mph (320 km/h), so they must remain in control at all times.

How Much G-Force Do F1 Drivers Experience In A Race?

During a regular F1 race without any accidents, F1 drivers will experience up to 5Gs. This means that their body is essentially 5x heavier than their normal mass. In comparison, in a fast road car going around a corner, you might experience 1-1.5Gs. In massive accidents, up to 60G’s can be exerted on a driver’s body, which is why F1 drivers must be protected in their cockpits. If the survival cell of the F1 car weren’t as safe as it has become, many more drivers would die in the accidents we see them able to walk away unscathed.

How F1 Drivers Deal With G-Force

A huge amount of G-force is exerted on a Formula 1 driver’s body during a race. The biggest load is placed on the neck and the core, so these body areas must be particularly strong. As you can imagine, not being able to see properly while hurtling around a corner in an F1 car is not particularly, so there is a lot of emphasis placed on neck strength in F1.

How F1 Drivers Strengthen Their Necks?

F1 drivers can do all sorts of different exercises to strengthen their necks. These range from hanging their heads over the side of a bed and moving it to ones where a load is applied to the neck. For the latter, the driver’s trainer will likely either hang a small weight plate from a driver’s neck in a controlled manner while the driver is lying down, or they will pull a band that is attached to the driver’s head, and the driver has to resist this.

According to almost every F1 driver, training their necks is one of the most uncomfortable exercises they have to do. But, unfortunately for them, without a strong neck, they won’t stand a chance in a Formula 1 car at the speeds they race at.

How Do F1 Drivers Strengthen Their Core?

Having a strong core is also very important for F1 drivers, as it helps keep their bodies centered in their seats. A strong core is crucial for the same reason as a strong neck. Without it, drivers won’t be able to control their cars properly, as their bodies will not be in the optimal position.

Formula 1 drivers can strengthen their core through various exercises. These include traditional core exercises like sit-ups, normal crunches, bicycle crunches, and planking. These will be done regularly to improve core strength.

How Else Do F1 Drivers Counteract G-Force?

Luckily, it’s not solely up to the driver’s body to counteract the G-force they experience. Drivers are strapped in with multiple seatbelts into the cockpit of their car. While this is also obviously for safety reasons, being strapped in so tightly helps with G-force as the body cannot move around very much.

Drivers can also wear knee and elbow pads to provide their joints with some cushioning to help alleviate the strain of being forced against the side of the cockpit. This is because the cockpit is not padded, adding extra weight to the car, and every little bit counts on a Formula 1 car.

What Is The Biggest Amount Of G-Force Experienced In F1?

In recent years, we’ve seen some massive accidents in Formula 1, where drivers have slammed into the barriers at high speed. Some of these crashes have been so serious that drivers often ended up in the hospital (usually as a precaution, though). However, instances where drivers have survived have only been included.

G-force is a vital concept to understand in F1, as drivers need to contend with it. It is one of the main reasons why F1 drivers undergo such intense physical training; if they cannot cope with high amounts of G-force, it leaves them in a compromised position to drive their cars.