Has An F1 Driver Ever Hit A Safety Car? 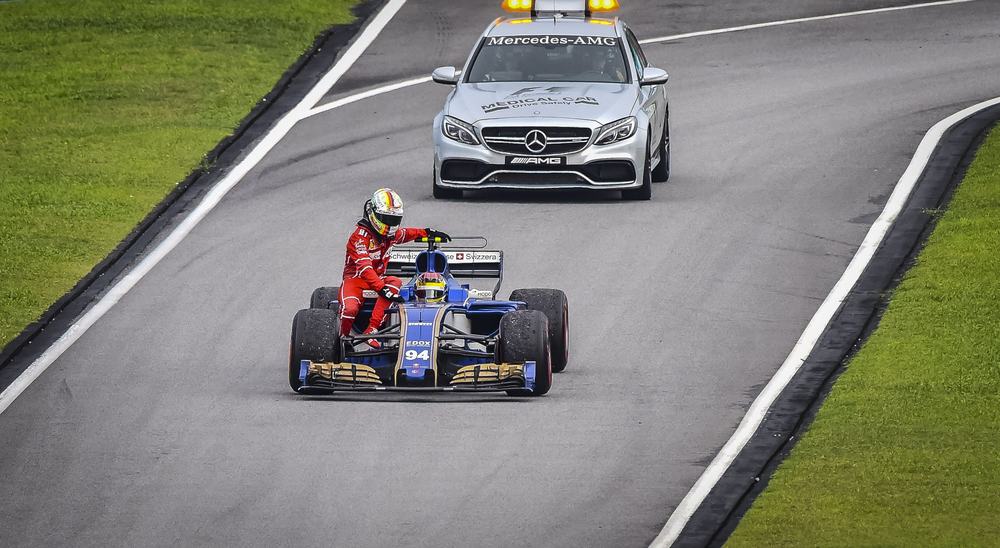 No F1 Safety Car has ever been hit by an F1 driver since its definitive inception in 1993. Even when used sparingly before this date, no record exists of such a crash. It helps that the Safety Car driver since 2000, Bernd Maylander, was an accomplished racing driver before taking on the role.

The Safety Car never stops on the track; its job is to lead the race cars during periods when marshals are working, but the situation isn’t dangerous enough to call a red flag. Their job is to lead race vehicles before a restart, either during the same SC period or after a post-red flag restart.

The first time a Safety Car was used in Formula One was at the 1973 Canadian Grand Prix when a yellow Porsche 914 was used after a series of mishaps in severe weather conditions.

No F1 drivers hit that first Safety Car, and to date, no F1 driver has ever hit a Safety Car or crashed into one during an F1 race.

If you ever see an F1 driver crashing into a stationary car on a track, immediately you should figure that it’s not the Safety Car, as its role on the track is to lead the F1 cars around the track, not to stop and assist.

During Formula One races, the FIA medical car, a Mercedes-Benz estate car, or an Aston Martin DBX responds to accident scenes. It is now being driven by Alan van der Merwe, a professional medical car driver.

The car’s passenger is normally a certified FIA doctor (in recent years, Dr. Ian Roberts), who checks to see if the drivers involved in accidents require medical attention. Over the years, the Medical Car and its driving crew have mostly avoided being hit.

“I didn’t see any yellow warning flags as I came into the corner at the end of the start-finish straight. A Ferrari in front of me took part of my view and as it moved to the right, I suddenly saw Bernoldi as the team warned me over the radio that the session was being stopped.”

“By then it was too late – although I was hard on the brakes, the only way I could get through was to the left of the Arrows. I knew it was my only chance.” – Nick Heidfeld, Interlagos – 2002

Pretty scary moment for Nick Heidfeld, but spare a thought for Alex Ribeiro, ex-racing driver, and pilot of the Medical Safety Car that day. Enrique Bernoldi had a big accident at turn one during a practice session. The red flag came out, and the Medical Car was on its way as per safety regulations.

Ribeiro parked his C55 Mercedes in front of Bernoldi’s car, opened his door, and was about to climb out when the Sauber of Heidfeld hit his door. He would have been seriously injured if he were a second quicker to the scene.

Ribeiro is no stranger to being involved in a crash with the Medical Car, as he crashed one in Monaco in 2000.

F1 Drivers Getting Hit By The Medical Car

It sounds unbelievable that an F1 driver could get hit by the very vehicle assigned to assist them in case of an accident. I present Japanese driver Taki Inoue, an F1 driver almost driven over by an F1 Medical Car.

“Bang! Someone hits me very hard. But I landed on my feet, very good, perfect landing, I think nine-point-nine-nine.” – Taki Inoue

While the above incident was serious and close to tragedy, the following story will make you grin. One of F1s worst drivers to ever climb behind a steering wheel, the unfiltered Taki Inoue, managed to get himself hit by the Medical Car coming to assist him. Can’t make this stuff up.

Inoue’s engine caught fire midway through the Hungarian Grand Prix of 1995. He managed to stop the car, calling over to the marshals to come to extinguish his car. After climbing out, he inspected the marshals’ work. Not satisfied, he proceeded to take a fire extinguisher from a marshal.

Unaware of the Medical Car approaching, he was hit as he started to make his way to his car. Yes, he managed to land on his feet, but it must have hurt as one of his legs was broken in the collision.

His reward for being a clown? He had to wait an hour for the helicopter to take him to the hospital.

F1 Drivers Getting Hit By The Safety Car

Yet again, it’s our Japanese friend, Taki  – “You never need to ask who was the worst Formula 1driver ever. It was definitely me” –  Inoue, who is again involved in the seemingly impossible.

The following incident was not of his doing, but maybe a sign that F1 was not for him, and retirement should follow suit.

“It’s true! I learn that in UK. When balls move, brain is fine. When big crash, scissors, take off the overalls, see the balls, hit the balls, then when balls move, this guy’s fine. If balls don’t move, then there’s a problem with brain damage, I think.” – Taki Inoue

He may have been one of the worst drivers in F1, but Taki was never boring. Depending on your point of view, the lucky Japanese were again involved in a collision with a track car; this time, the actual Safety Car.

At the end of the first practice during the weekend of the Monaco Grand Prix in 1995, Taki’s car was being towed on the back of a truck to the pit area. Taki decided to stay seated in his car and hitch a lift, a lift that soon turned into a nightmare.

While relaxing in his towed car, the Safety Car came charging around a corner, smashing into Taki’s car. The car flipped, smashing Taki’s helmet in the process. What saved Taki’s life that day was that he put his helmet’s lid on a few minutes before the crash.

The following six F1 drivers managed to do the unthinkable and crash while the Safety Car was deployed:

The safety car has an impeccable record. Bar one incident with a certain Japanese journeyman, the Safety Car rarely causes accidents, and no driver has managed to hit one. The same cannot be said of F1s medical car, which has seen its fair share of crashes.

Louis Pretoriushttps://onestopracing.com
Previous article
Is There A Weight Requirement Or Limit For F1?
Next article
What Age Do F1 Drivers Start Karting?