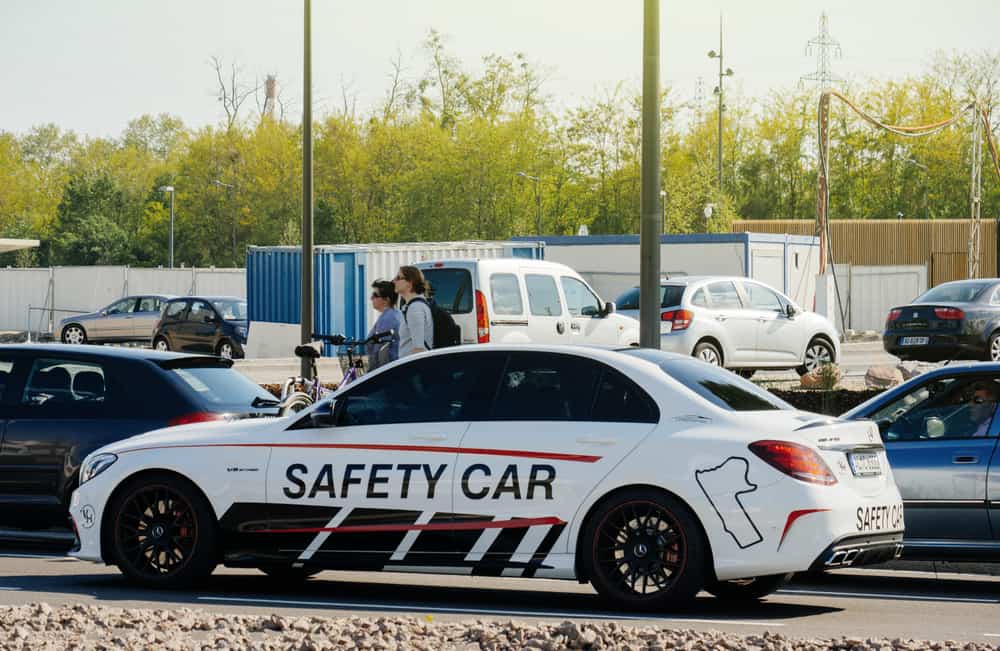 I normally jump from station to station on the television when I can not find something to watch; on one of these occasions, I saw a safety car out on a formula one track in wet and rainy conditions. The conditions were not perfect for a race, which made me wonder: “ Has the safety car ever crashed while out on F1?”

There are no recorded incidents where the safety car crashed while out in formula one. There has been a close call, though, like the time the safety car driver nearly crashed and went off the side of the racetrack. However, medical safety vehicles have been involved in crashes while out in F1.

I spoke to some friends and family members who are true F1 fans about this topic, and they suggested that I do more extensive research even back to the inception of F1 motorsports; in this post, I will share what I found out about crashes involving the safety car whilst it is out in F1.

Did The Safety Car Ever Crash While Out In F1?

The driver of a safety car in F1 is a professional driver that received extensive driver training and has a lot of years of experience behind the wheel of a car; as a result of the experience and training, there have not been recorded cases of the safety car being involved in a crash while being out on the track in F1.

The fact that there hasn’t been a crash involving the safety car is astounding if we take the number of years that F1 has been around into consideration. There is one case where the driver of the safety car made an error while passing the medical car and nearly crashed.

Near Crash Of The Safety Car After Passing The Medical Car

The official AMG safety car driver made an error once while making a late pass on the medical safety car. The vehicles were approaching a turn, and the driver of the safety car had to brake really hard not to crash.

The safety car still left the racetrack, but the competent driver managed to get the safety car back on the track fast without causing a serious crash. This incident shows that a brief loss of concentration, even from the most experienced driver, can cause an accident.

Has The Medical Safety Car Ever Crashed While Out In F1

The official safety car is not allowed to stop while leading the other cars through hazardous situations. The medical safety vehicle, on the other hand, can and do, and then sometimes incidents occur.

There are a few recorded cases where the medical safety car was involved in a collision while responding to an accident on the racetrack. In this part of the article, each one of these incidents will be listed under its own subheading.

Taki Inoue Gets Hit By The Medical Safety Car

Even though this situation is not a serious collision or crash, it remains one of the most talked-about crashes involving a medical safety car. Taki Inoue gets out of his F1 car because of an engine fire and then gets hit by the medical safety car after Taki Inoui grabs a fire extinguisher from one of the marshals.

From this incident, it is clear that when bad luck was handed out that Taki was definitely among the group that was in the front of the pack. Luckily in this situation, there was no serious damage or injury, and up to this day, this incident remains one of the strangest ones in the history of this motorsport.

Nick Heidfeld Took Out The Medical Safety Car In 2002

During the Brazil Grand Prix of 2002, a medical safety car driver named Alex Ribeiro nearly had a brush with death just as he was responding to an accident involving Enrique Bernoldi. Alex positioned the Mercedes medical safety car on the side of the racetrack, and as he was about to exit the vehicle, an unexpected incident occurred.

Nick Heidfeld takes out the door of the medical safety car as Alex opens it to exit the vehicle. From looking at the video footage, it is evident that Nick chose to pass the safety car at a dangerous angle after he nearly collided with the other F1 car. I am sure that this brush with death will be remembered by all the involved parties.

If Alex had exited the medical safety car just a second before he did, it would have resulted in a severe or even fatal situation, so at least there was only damage to the vehicles, and luckily the driver was not injured. Alex Ribeiro crashed the medical safety car in 2000 before the Monaco Grand Prix, and this incident once again reminded people of that unsavory situation.

Has The Safety Car Ever Crashed During Practice Rounds?

There was an unrecorded incident involving the safety track car driven by Jean Ragnoti and the vehicle of the worst F1 driver Taki Inoue. Taki Inoui was hitching a ride in his F1 car while it was being towed during the practice round. The collision resulted in Jean Ragnoti losing control of the track car and then rolling multiple times onto the barriers.

Taki Inoui was admitted to the hospital but was cleared to race the following day. Jean Ragnoti was also not seriously injured.

The information in this article once again proves that motorsport can be extremely dangerous. In cases where safety cars are brought out during an F1 race, the safety car driver needs to do everything humanly possible to lead the F1 drivers through dangerous situations, and so far, they have been doing a splendid job during races.

Human error, however, can play a role in any crash, and that is why safety car drivers are trained and experienced. I hope you enjoyed this piece on the topic of safety car crashes.