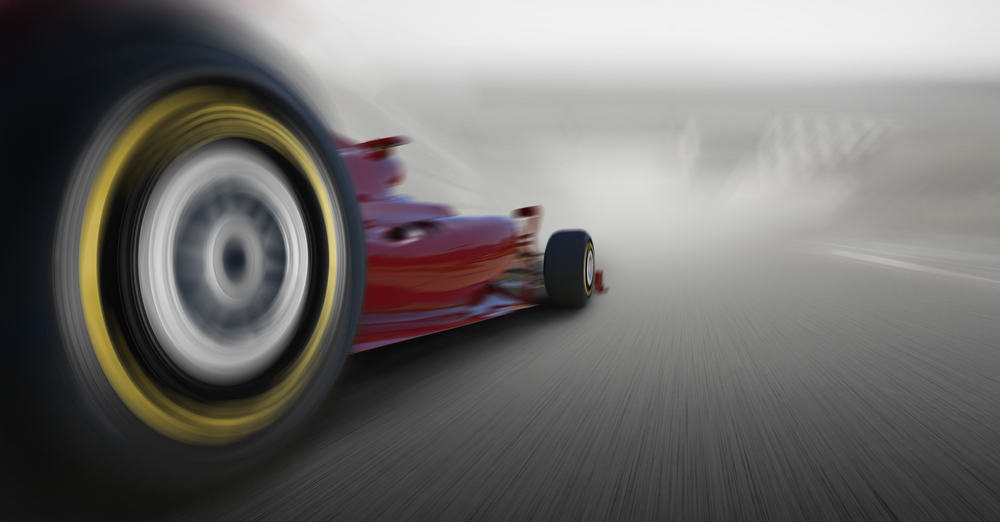 For a Formula 1 fan, one of the great joys in following the sport is in witnessing the extreme speed with which these technological, mechanical marvels travel around a race track. But why does it seem that these days, despite the cars being much faster than their F1 predecessors, they look so much slower on TV?

F1 cars look slow because of the technologically advanced television cameras that capture the incredibly express action of the modern F1 cars negotiating their way around a Formula 1 race-track with remarkable precision, from a great distance, and with fast focus. This very accuracy is what makes the cars look slow.

We’re going to look at exactly what it is about the latest camera tech that contributes to this. In other words, how is the portrayal of speed from live-action via the camera to your TV screen somehow lost in translation.

And we’re going to throw a curveball at the Fédération Internationale de l’Automobile; the administrators of Formula 1, the sponsors, and, for good measure, one at the TV production managers of the spectacle as well.

What is it with These Modern TV Cameras?

The latest tech in Television Cameras can do everything the previous generation of TV tech was able to do, but they will now do all of that from much further away, in a higher image resolution, and with sharper and more rapid focus. They can track the cars with greater accuracy too.

This all sounds fantastic though. Who would not wish to see the cars in pinpoint detail? See the drivers in sharp focus as they wrestle their way around a difficult corner while searching for the ultimate line and that elusive apex.

Well, no one really, but is it too much to ask that we see all that but at the same time be thrilled by an accurate visual representation of just how quickly the car is traveling around that corner.

Piero Ferrari, the son of Enzo Ferrari of the prancing horse has this to say:

“With the effects of the pandemic, you can only follow F1 on television. We are running the fastest single-seaters in history, but the images we get from TV can’t give you the sensations you get when you are on the track and what you feel is real. What people and fans get is something different. These are F1 cars that go over 330 km/h, but watching them on a video you don’t get the feeling of a different speed compared to a Formula 2 race”

Straight from the horse’s mouth, you would have to agree.

The Telephoto Problem, Straightaways, and Runoffs

The latest TV cameras can zoom in on the most minute details of whatever they are recording from a very great distance indeed. Because of this ability, the producers can place their camera positions a substantial distance away from the track itself and yet are still able to ensure that the speeding F1 car is framed perfectly within the lens of the camera and subsequently onto your television set in your living room.

This is where one of the great problems in depicting the speed of the car comes in though. A camera placed at the end of the main straightaway of a Formula One race track is often a mile or more away from a car just entering the main straightaway. On top of that, the latest cameras can provide a relatively small depth-of-field (DOA – Depth-of-field is the distance between the nearest and the farthest objects that are in acceptably sharp focus).

This along with the continual focus on the car itself, as it makes its way down the straightaway, invariably leads to the distortion of foreshortening whereby it looks like the car is traveling over a shorter distance than it is, thus presenting the illusion that is going quite slowly.

So it is a lot more difficult for the human eye to gauge the speed of a car driving towards you or even away from you if it is kept, by the camera operator, in full-frame, and sharp focus.

To illustrate the opposite of this effect – and to demonstrate just how unbelievably quick a Formula One car is in comparison to an ordinary sports car – have a look at this video taken from a fixed camera point. The depth-of-field is set to a distance that accurately portrays the immense speed and does not track the cars as they drive away from the camera.

There is another notable problem with placing the cameras some distance away from the track itself. These days, safety is of paramount concern, and the gung-ho days of cameramen hanging off overhead gantry’s trying to get the ultimate shot of the graphics on the top of a driver’s helmet are long gone.

Health and Safety Administrations the world over have put an end to these life-threatening shenanigans.

However, the vast runoff areas around the majority of race tracks on the Formula One circuit all but preclude the accurate portrayal of the sensation of speed.

An easy way to explain this is to imagine yourself driving your car down a freeway at 60 miles per hour. No problem right? You hardly notice the speed you are traveling because there are no stationary references close to you with which you could judge your relative speed. Al the other cars are traveling along at the same speed as you are too.

Now imagine driving at 60 miles per hour, through a small town, with shopfronts, street lamps, and other road furniture whizzing past within a couple of feet of your car doors. The sensation of speed in this instance would be much greater, even though your actual speed would be the same.

Corners and the Panning Problem

Formula One cars are quite obviously traveling at their slowest when entering, exiting, or negotiating a corner. The producers will usually place their cameras head-on to the corner to catch the action as a car accelerates out of the corner or from behind as it is slowing down to enter the corner.

There are often cameras placed in mid-corner too but this is where the car is moving at its slowest speed so, while the technical aspect of the driver negotiating a difficult turn at the greatest possible speed is fascinating to the F1 fan, it does not deliver on the demand for the depiction of exhilarating, extreme speed.

Modern cameras are also able to pan very smoothly and lock onto the car as they are going through the turn. This ability tends to blur anything in the background, however, reducing any perceptible stationary references on the side of the corner to a point where they are irrelevant in discerning the speed of the car.

It should also be said that the suspension systems of current F1 cars are so sophisticated that they can drive through even the most technical corner with the minimum of fuss and drama. This tends to make the cars look as though they are traveling quite slowly in comparison to earlier F1 cars. Have a look at the Ayrton Senna Monaco Qualifying lap below.

Rolex, Ineos, Hewlett Packard, Monster Energy, Epson, and Puma to name just a few of the sponsors who, after spending millions of dollars to place their names on the side of the cars and the side of the race track, will invariably demand their pound of flesh. This takes the form of time. More specifically, the amount of time the producers can place the logo of the sponsor on your eyeballs.

Formula One and the Fédération Internationale de l’Automobile (FIA), notwithstanding that it is the sport we love, is also a business. A business must make money and long, lingering shots of the sponsor’s decals on the side of the F1 motor cars is how a lot of this money is made.

Without these sponsors, there would be no Sunday Grand Prix so this is probably a small and worthwhile price to pay.

Modern Formula One cars are not slow. They are faster than they ever have been. Consider this qualifying lap from the great Ayrton Senna in Monaco 1989.

That looked super fast and it was. He managed to qualify on pole in a time of 1:25.501. However, you should then also consider the current fastest qualifying time in Monaco, Lewis Hamilton set it and it stands at 1:10.166. Over 15 seconds quicker than Ayrton managed.

Take a back seat in Lewis’ Mercedes in this video:

Louis Pretoriushttps://onestopracing.com
Previous article
Can Formula 1 Drivers Wear Glasses?
Next article
How Much Power Do F1 Engines Really Have?