How Accurate Are F1 Simulators? 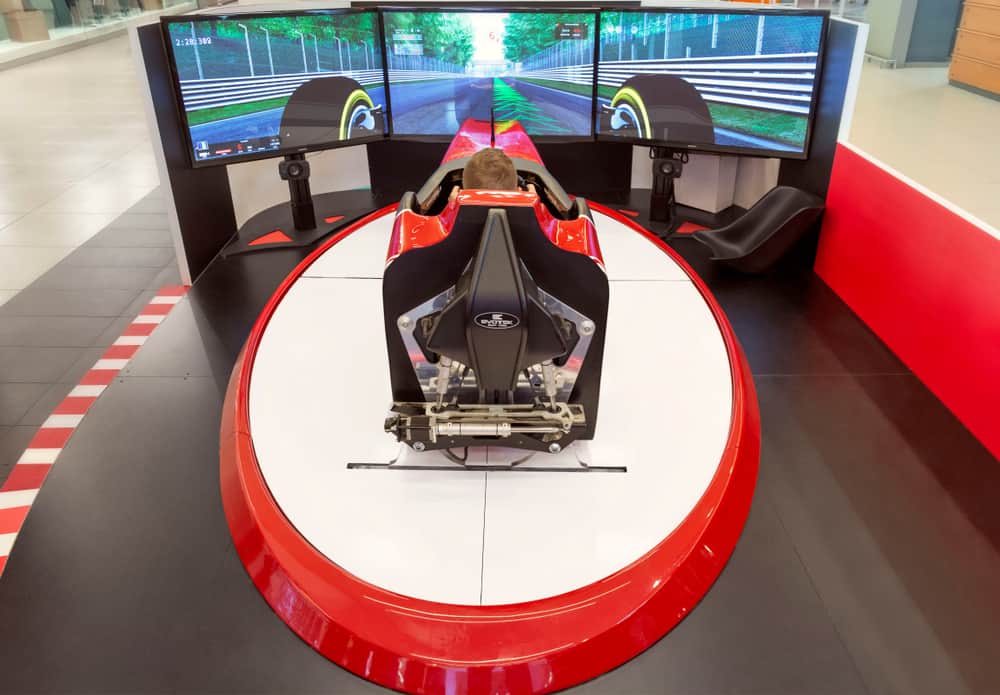 As a Formula One fan and avid watcher of Netflix’s “Formula One: Drive to Survive,” it got me to consider the technicalities of Formula One, most notably: How accurate are F1 simulators?

Human-in-the-loop Formula One simulators are considered to be very accurate virtual simulators of actual race tracks and conditions. Both static and motion-based simulators allow drivers and teams different methods to accurately prepare for races having to drive on a track.

There are different driving simulators that Formula One teams and drivers use. These simulators operate differently, providing varying degrees of accuracy and information; let’s break some of these down!

How Accurate Are Different Types Of F1 Simulators?

While none of these above simulations are 100% accurate, they provide different experiences and information to both drivers and teams, which are used in conjunction with “real world” data to improve performance.

Human-in-the-loop simulators are interactive simulators, whereby drivers physically interact with the simulation to recreate driving on actual tracks and in certain conditions.

The static simulator consists of a monocoque tub of a Formula One car mounted to the floor and placed in front of a large spherical screen or three separate screens, positioned in such a way as to shield the peripheral vision of the driver.

The tub consists of a bespoke interface of the Formula One vehicle, intended to simulate. This includes a steering wheel and dash electronics that replicate their real-world counterparts.

Finally, the steering rack consists of motors that recreate variable forces with subsequent force feedback, while the steering rates and mappings are interchangeable with actual Formula One vehicles.

The tracks themselves are incredibly detailed and are developed using lidar scanning. Unlike commercial simulators, such as casual simulators for video games where developers manually design tracks, lidar scanning uses 3D mapping to recreate tracks.

Unlike the static simulation, which has the monocoque tub mounted to the floor, the full-motion simulator elevates the driver’s platform up 15ft in the air.

This elevated platform is supported by five electro-mechanical arms and is accompanied by a driver’s seat, pedals, a steering wheel, and a large three-screen display.

The purpose of the elevation is that the platform has the freedom to move with six degrees of freedom in all directions when operated. This allows for improved accuracy of forces experienced by drivers in a race and acclimatizes drivers to various conditions.

The ease of usage and accuracy of both human-in-the-loop simulators is so great that even during race weekends, teams will often have a test driver in the simulator subject to the actual conditions of the race track where the Grand Prix is held.

The information from the test drives is then sent to the team and drivers at the actual event and then used in conjunction with observed conditions in real life to better prepare the vehicles and drivers for the upcoming events.

While the human-in-the-loop simulations aim to recreate an accurate simulation primarily for the benefit of Formula One drivers, computer simulation serves to better develop strategies and technologies for Formula One teams and the sport as a whole.

Computer simulation removes the driver from the simulation process altogether, meaning hardware is null and void in its development and usage.

Instead, computer simulation takes racing lines performed and generated by drivers during their human-in-the-loop sessions and uses variations of this line under various conditions to compile terabytes of data.

This allows teams to run thousands of simulations at an increased speed under various conditions, rather than manually recreate different conditions and yield data through human-in-the-loop tests in real-time.

Although the data presented by computer simulation is not entirely accurate to the conditions on a race weekend, it provides a starting point from which teams will configure their vehicles and prepare their drivers before the start of the weekend.

Further to individual vehicle performance under certain track conditions, computer simulation allows for the introduction of rival teams and drivers, whereby each can be configured in such a way as to produce a variety of scenarios and outcomes.

This allows teams to run thousands of potential strategies against the possible strategies of their opponents, providing vast sums of data upon which teams can plan the race weekend to counter a variety of strategic options their opponents may use.

Do All F1 Teams Use Simulators?

While all Formula One teams use a variety of simulators to assist in vehicle configuration, team strategies, or prepare their drivers for race weekend, not all drivers believe that simulators are an accurate representation of racing.

For example, Max Verstappen and Lando Norris, as two of the younger drivers on the Formula One circuit, believe that simulators are an accurate representation of driving and have simpler, commercially available simulators at home to practice.

See the article from formula1.com below for a visualization of their home setups:

In contrast, Lewis Hamilton, a seasoned Formula One champion, believes that while simulators provide valuable data to a team’s engineers, they do little to prepare drivers for the experience of racing.

For a full transcript of Lewis Hamilton’s opinions, see below the article from autosport.com:

Despite the mixed reviews of Formula One simulators from specific drivers, the consensus among the grid and their teams is that the different simulators provide an authentic driving experience for users and invaluable information for their teams.

No doubt, as advancement in virtual technology, hardware, and software continues. Formula One teams, in collaboration with tech companies, will continue to push the boundaries between real and simulated racing!

Louis Pretoriushttps://onestopracing.com
Previous articleThe Best F1 Races Of The Decade
Next articleHow Many Spare Parts Do F1 Teams Have?