How Are Monster Trucks Transported? 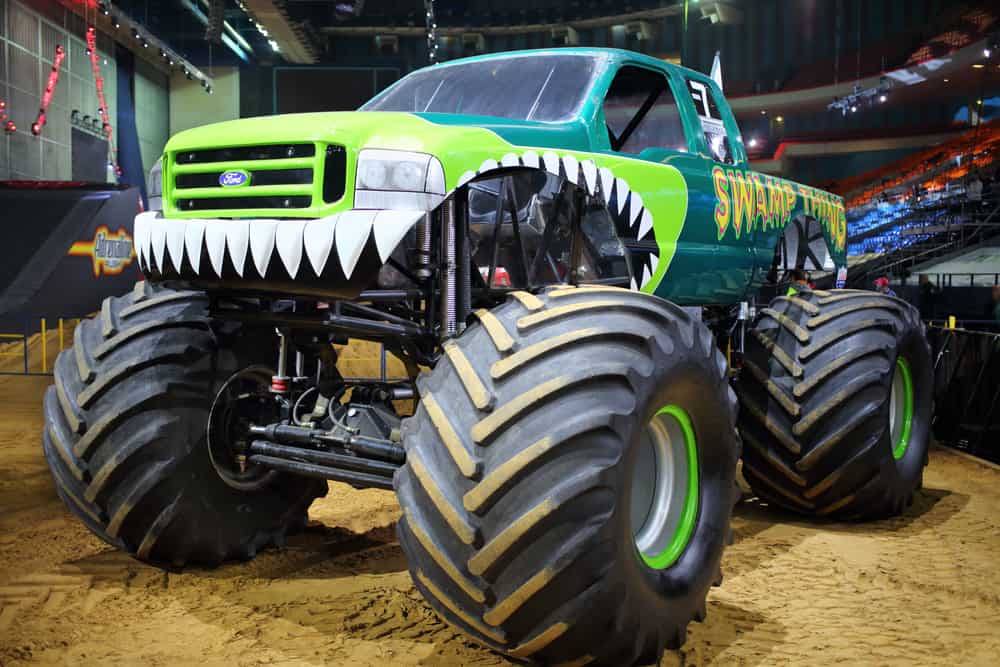 My first monster truck extravaganza was on a continent very far from the USA, and the smell of gasoline and excitement filled the air. Thousands of people flocked to see these massive powerhouses perform stunts and their roaring engines ripping up dirt and crushing metal. As an overthinker, I started to wonder how these trucks get here besides obviously via a big cargo aircraft? How are monster trucks transported?

Monster trucks are transported in specially designed trailers or abnormal weight low beds. They are carefully disassembled after each performance by a dedicated road crew using forklifts, slings, and ladders. A variety of trucks are implemented for the transportation of the body, massive tires, and all the extra spare parts.

Obviously, the enormous amount of work that goes into the assembly and transportation of these behemoths is not something many people will ever see. The road crew is highly skilled, and each of them has a specific role to play. Some are mechanics, and others are lifting engineers. Taking the weight and size of the monster trucks into consideration, it is a dangerous job, and health and safety precautions need to be taken at all times. Let us look at the ins and outs of transporting a monster truck.

How Do You Make A Monster Truck Smaller?

To be able to fit a massive truck into a trailer or onto a specially designed low bed, there are certain steps to follow;

After an inspection and safety check, the monster truck is now ready to be transported to its next destination.

Do You Need Special Equipment?

Considering how big most monster trucks are, you definitely need special equipment to disassemble and transport them. Let us look at what you might need;

If you can ever partake in the disassembly and transport of a monster truck, always put safety first.

How Big Are Monster Trucks?

If we go by the name Monster Truck, we already conjure up images of something gigantic and powerful. These trucks are massive but let’s look at the facts;

As you can see by the measurements and weight, monster truck transportation is serious business.

How Often Do Monster Trucks Get Transported?

Monster trucks that participate in shows and extravaganzas typically get transported up to 25 weekends a year. Considering the enormous amount of work that happens behind the scenes, the tons of equipment that gets transported, the logistic involved in this industry is very involved. A seasoned logistics company will ensure that all permits for abnormal size loads are attained way in advance, weigh stations and random inspections also have to be considered.

Sometimes, monster trucks have to get transported overseas, and special cargo planes are hired to show another country. The cost involved in an operation such as this is enormous.

Since monster trucks are a typical American tradition, there is a huge fan base across the world that have been privileged to see a monster truck show. To get the monster trucks to these countries would have been a huge operation, road transportation, permits, spare parts, specialized tools, and all of the road crew.

Countries where monster trucks have been transported to outside of the USA, are;

Can A Monster Truck Drive On The Road?

In Texas, for example, you have a lift law that states you can raise your truck up to 14 feet maximum height; the headlights can be at 54 inches but no less than 24 inches from the ground.

In Florida, you have a lift law that states you can raise your monster truck no to more than 13 feet 6 inches maximum height, have a maximum width of 102 inches, and a length that is not exceeding 40 feet. The lift law also expects you to abide by the vehicle lighting laws and brakes and chassis regulations. If you can do that, you are welcome to drive your monster truck in traffic.

Nothing would be cooler than driving a monster truck down the freeway or to the local mall and be able to find parking where nobody else can. The monster truck is the ultimate symbol of power and mechanical fascination combined in one unit, but it has various limitations, as we now know. Due to the truck’s enormous size, the extreme weight, and the massive tires, it is just not always practical to drive one from one location to another.

Size aside, the fuel cost for methanol alone would be astronomical, and since it powers abnormally sized terra tires, driving in traffic could cause it to break down. We learned that the disassembly and transportation of these giant trucks is a specialized and dangerous event. Many people are involved in the logistics and safety aspects of it.

The next time you are fortunate enough to see a monster truck show live, you will know precisely how they transported, assembled and after the show, cleaned, and disassembled the massive monster truck ready to head off to the next destination.

Are Monster Trucks Gas Or Diesel?

How Do Monster Truck Drivers Drive?

Why Do Monster Trucks Diff Glow?