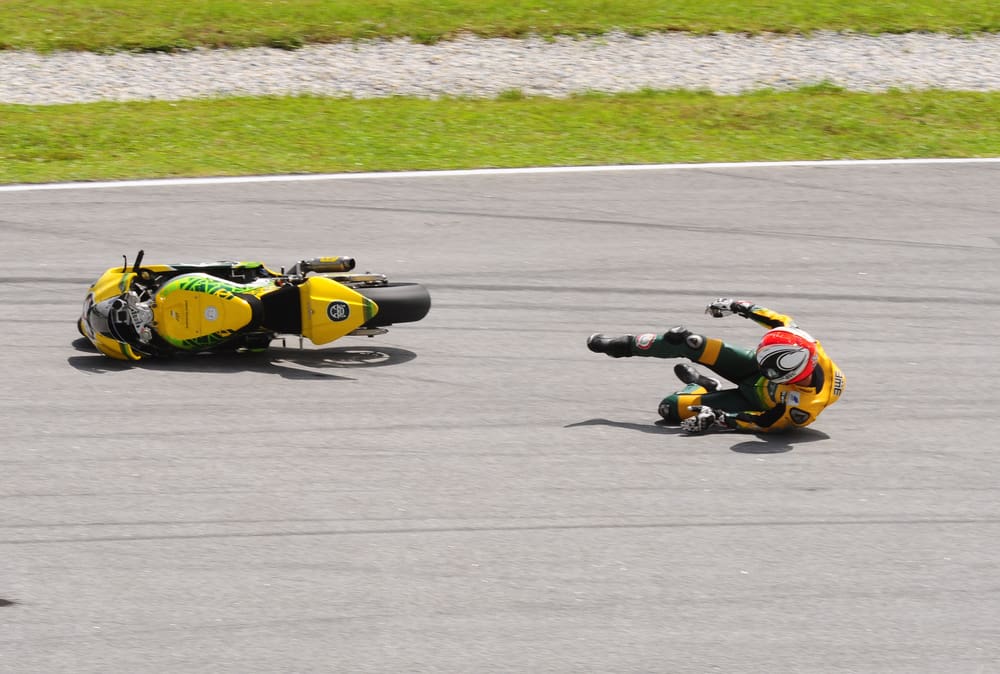 The MotoGP is one of the most exciting sports, whether at the racetrack or remotely from home. Twenty-four state-of-the-art bikes chasing each other around the track at well over 200 miles per hour is enough to get even the fans’ hearts racing. Many fans have wondered, though, just how dangerous MotoGP racing is.

Like in any motorsport, accidents will happen, and the risks are significant when accidents happen at speeds exceeding 200 miles per hour. MotoGP accidents could lead to severe injury or even be fatal, despite the long list of safety measures employed by MotoGP teams.

Over the last decade, the number of severe injuries and fatalities due to MotoGP crashes has decreased significantly. This decrease in fatalities can partially be attributed to improved safety measures employed in MotoGP, many of which have been implemented by the Federation Internationale de Motocyclisme (FIM), the governing body of MotoGP, and are compulsory.

Just How Dangerous is MotoGP?

Over the last decade, from 2012 – 2021, 2394 crashes occurred in MotoGP alone, excluding Moto2 and Moto3 crashes. That is an average of 13.5 crashes per event over the 178 events that took place over the last decade. Surprisingly, very few crashes lead to serious injury, and no fatal crashes have been recorded in MotoGP since 2011, although there were two fatalities in other classes.

Since the MotoGP’s inception in 1949, 87 fatal crashes occurred over all three classes, with only 30 fatalities reported in the MotoGP class (previously known as the 500cc class) in the same period. The number of fatalities has decreased significantly over the years. Only five fatal crashes have occurred since the turn of the century, 2 in MotoGP, 2 in Moto2, and only 1 in Moto3.

The reality is that every time a MotoGP rider goes out on the track, there is a realistic possibility that he may crash, may suffer a severe injury, or even die. Although the odds of serious injury or death are low, it could still happen, as many riders who suffered career-ending injuries in races can attest.

If there is an average of 13.5 crashes per MotoGP event, and one considers that most of these crashes would happen at speeds of close to or exceeding 200 miles per hour, one would wonder why the riders don’t suffer more severe injuries. Several factors contribute, including the riders’ conditioning, the safety equipment, the weather, and the nature of the sport.

All MotoGP riders are professional athletes who train to ensure they are in peak physical condition. As crashing at high speed is a reality in MotoGP, riders don’t only need to withstand the pressure the rapid acceleration of their bikes exerts on their bodies but also to withstand the impact of a crash. Riders also train to handle crashes to decrease the risk of serious injury.

A MotoGP rider’s mental health I also of utmost importance. Every rider takes his own life and the lives of every other rider on the track in his hands every time he races. Riders must act responsibly, stay alert, and be able to think and act quickly for the whole duration of the race. Being properly focused is paramount to ensuring every rider’s safety on the track.

Every MotoGP rider wears protective gear to reduce the risk of serious injury in the event of a crash. Unfortunately, crashes will happen, regardless of how good the rider is and how brilliant the bike’s design is. At speeds higher than 200 miles per hour, even a minor accident could have catastrophic consequences for all involved or even be fatal. All riders will use the following protective gear:

MotoGP is a hazardous sport, and a crash can be catastrophic at speeds of over 200 miles per hour. However, by taking the necessary precautions, ensuring the top physical condition of the riders, and using the array of safety equipment available, teams mitigate the risks to the point where severe injuries and fatal deaths have become a rarity in the sport.

Louis Pretoriushttps://onestopracing.com
Previous article
Why Do MotoGP Riders Wear Nose Strips?
Next article
Do F1 Teams Have Their Own Planes?