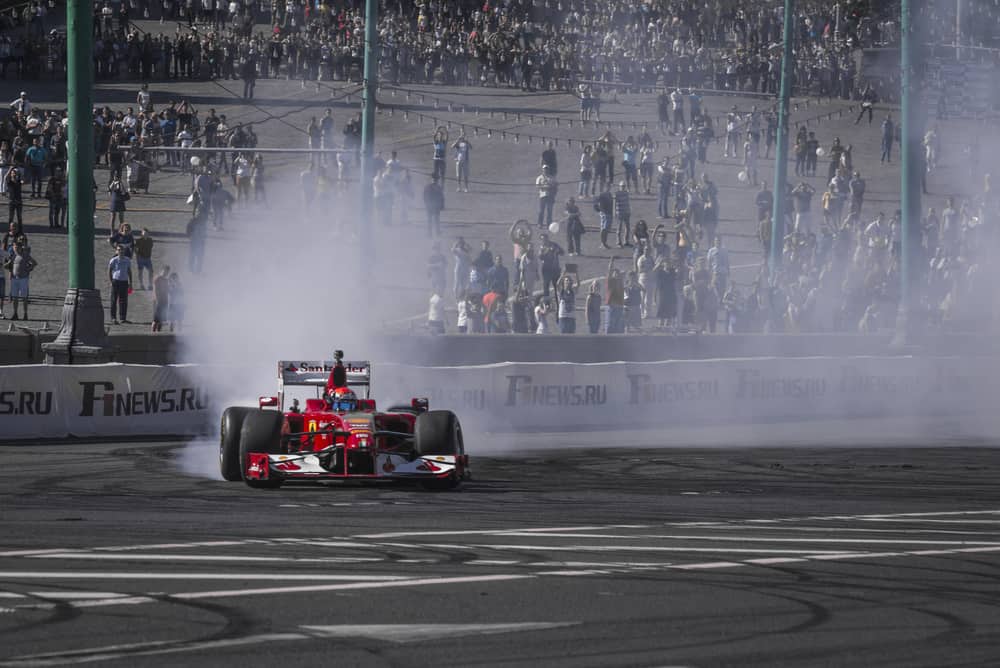 As we all know, Formula One is one of the most extreme forms of motor racing. The cars are specifically designed to reach ridiculous speeds and maneuver around the tracks quickly for hours at a time. But since the engines are under such duress for such long periods, how is it that Formula One cars do not constantly overheat?

The cooling systems installed in Formula One cars are very complex and are not only used to cool the engine. Other parts of the car will heat up during a race, and the cooling systems will most likely prevent any part of the car from overheating. So, fasten your seatbelts and continue to read about how Formula One cars are prevented from overheating.

What Parts Of An F1 Car Are Prone To Overheating?

The most obvious part of a Formula One car that is prone to overheat is the same as any other car: the engine. However, unlike a normal car, a Formula One engine is designed specifically for racing. Therefore, it is under extreme stress for long periods. Normal car engines usually only overheat from a lot of heat outside the car or a poor engine.

For example, the average F1 race is between two and three hours long. F1 engines produce 1000 horsepower (which is extremely high, if you did not know) and the average speed throughout an entire race is roughly 160mph. This is why a Formula One engine is prone to overheating.

The engine is not the only part of a Formula One car that is put through a lot of stress. The brakes within the car’s wheels, the power unit inside the engine, and the car’s gearbox are also victims of overheating. A cooling system is designed to prevent these parts from overheating and uses different elements to cool down each part.

How Does A Formula One Cooling System Work?

Over the years, Formula One engineers get more and more research and data made available to them from watching and analyzing the performances of Formula One cars. This allows them to make changes to the cars that improve performance. However, the use of cooling systems comes at the cost of hindering performance, despite being necessary.

Putting a cooling system in a Formula One car prevents you from inserting other parts into the car that will improve performance while at the same time making the car heavier and less aerodynamic, which increases the amount of drag that the car has to endure.

The main component of a cooling system, and perhaps the easiest to install, is simply allowing the car to transfer heat. The cars have been designed and improved yearly to allow the hot air that the brakes and engine produce to move away and replace the cold air outside the car.

Airflow is, therefore, one of the most vital parts of the design of an F1 car. Not only does it allow you to prevent cars from overheating without too much equipment being added to the car, but it can also increase aerodynamics and prevent as much drag as possible if designed correctly.

However, the cold air that replaces the hot air must also be allowed to escape from the car. If not, the cold air will become hot air and continue to overheat that part of the car. If air is being allowed in but getting trapped, this also increases drag in the car. Ducts near the brakes and the car’s sides allow air to travel through the car without being trapped.

Therefore, simply using the air outside the car is one of the best ways to cool down the car. This is extremely important on parts such as the brakes, as well as the walls and floor of the car. But this is not the case for the engine and the gearbox. These components require more than air, which is one of the biggest reasons the cooling systems slow down the car.

The engine and the gearbox use a water and glycol mixture to get cooled down. This mixture is pumped through the engines and gearboxes, sending the hot air from these components to ducts with cooler air flowing through them. There are also ducts where the engine and gearbox are placed, allowing cooler airflow to stop these components from overheating.

The power unit that is inside an F1 car is designed to produce even more power than the engine can produce and is situated near the engine. This power unit uses the same coolant as the engine and gearbox. Still, it is less prone to overheating than the other components.

Another honorable mention is the turbocharger inside the Formula One engines. A turbo spins at an even faster rate than what happens inside the engine, meaning it can get very hot. However, a turbo needs cool air sent through it to work in the first place. This cool air is instantly achieved by a tool connected to a turbo called an intercooler.

No part should be overheating for a Formula One car to be utilized to its full potential. Overheating often creates faster wear and tear and hinders the performance of other car parts. This is why each Formula One car has a cooling system. The cooling system ensures that each part performs to the best of its abilities by regulating the temperature of components inside.

Parts such as the brakes, the engine, the power unit, the gearbox, and the turbo are prone to overheating. The turbo uses an intercooler to allow cool air to flow through it. The brakes purely use the air from outside the car to cool. In contrast, the engine and gearbox combine a water/glycol mixture and the air outside the car to remain cool throughout the race.

Louis Pretoriushttps://onestopracing.com
Previous article
Do F1 Cars Have A Handbrake?
Next article
How Do MotoGP Riders Turn?