How Do F1 Teams Work? 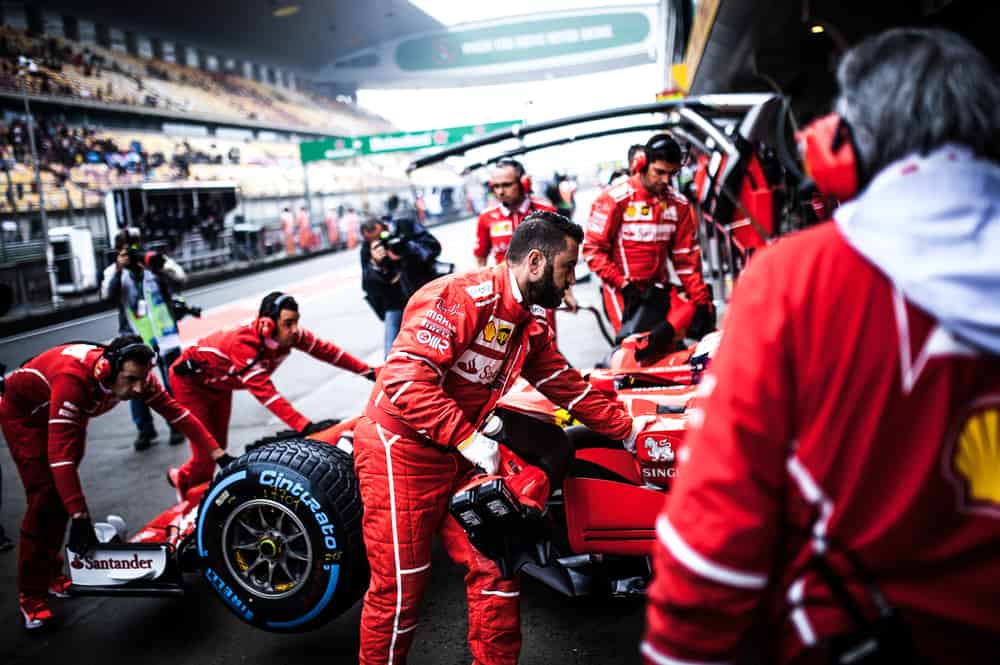 When we see the end of a race, we praise the virtues of the winner, but we ignore that there is a whole team behind the driver who has been working hard and preparing for the Grand Prix for weeks. That makes us ask, how do F1 teams work?

F1 teams have two starting drivers and a couple of reserve drivers. Each team has complex structures with different departments, both in the factory and personnel who attend the races. The number of employees varies between 200 and 1,200 between large teams and smaller teams.

In today’s article, we will reveal the keys to how F1 teams work so that you can know everything about them.

What Is The Structure Of An F1 Team?

F1 teams are not just what we see on television. Each team has a very complex structure with hundreds of employees divided between the factory staff, where all the components are developed, and those who go to the races.

Having a good structure and working method is the key, even better than having the best person in each position because everything must be coordinated.

The number of employees varies greatly from one team to another due to their budgets. Like Ferrari, a team that manufactures all its components is not the same as others that buy many of its parts from suppliers, like Haas, which uses a Ferrari engine.

In the following table, we have the structure of an F1 team with the number of people who work, approximately, in a large team and a small team.

Many of the staff in small teams are in charge of several tasks simultaneously, as they have fewer resources to do the tasks that other people in large teams do.

How Many Workers Of An F1 Team Travel To Each Grand Prix?

Most of the personnel who work in a Formula 1 team do not travel to races, as they stay at the factory—only necessary personnel travel. The people who go to the races are team principals, managers, some assistants (a larger number in bigger teams), some designers, and of course, race mechanics, race engineers, and drivers.

Although the difference in the number of workers from a large team to a small one is abysmal, this is not so noticeable in races, as more or less the same number of people usually go. In a large team, about 88 people travel while about 54 do so in small teams. The rest stay at home.

In 2018, Autosport magazine published the budgets, revenues, and the number of employees of each F1 team 2017. In the following table, they are ordered according to how they finished in the championship.

Mercedes, Ferrari, and Renault have more employees dedicated to engines because they are the engine suppliers to the rest of the teams (McLaren used Honda at the time, but the Japanese developed the engine and then worked together with the team).

From the table, we can conclude that the team that invests the most or has the most people ends up winning or vice versa.

How Do F1 Teams Transport Their Goods?

Formula 1 is one of the largest global sporting events. More than 1,000 tons of equipment, worth millions of dollars, is transported across the world to every race, including bodywork, technology, tools and machinery, as well as catering facilities, meeting spaces, and everything necessary for optimal work during the weekend, but how do they do it?

The truth is that it is a logistical nightmare. A combination of three modes of transport is used to transport equipment, infrastructures, and personnel: airways, roadways, and waterways.

As all teams are based in Europe, logistics across the continent are relatively easy and are carried out by the road. Each team uses dozens of trucks for cars and all the necessary. Because the cost of shipping by truck is so comparatively low to shipping by plane, teams bring whole buildings with them to the European races, the so-called motorhomes, where they have plenty of areas such as offices, bars, and restaurants.

In races outside of Europe, the tracks provide facilities such as the motorhome, so they are not as fancy as the teams’. In the following video, we have Valtteri Bottas taking a tour of the Mercedes motorhome:

Things get more difficult for international races, known as “flyaway” races, as they require more preparation. For these races, teams pack up five sets of shipping containers a few months before the start of the season, in January, destined to the first five flyways races (each one to one different destination).

They are sent by sea as it is massively less expensive than sending them by plane and it is more sustainable. They take a long time to arrive, that’s why they ship it months before. Shipping containers transport 200 tons of race equipment, classified as “non-critical”: jacks, trolleys, kitchen equipment, hospitality items, and fan-zone items.

When these races are over, each set is sent to another flyaway race. This is what destinations of each set were like before the covid-19 pandemic:

Equipment classified as “critical” travels with teams to each track. These are the race equipment: pit stop equipment, computer servers, secure data links, and car components. They are sent by cargo plane chartered by Formula One Management (FOM), in partnership with DHL.

Things get much more difficult and complex when there are back-to-back races, as there is less time for transportation, and also on city circuits like Monaco or Singapore, as open roads provide their logistical challenges.

What Do Teams Do On The Grid?

The moments before the start of a race are also very tense, and the teams have to coordinate very well.

About an hour before the race start, the mechanics use grid trolleys to get the garage to the grid. Drivers take an isolation lap to get a feeling of the car and brief the team if something needs to be changed. Then, around fifty minutes before the start, the mechanics go to the grid while engineers sit on the pit wall, bringing everything they need while the car takes another lap.

At approximately thirty-five minutes before the start, cars arrive at the back of the grid, so the mechanics eject them up and put them on carbon wheel boards to bring them to their correct position. Every mechanic has the same role as in the garage, and they are in charge of keeping the engine and brakes at the correct temperature using fans for the first two and blankets for the tires. An engineer goes through the steering wheel, collecting the switches and requirements for a start.

Around half an hour before the race, some engineers have a last-minute strategy check with the driver while the front wing flap adjustings are checked. With twenty-five minutes remaining, engineers ask for an engine cranking, that is, to move the water through the engine or fully start it to check its correct operation.

Fifteen minutes before the race start, the national anthem of the host country plays, and with twelve minutes remaining, the driver gets in the car. Then, the tires are adjusted well, and all the equipment begins to be collected. Thirty seconds before the race start, the tires are removed from the blanket, and the mechanics head to the garage during the formation lap.

Most of the guys in the grid formation are involved in the pit stops, so they need to be ready if there is an incident during the first laps.

As we have seen, the structure and operation of a Formula 1 team are very complex. For everything to go well, numerous areas and groups of people have to be coordinated, so it is admirable that every race weekend normally everything goes fine.

When you analyze how an F1 team works and its logistics, you realize how complex F1 is and that when we watch the races, we are not aware of all the work behind it, we only see a small part of what there is.