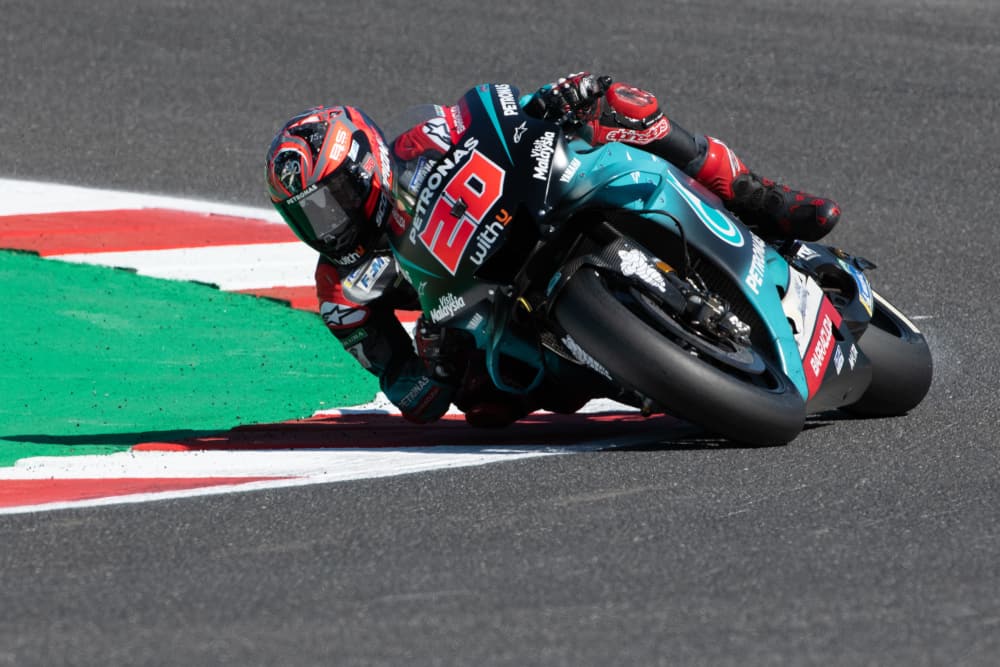 MotoGP is snapping at the heels of Formula One, not only in viewership numbers but also with the levels of excitement that this motor racing format achieves. The racing starts from the first practice session before the main event and continues through qualifying until Sunday’s main race event.

The system of qualifying for the main MotoGP race is strictly controlled and designed to ensure that the most competitive, viewer-enticing action is experienced in the main race.

The process required for a rider to qualify for the main races includes several practice sessions, followed by the qualifying events, culminating in the riders who qualify on the starting grid for the main race.

The stages include the following sessions:

Held over the Friday and Saturday preceding the main race held on Sunday, a race weekend allows the riders to participate in four free practice sessions.

The lap time set by the fastest rider becomes the standard by which all other riders are judged.

It is because for a rider to qualify to participate in the qualifying sessions, and the lap time has to be no slower than 105% (previously, this was 107%) of the fastest rider.

Effectively this means that unless the riders can match the lap times to within 5% of the fastest rider, they will not be allowed to participate in the qualifying sessions, let alone ensure a spot on the starting grid.

It ensures that the pack stays tightly together in the main race and means a lot of excitement with regular overtaking as each bike exercises its different strengths on the different portions of the track.

All the riders participate in the free practice sessions FP1, Fp2, and FP3, each lasting for forty-five minutes.

As indicated previously, the rider who cannot manage a lap time of less than 105% of the fastest time recorded is eliminated from participating in the qualifying sessions.

The fastest ten riders who beat the 105% circuit time limit automatically qualify for qualifying session two on Saturday afternoon. This rule prevents slower riders, which may impede the race from entering on Sunday.

There are only two situations where the “105%” rule can be overruled.

The free practice session four has no bearing on qualifying and final grid positions; instead, the teams use this thirty-minute session for final setup and testing.

Of the twenty four riders on the 2022 MotoGP circuit, the ten fastest from FP1, FP2, and FP3 automatically qualify to go through to the Qualifying session two (Q2).

Assuming the other fourteen riders met the requirements of the 105% rule, they are left to battle it out in Qualifying session one (Q1).

If a substitute rider was not required to meet the standards of the 105% rule in free practice, this is applied to that rider in Q1, where they must be no slower than 105% of the fastest time in Q1.

Each qualifying session lasts for fifteen minutes, and the two fastest riders from Q1 qualify to participate in Q1.

The remaining twelve riders in Q1 are placed in grid positions thirteen through to twenty four dependent on their lap times.

Once Q1 has been completed, there is a fifteen-minute waiting period before the commencement of Q2. It is easily managed for the top ten teams because they have had the whole time between FP4 and Q2 to prepare.

The top two riders who qualified out of Q1 into Q2 have only fifteen minutes to fuel their bike up, check it over, and for the rider to orientate themselves to the next challenge.

The twelve riders (ten from the free practice session and the two who qualified out of Q1) who participate in Q2 are guaranteed a place in the top twelve places on the grid.

The top twelve spaces on the grid are determined by the lap time achieved in Q2, with the fastest rider achieving pole position and the rest of the field following as determined by their speeds.

Unlike Formula One, the first three free practice sessions are used to determine who gets to participate in the qualifying session and those riders who can miss out in Q1 and qualify immediately for the Q2 session.

This process makes the six (FP1 – 4 and Q1 – 2)  preparation sessions as exciting as the main race.

Louis Pretoriushttps://onestopracing.com
Previous article
Why Is BMW Not In MotoGP?
Next article
How Many Bikes Are In A MotoGP Race?