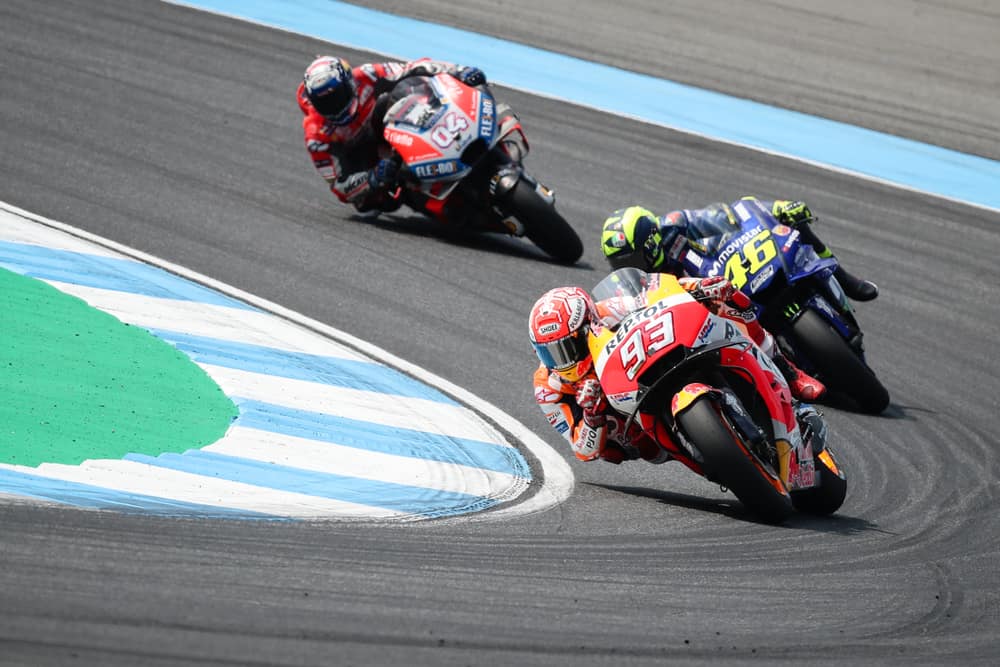 Millions of international fans are currently following the 74th season of MotoGP, which is not surprising, as there are few things as exhilarating to watch. The sound of 24 1000cc engines running at high revolutions, chasing each other around a track. And then there are those iconic low-leaning turns. But how do MotoGP riders turn their bikes?

Unlike motor cars, where the car would go in the direction you turn the steering wheel, motorbikes lean into the turn. All motorbikes use a counter-steering technique, and MotoGP bikes are no exception. Counter-steering is just more apparent at high speed.

Of course, MotoGP riders would be unable to make such low leaning turns without several other factors being present. Road conditions, the condition of the tires, and the weather all play a crucial role. More important, though, is that the rider needs to be in the top physical condition and that he understands the science behind making those iconic turns.

How Does A MotoGP Rider Turn His Bike?

It takes an exceptional talent to ride a MotoGP bike, especially to negotiate those turns while leaning so low that the bike’s footpegs almost touch the ground. Indeed, the smoothness and cleanness of the road surface and the super-sticky tires make it easier, but negotiating those turns are no easy feat. Riders use scientific methods to turn the bikes.

All motorcycles use a technique called counter-steering to turn, and MotoGP bikes are no exception. All vehicles with wheels in a straight line use this technique, even bicycles, but it becomes more visible at high speeds. Counter-steering means the front wheel points in the opposite direction than the bike is turning, while the bike leans into the turn.

Except for counter-steering, most MotoGP riders also hang off the bike when they negotiate turns. By hanging off their bikes around corners, riders move the bike’s center of gravity into the corner, enabling them to go around corners faster. Hanging off also reduces the bike’s lean angle, effectively leaving more room for the foot pegs and reducing the risk of an accident.

Why Do MotoGP Riders Lean Into Turns?

Many things attract millions of fans to the MotoGP – the sound of the engines, the incredibly high speeds, and those iconic low-leaning turns. But why do the riders lie so low in the turns? Are they just trying to show off, or is it necessary? The truth is that these low-leaning turns are an essential part of motorcycle racing.

Ever driven a car on a highway, cornering at high speed, and felt your body pulling towards the outside of the turn? This applies to motorcycles too. Cornering at high speed causes a pull on the highest part of the motorcycle towards the outside of the turn. This could rip the rider off the bike. The faster you take the turn, the stronger this pull will be.

Leaning into the turn is the rider’s way of countering the forces that would rip him off the bike. The only time that a motorcycle can make a turn without leaning into it, at least slightly, is if it is moving very slowly. The faster the bike goes, the greater the forces would be trying to rip the rider off the bike, and the lower the motorbike would have to lean for this not to happen.

Leaning so low could be extremely dangerous, though. Not only is it a risk that the tires might lose traction and skid off the track, but if they lean too low, the bike might hit the ground, leading to a potentially serious accident. That is why riders often hang off their bikes while going around turns, as this marginally reduces the bike’s lean-angle.

Is It Dangerous For MotoGP Riders To Lean Low Into Turns?

The objective of any MotoGP rider is to win the race, being the fastest man on the track. To be the fastest means leaning low into turns, or the rider will be flung off the bike and lose the race in any case. However, the faster they go, the lower they need to lean into corners, increasing the risk of the tires losing traction or an accident because they lean too low.

MotoGP teams and riders try to mitigate the risks by taking the necessary safety precautions, the first of which starts with the rider himself. The rider must be super fit and in top physical condition to reduce the risk of a crash or fall. The forces that nature exerts on the rider when traveling at over 200 miles per hour will be extreme, and their bodies need to be able to handle this.

Mentally, riders also need to be in top shape. Not only is every rider taking his own life in his hands out on the track, but if his head isn’t in the race, he also puts the lives of 23 other riders at risk. Riders must act responsibly, stay alert, and be able to think and act quickly for the whole duration of the race. Being properly focused is paramount to being a successful MotoGP rider.

The next area of preventive measures comes in with the bikes themselves. MotoGP bikes are customized to suit each rider, within the laws of the sport, that is. Bikes get fitted with state-of-the-art technology in every aspect, including braking and traction control. The tires used on these bikes provide superior traction at high speeds and around corners.

Lastly, every MotoGP rider wears protective gear to reduce the risk of serious injury in the event of a crash. Unfortunately, crashes will happen, regardless of how good the rider is and how brilliant the bike’s design is. At speeds higher than 200 miles per hour, even a minor accident could have catastrophic consequences for all involved or even be fatal.

The protective gear starts with the racing suit, custom designed to offer the perfect fit for each rider. The materials used in these suits offer riders the highest possible level of protection. The racing suits include shields in areas like the knees, elbows, and shoulders that might be hard hit in an accident and incorporate an airbag inside the racing suit for further protection.

Helmets used by MotoGP riders must conform to the highest international safety standards before the governing body even considers them. These helmets are then subjected to further testing by the governing body to ensure only the very highest level of protection. Not only is the helmet’s outer shell important, but also the visor and the inner padding.

MotoGP bikes, like all motorbikes, need to lean into turns to counteract the forces that would otherwise try to pull the rider off the bike. The higher the bike’s speed, the more it would have to lean. Except for leaning, MotoGP riders also use the counter-steering technique, pointing the front wheel in the opposite direction of the turn and hanging off their bikes around turns.

Louis Pretoriushttps://onestopracing.com
Previous article
How Do F1 Cars Not Overheat?
Next article
What Do MotoGP Riders Have On Their Back?