How Fast Are F1 Cars? 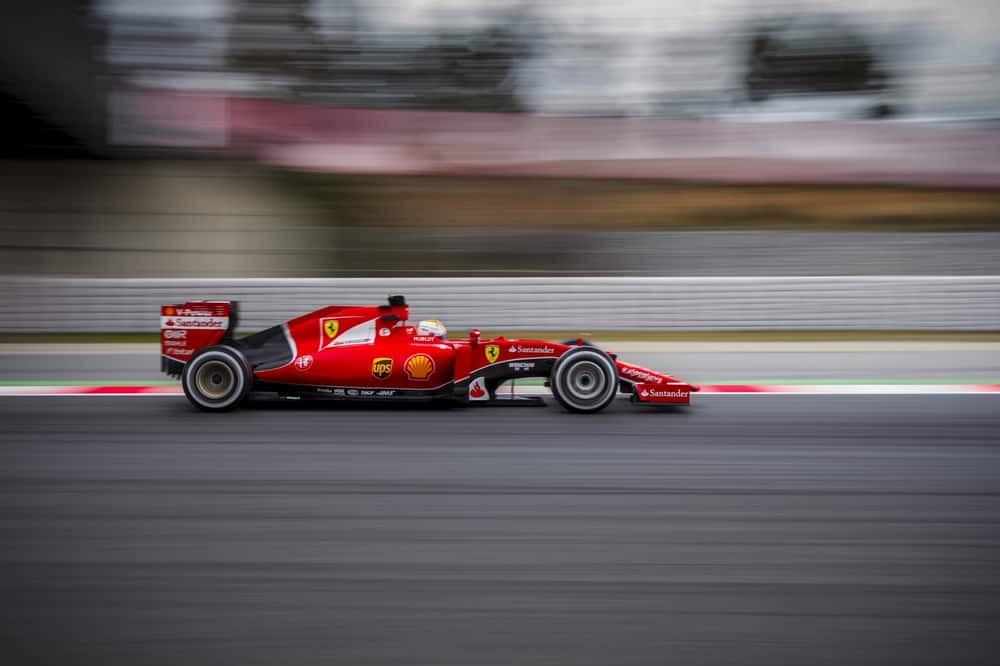 Formula 1 is among the most widely popular motorsports in the world and is widely regarded as the most intense, the most prestigious, the most exciting, and the most high-end motorsport there is. The cars that are used in this ,otorsport are cutting-edge and are some of the fastest vehicles in the world, but how fast are these cars in reality?

Formula 1 cars are incredibly fast around a track, but they are not considered to be the fastest cars in a straight line. These are only two of the factors to consider when discussing the speed of an F1 car. Let’s take the time to go in-depth into the true speed of F1 cars in every aspect.

How Fast Are F1 Cars?

Formula 1 cars are among the fastest cars ever built. These cars are not primarily built for stright0line speed, but rather for a combination of performance and racing efficiency. F1 cars are not built to go fast in a straight line but rather built to be as fast as possible around a racing circuit.

The top speed of modern Formula 1 cars is a little more complicated to determine than you may think. The top speed of the cars in F1 compared to the top race speeds and the top cornering speeds are very different.

The technical top speed of F1 cars is 360KPH (roughly 223MPH). However, the fastest race speed of an F1 recording during an official Grand Race was 397KPH (246MPH).

This means that Formula 1 cars routinely race faster than their official top speeds due to the fact that under racing conditions, the drivers are pushing harder, can make use of the slipstreams, and have aerodynamic advantages such as DRS working to increase their on-track speeds.

The cornering speeds of Formula 1 cars are where these vehicles really shine. These cars are capable of cornering at speeds of up to 300KPH (186MPH), which is significantly higher than almost all other cars in motorsport.

These speeds mean that F1 cars may not technically be the fastest cars in motorsport, but they are the fastest and most efficient cars around a racetrack in all of motorsport.

With that in mind, let’s take a closer look at some of the other aspects of Formula 1 car speed, to truly understand the speeds that these cars are capable of.

How Fast Are F1 Cars Around A Track?

Formula 1 cars are designed for racing around Grand Prix circuits as quickly as possible. For this reason, it is important to consider how fast Formula 1 cars are around a track, rather than only considering how fast the vehicles are in a straight line.

The aerodynamic design of F1 cars combined with sophisticated hybrid engines, efficient performance components, and the best tires in the business means that these cars get around racetracks faster than any other vehicle in motorsport, including Moto GP bikes which have a significantly better power to weight ratio.

Every F1 racetrack is different and has different lengths, so for our purposes, we will use the longest F1 track on the 2021 calendar as a distance reference. This track is Spa-Francorchamps which is the host of the Belgian Grand Prix.

This circuit is exactly 7.004 kilometers (4.352 miles) long, making it longer than any other track on the calendar. Formula 1 cars are able to race around this track in average lap times of less than 2 minutes.

The fastest F1 lap time set at this racetrack was during the 2018 Belgian Grand Prix, which saw Valtteri Bottas set a time of 1:46.286. This lap time has never been matched and proves that F1 cars travel at immense speeds around F1 tracks.

How Fast Are F1 Cars In A Straight Line?

The straight-line speed of a Formula 1 car is only limited by the car’s aerodynamics and power-weight ratio. These cars are incredibly fast around a track but are less quick when considering outright speed.

F1 cars are capable of straight-line speeds in excess of 360KPH (223MPH). This is very impressive considering the size of the modern F1 cars, but there are records of Formula 1 cars being pushed to incredible speeds outside of official races.

Some F1 cars have been recorded traveling at speeds faster than 400KPH (more than 248MPH). These speeds are never seen during F1 races but given enough space and the right driver in the right conditions, and these cars are capable of much more speed than many people realize.

Still, these cars are not the fastest in a straight in all of motorsport, but they place well in the top sector of fastest cars in motorsport.

How Fast Do F1 Cars Accelerate?

Reduced acceleration times also help to preserve the tires and other components of these high-performance vehicles to better improve their racing abilities throughout the race.

Formula 1 cars accelerate from 0 – 100KPH (62MPH) in roughly 2.6 seconds. This is a very quick time considering the mechanics and weight of these cars, but it is still not the fastest in motorsport.

These cars are very quick off the line compared to many other racecars, and the acceleration speeds of F1 cars are highly impressive. Watching an F1 race start is always an exhilarating experience.

How Fast Are Modern Vs. Old F1 Cars?

Formula 1 has been going since the 1950s, and every racing year has brought along with it a new breed of F1 cars. The cars that were raced in F1 history were famously more powerful than Formula 1 cars of the current season, which leaves F1 fans wondering if old F1 cars are faster than modern F1 cars?

In F1, the engines are not everything. The way the car is shaped and built, combined with the performance components of the car, all play a crucial role in how fast the car is on track.

Modern Formula 1 cars employ a myriad of modern technology, materials, and components that significantly increase their speed and racing performance.

The modern cars that are used in F1 2021 are the fastest cars that the sport has ever seen, regardless of engine size. These cars are the pinnacle of modern motorsport vehicles.

Which Cars Are Faster Than F1 Cars?

We have established that there are no cars faster than those in Formula 1 when navigating a race circuit, but there are several cars that beat the F1 car in outright straight-line speed.

Regarding acceleration, there are several racecars that outperform the F1 racer, including Hypercars, Formula E cars, and even Moto GP racing bikes.

However, there is only one type of racecar that beats F1 cars in top speed. Only IndyCars are faster than Formula 1 cars regarding top speed, but every other significant type of race car in motorsport has a slower top speed than F1 cars.

The top speed of an F1 car is technically 360KPH (223MPH), but the IndyCar is capable of speeds higher than 380KPH (236MPH). Both of these cars are capable of faster speeds under ideal race conditions, but these are the technical top speeds of both cars.

This means that IndyCar racers are faster at the top end than F1 cars are, but they are still no match for F1 cars around the track. IndyCars have smaller engines, less power, and more weight than F1 cars do, but their improved aerodynamics account for their higher top speed compared to F1 cars.

What Makes F1 Cars So Fast?

Formula 1 engines are very efficient hybrid engines that are small but incredibly powerful. These engines produce more than 1000HP, and the cars weigh less than 800kg. This results in a very impressive power to weight ratio.

The next biggest factor in F1 car speed is aerodynamics. These cars are built for maximum handling performance, and a large portion of this comes from their shape. F1 cars are designed with significant downforce that allows them to stick low to the ground and corner incredibly quickly without leaving the surface of the road.

Formula 1 cars are redesigned with handling in mind, which includes the aerodynamics of the vehicle, but also includes the tires and suspension system of the cars. These are some of the most sophisticated systems in the world, and tires that are used on F1 cars are designed for super-fast racing.

All of these factors combined with high-performance transmissions systems and the best drivers in the world to operate the cars result in the most high-performance vehicles that motorsport has ever seen.

Are All F1 Cars As Fast As Each Other?

Formula 1 cars are the most high-performance vehicles in motorsport today, but that is not to stay that every F1 car is equal. Every year there are 20 F1 cars that fill the grid, but not all of them are as fast as one another.

The cars that are used in Formula 1 are constructed by the teams that race them. This means that the bigger, more well-established, more well-funded teams have better opportunities, technologies, and skills at their disposal for constructing their racecar to make it as fast as possible.

Teams such as Mercedes, Red Bull, and Ferrari have very big budgets and many resources and skilled personal available to them. Smaller teams such as Williams and Haas have less to work with and so usually have inferior cars.

This is apparent in F1 qualifying sessions. The smaller teams that employ world championship drivers who are clearly capable of very fast driving are not able to keep up with the bigger teams in the sport simply because they cannot build cars that have the same performance.

There are regulations in F1 that are meant to mitigate this issue, but the truth is that not all F1 cars are built equal, and there are some cars that are just faster than all the others.

The high-speed capabilities of Formula 1 cars are unparalleled in motorsport. There are no cars faster around a track than F1 cars, even if they may be quicker off the line or have a higher overall top speed.

The fact that these cars are able to traverse the most compacted and challenging racetracks in the world as quickly as they do is proof of the incredible speed that these vehicles are capable of.

If you are still dubious about the speed that these cars can do, get yourself to the closest F1 Grand Prix next year and sit as close to the track as you can for some first-hand F1 speed experience.

Louis Pretoriushttps://onestopracing.com
Previous articleHow Many Tires Can F1 Use?
Next articleHow Long Do F1 Engines Last?