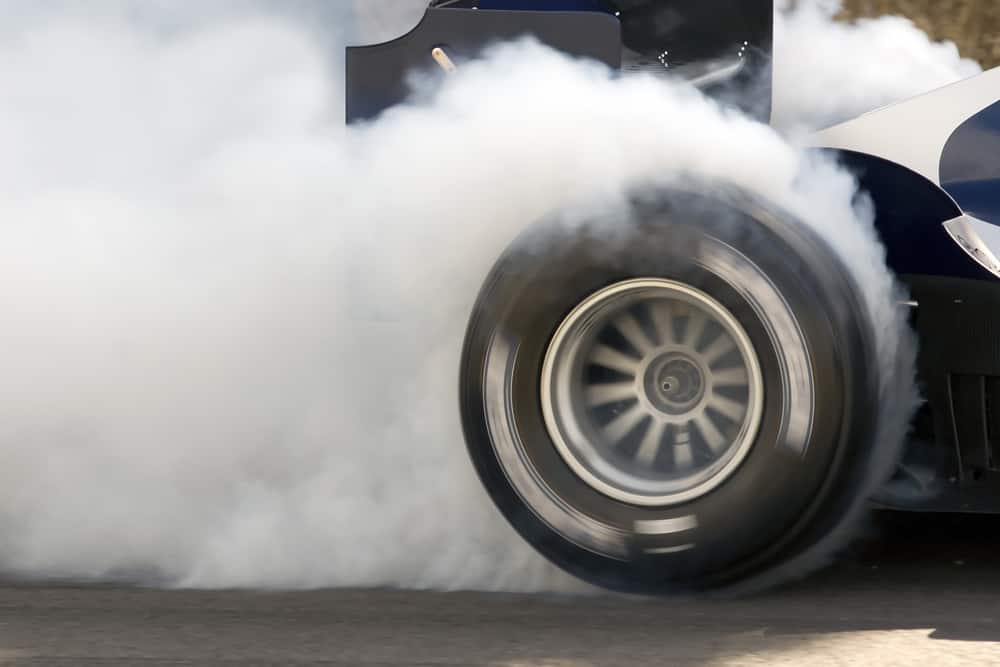 Everything about F1 is extreme, including the size budgets needed to develop and race the cars, the speeds they are capable of, the safety precautions, the efficiencies of the pit crews, and so on. The heat F1 tires normally operate under is equally extreme.

Although looking at a used F1 tire, it may seem to have overheated by a large degree and ended up “boiling,” this is, in fact, a very rare event, and what looks like a tire that has boiled is the effects of blistering and graining.

What Are The Rules Concerning Formula 1 Tires?

Formula 1 tires are made by Pirelli and are common to all the formula one team.

The dry weather compounds are designated as

Each racing track will only use three of the five dry-weather compounds and will be chosen based on their suitability for the specific track conditions. In the race, the three compounds are referred to as.

In one country, the tires may be designated as follows.

Whereas at another track, they may be designated

Using this example, a C1 tire may be designated the “hard” compound at one track and the soft compound at another.

How Are Formula 1 Tires Made?

Interestingly only 10% of formula one tires are made up of rubber.

The other materials used in Formula One tires are.

The base of the tire consists of steel bead wire encased composite materials, and these two materials form the foundation of the tire.

These materials are further covered by various materials, which ultimately form the tire’s carcass.

A tread belt is added over the carcass, and this is the outer layer which is the only visible part of the tire construction.

As the tire heats up with use, the polymers listed above start to degrade, and the rubber begins to deform internally. Most of the rubber will spring back to its original shape, but some chemical bonds break apart or deform permanently.

The result is that over a heat cycle, the consistency of the tire changes, and it becomes harder and less adhesive, offering a reduced grip.

When the tire has been heated up, it becomes more viscous and the soft “almost melted” surface of the tire sticks to the track surface.

Several terms are unique to the world of motor racing.

If the inside of the tire heats up faster than the outside, an air pocket will develop, which will expand and eventually burst out, removing part of the tread belt.

Graining can occur if the tire’s surface temperature has not been raised to the optimal range.

It happens when the outer surface of the rubber becomes a lot hotter than the inner parts of the tire. The tire’s hot “melty” surface will become deformed and wear under high cornering loads.

When a car is cornering at high speeds, strong lateral loads are imposed, which pulls on the soft rubber, and the rubber deforms in waves, or little “peaks” and “valleys”  on the surface.

Eventually, the peaks start to break off, and they fall back onto the surface tread because they are exceptionally hot (melted).

Over time the worn parts of the tread develop a grainy texture.

The graining prevents the tread belt from contacting the track, and therefore there is a reduction of grip.

Not all of the “peaks” of the tire which are torn off end up on the tire to grain it.

Many of the pieces end up on the track, known as marbles. They tend to fall off just to the edge of the racing line.

If a driver does not stay on the racing line, just like when tire grains, there will be a significant loss of grip, impacting the track times.

It is not always bad to have rubber left on the track by the formula one cars, but rather the consistency of that rubber.

Unlike marbles created by a tire wearing badly, under normal circumstances, tires do lay down a more uniform layer of rubber. As the cars continue to lap the circuit and drive over the same spots, they increase the thickness of the rubber laid down.

This rubber is worn off the tires when they are very hot, and so in its melted state, it adheres to the track and the layers below it.

This layer of rubber increases the car’s grip and improves traction.

As the layer of rubber on the track provides a cushioning effect for the tires, driving over it reduces the tire wear.

F1 tires operate at the limit of their capabilities and are often the difference between first place and the cars which finish behind. They work at extreme temperatures and produce prodigious amounts of grip.

While they don’t “boil,” a grainy or blistered tire surface will give the impression that they have melted and boiled.

Louis Pretoriushttps://onestopracing.com
Previous articleHow Many Times Can You Use DRS In F1?
Next articleHow To Become A Formula 1 Marshal