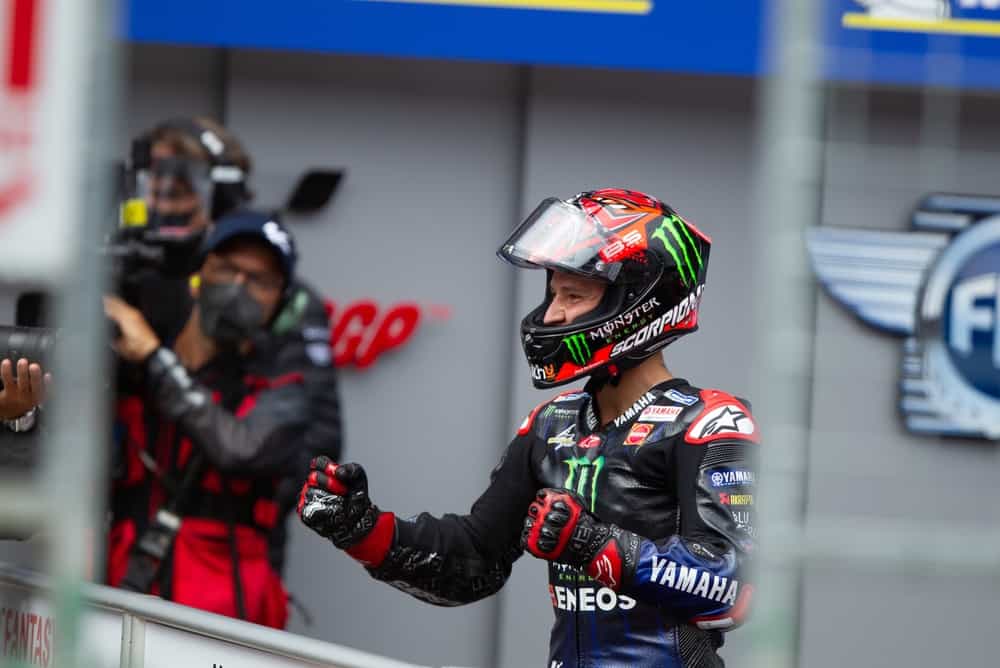 During a  MotoGP race with bikes, speed down the straights at over 200 mph and sharply brake down to 70 mph for the corners, which they take while leaning at angles of 65 degrees or more. To ride a MotoGP bike around one of the twenty circuits on a typical annual race calendar requires levels of fitness and skill unique to  MotoGP and F1 drivers.

A MotoGP bike has many more race controls, a racing gear shift, and a very sensitive and overly delicate to control chassis. A MotoGP rider has said that a person transitioning from a road bike to a MotoGP bike without training can expect a very short trip, some of which will be airborne!

Not only do the riders have to have the exceptional skill to control and race MotoGP at the levels they do, but simultaneously they have to consider the settings on nine other controls not normally found on road-going motorbikes.

MotoGP Bikes Are Designed To Be Ridden By The Best

They may not seem to be very different to ride than other motorcycles, but the reality is that while they share many characteristics of other motorbikes, modern MotoGP bikes require a level of skill, mental acuity, and fitness very different from road-going bikes.

Not only does the rider have the ability to make changes to the MotoGP bikes setup while on track, but they also have to cope with massive force changes in their bodies while retaining a complete understanding of the tactical situation, while keeping the strategic picture and constantly plan at the front of their minds.

While most motorbike riders only have to concentrate on the road ahead, ensuring that their speed is appropriate for the circumstances, and then brake, accelerate, change gear and steer as required, a MotoGP rider is required to control many more functions.

They do this while racing at these incredible speeds, sometimes traveling inches away from other riders.

Through this, the only connection between the bike and track are two credit card-sized patches between the tires and surface.

It implies that MotoGP riders are not the average motorbike rider who uses the machine for their daily commute.

What Additional Controls Does A MotoGP Bike Have?

In addition to the normal controls on a motorbike, such as the following.

Different controls, levers, and buttons on a MotoGP bike are very different from the standard controls found on road bikes or even top-level sports bikes.

Although modern sports bikes have traction control and different fuel maps which the rider can adjust while traveling, they are nearly as sophisticated as the systems in MotoGP.

MotoGP, bike riders can adjust the fueling and ignition parameters independently of each other and provide the rider with launch control, pit lane limiters, and even engine braking going into a corner.

The rules have few requirements that dictate the level of technological intervention.

With these restrictions in mind, MotoGP bikes include the following additional controls.

On many MotoGP bikes, there is an additional lever under the clutch lever, which operates the rear brake, which works with the regular brake pedal under the rider’s right foot.

The hand rear brake lever was first introduced by Mick Doohan, a rider who suffered an appalling accident in the 1990s.

He lost full control of his right foot and could no longer operate the rear brake pedal, so he added a hand brake next to the clutch.

It has been adopted by several riders who appreciate being able to control the brakes and lean off their bikes so far in left-hand corners that their foot isn’t near the pedal, so they cannot access the rear brake.

On many bikes, there is a knurled plastic adjuster knob above the left-hand switch block (the unique MotoGP buttons described in this article).

This control is connected to a cable routed across the top clamp to the front brake master cylinder and gives the rider to adjust the ‘feel’ of the front brake while racing and compensates for brake pad wear, changes in brake fluid temperature, and the brake sensitivity.

There have been several iterations of ride height devices.

The front wheel hole shot system reduces the bike’s front “lean” angle, making it less likely to rear up in a wheelie at the start of the race.

On most bikes, this is a “one-off” control; it involves a pin inserted into the shock and holding it down. At the start, the pin is removed and cannot be reinserted during the race.

In 2022 Ducati has been testing a “repeatable” front ride height device that can be re-engaged during the race, making acceleration out of corners more controllable.

These devices have been banned for the 2023 season because they are more automated and could potentially cause control difficulties.

Rear ride height is designed to lower the bike’s center of gravity, reducing the potential of wheeling and maintaining better control in the corner.

The green button controls the ability of the engine to decelerate the bike as it approaches a corner, thereby reducing stress and heat on the brakes.

This control can also control the rear wheel sliding out.

This device works with the hole shot and rear wheel ride height device to keep the wheel from slipping as acceleration is applied.

The device controls the power to the rear wheel and is used to stop the front wheel from lifting during acceleration.

Because it activates by reducing the power to the rear wheel and therefore reduces the acceleration, it is important that the rider can control how this device intervenes.

This adjustment controls the fuel flow and, particularly on the longer tracks, is used to reduce gas consumption, ensuring the rider gets to the end of the race.

Pressing this button automatically reduces the speed to the maximum pit lane speed.

Pressing this button stops the engine.

In short, riding a MotoGP bike under normal testing conditions takes a great degree of skill. When this is added to the pressures of a race where the riders compete against nineteen other MotoGP bikes around a twisting track, very few professional riders have the skill set required.