How Long Do Red Flags Last In F1? 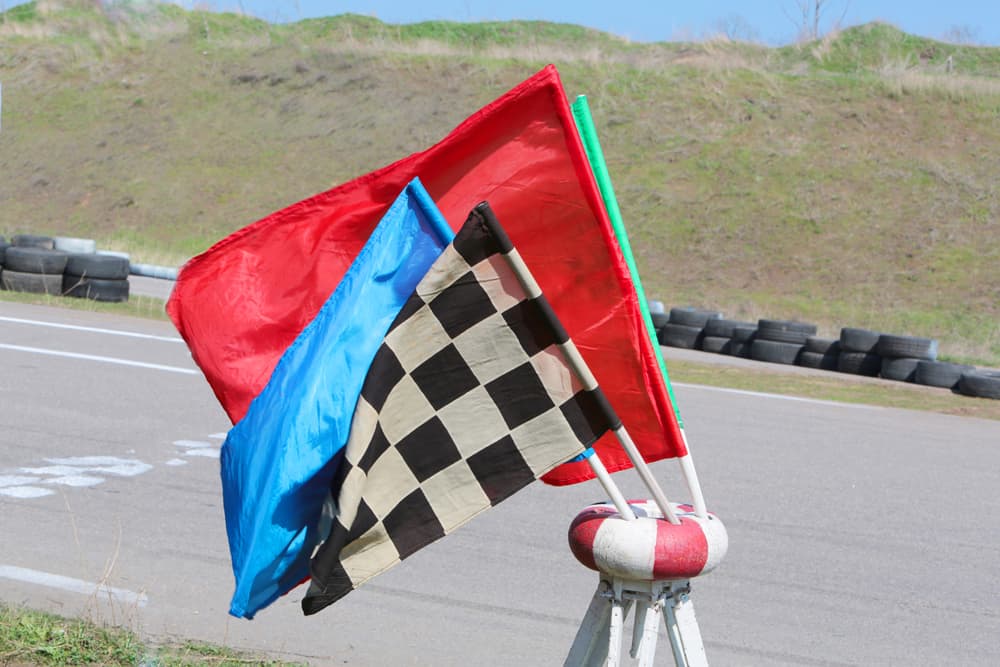 Red flags are displayed in Formula 1 to stop the session when a major accident has occurred, or the track conditions are very dangerous and difficult to drive, but how long do they last?

Red flags last until track conditions are optimal for racing again. However, no race can last more than two hours in a three-hour window, which means that a red flag must be less than three hours long to allow time for the race itself.

Red flags are not very common, and when they do occur, TV commentators always try to give an approximation of how long they will last so that viewers will know, as it is a bit confusing, so let’s clear everything up here.

Why Are There Red Flags In F1?

Red flags in F1 are a way to avoid unnecessary risks for drivers, marshals, and spectators. They are displayed to stop the session mainly due to two reasons:

During the red flag period, drivers remain in the pit lane, and mechanics can repair certain things on the car. Once the red flag is over, the race can be resumed behind the Safety Car, that is, with a launched start, or by means of a standing start.

If you want to know more about red flags and the other types of flags that are in F1, check this article in which we explain everything in more detail.

How Long Do Red Flags last In F1?

The duration of a red flag depends on when the marshals clean the track and repair the barriers if necessary, and in the event of adverse weather conditions until the weather and track conditions improve and it becomes safer to race.

As for qualifying sessions, there is no time limit, so when there is a red flag, the clock stops, and the session is resumed once it is over.

This is different in free practice sessions. When there is a red flag, the clock does not stop, so when the session is resumed, there is much less time left than when the red flag was displayed. This has led to complaints from some teams, as precious time for test improvements and set-ups before qualifying is wasted.

What Happens When An F1 Race Cannot Be Resumed?

Sometimes, due to the severity of an accident or persistent adverse track conditions, the limit of the three-hour window is reached, and the race cannot be resumed.

In accordance with article 6.5 of the 2021 F1 Sporting Regulations, if a race is suspended and cannot be resumed:

These cases usually occur when there is very heavy rain, and during the three-hour interval, the weather conditions do not improve. Therefore the track is not safe enough to race, either due to poor visibility or very wet.

A perfect example is the past Belgian GP, which has become the shortest race in history due to heavy rain. The drivers only completed four laps behind the Safety Car, as visibility was very poor and track conditions very dangerous, and they did not improve in three hours.

How Often Are Red Flags Shown In F1?

Red flags are not very common. Normally, when there is a crash, the yellow flag is shown, or the Safety Car goes out, and the same happens with the rain, as there are usually not many races with rain, and it is less common for it to do it with too much intensity.

Since the first F1 world championship in 1950, there have been more than 1000 races, and red flags have been shown in 78 of them. A total of 26 races were restarted on the first lap, while 13 Grands Prix were not restarted, 9 because of rain and 4 due to crashes involving drivers, and another 5 races were stopped due to incidents that resulted in fatalities.

2021 has been the season with the most red flags in F1 history, with 5 so far (until the Austin GP).

Why Are F1 Drivers Unlapped After A Red Flag?

When a red flag ends, lapped drivers can unlap themselves, so everyone on the grid has completed the same amount of laps when the race is restarted.

This is done mainly for two reasons. The first of them is safety, as it would be chaotic if fast and slow cars were mixed up and had to be lapped again all at the same time.

The other reason is racing spectacle, as it would be more difficult for two drivers to fight for a position if there were lapped drivers in the middle, and it would be unfair to the driver behind.

Everything in Formula 1 is designed to be as safe as possible. Red flags and their duration are, as we have seen, to avoid unnecessary risks and make the races safe while maximizing the show.

Louis Pretoriushttps://onestopracing.com
Previous article
Can You Buy An F1 Car?
Next article
How Do F1 Penalty Points Work?