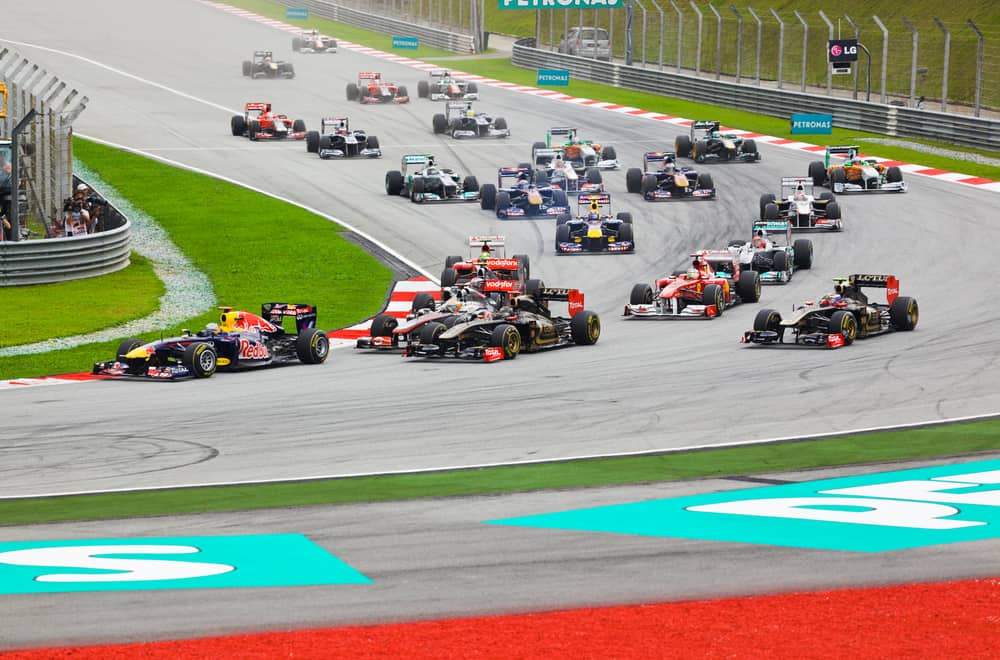 Formula 1 is the most advanced and most prestigious event in motorsport. There are millions of F1 spectators all over the world, but a question that is often is how long is an F1 race? The F1 race lengths and times always seem to fluctuate wildly. Let’s definitively answer the question once and for all!

F1 Grand Prix races must be no less than 305km (189.518 miles) long. The race must be ended after 2 hours of race time unless there have been suspensions. In this case the time limit is extended to 3 hours. The number of laps per race depends on how many laps are required to reach the minimum distance.

Let’s take the time to thoroughly and definitively answer this question. There are many considerations to make with the confusing sport that is F1, but let’s dig deep and all of the possible answers to the question “how long is an F1 race?”

What Distance Does An F1 Race Cover?

The number of completed race laps in Formula 1 fluctuates based on the race circuit. The laps are never the same, and the length of each lap also varies depending on the track. This leads many to wonder how long in distance an F1 race actually is?

Most Formula 1 races must be a minimum race distance of 305km (just shy of 190 miles). The exception is the Monaco street circuit which is roughly 260km long (161 miles) due to the slow lap times of this track.

“The distance of all races shall equal to the least number of complete laps which exceed a distance of 305km.”

“The distance for the race in Monaco shall be equal to the least number of complete laps which exceed a distance of 260km.”

To put it plainly, an F1 Grand Prix must be at least 305km (190 miles) long, 260km (128 miles), and the race circuit must be completed until this distance is reached. This means that some championship races have more laps than others, depending on the lap distance of the circuit.

To better illustrate this, here is a table outlining the total race distances of each F1 Grand Prix in the 2021 race season:

How Long Does An F1 Race Take?

If each Formula 1 Grand Prix race has a different number of laps and covers a unique distance, how long does a championship race take?

The maximum total time period of an F1 championship race must not exceed 2 hours unless the race is suspended due to incidents such as accidents or crashes, in which case the race time may be extended to no more than 3 hours.

There are several clocks keeping time at an F1 championship race, but the only clock that really matters is the total race time.

Formula 1 races can end up being very long due to suspensions resulting from bad weather, accidents, crashes, penalties, infringements, and other situations that require the race to be stopped or slowed down.

Past races have been timed at more than 3 hours due to such suspensions, which is why the time limit was instituted.

“Should two hours elapse before the scheduled race distance is completed, the leader will be shown the end-of-race signal when he crosses the control line (the Line) at the end of the lap following the lap during which the two (2) hour period ended, provided this does not result in the scheduled number of laps being exceeded.”

The only exception to this regulation is if the race is suspended, the suspension period will be added to the total race time not exceeding a maximum total time of 3 hours.

Once the race time of 2 hours has elapsed, the end-of-race signal will be given to the leading driver by way of a flag, and the race will then be completed when that driver crosses the line.

This will end the race even if the total race distance or total race laps have not been completed, and the order in which the drivers cross the finish line will determine the finishing order of the race.

How Many Laps In An F1 Race?

The circuit length of every Formula 1 championship race is different, and the total race length differs from race to race as well. How many laps are completed during the course of an F1 Grand Prix race?

The fewest laps required for an F1 race in the 2021 race calendar is 44 laps at Circuit de Spa-Francorchamps in Belgium, as the circuit length is more than 7km (4 miles) long. This circuit length requires fewer laps to meet the minimum distance requirements for the race.

The most laps required to complete the 305km (190 miles) race distance for an F1 race in 2021 is 72 laps at Zandvoort in Holland. The circuit length of this track is a little over 4km (2.4 miles), which requires a significantly higher number of laps to reach the minimum distance.

Here is a list of the total laps required to meet the minimum race distance for every Grand Prix race on the 2021 F1 calendar:

After the required number of laps have been completed, the race will end as the required total race distance has been met.

How Long Are F1 Race Tracks?

The total laps required to meet the minimum race distance varies from track to track, which leaves us with this question: how long are F1 racing circuits?

The length of a racing circuit is not a set requirement, which allows for the large variety of exciting race tracks that are used in Formula 1.

All of the tracks that are used in the sport are of the best quality and very well maintained. The number of laps that the racers execute on each circuit is dependent on how many laps are required to do travel more than 305km (190 miles).

The exception is the Monaco circuit, which, while it is very short and requires 78 laps to complete, the track is so complicated to navigate well that the lap times are significantly longer than any other F1 circuit, which caused the FiA to reduce the total race distance to about 260km (161 miles).

The total distance of each circuit in the 2021 Formula 1 calendar is:

Why Are F1 Races So Short?

Formula 1 is deemed to be the pinnacle of motorsport, as the vehicle and drivers that compete in the sport are the best in the world. However, there are other motorsports that have far longer races than F1, which leads many to ask why such an advanced racing platform has such short races?

The idea of Formula 1 is to finish the race as quickly as possible. F1 races are more based on a sprint rather than a marathon. The race distance has been set at 305km (190 miles) for decades, but the cars and drivers are completing this distance in less time due to advancements in F1 technology and driver skill.

There are physical limitations that prevent the cars and drivers from competing for longer than the minimum race length.

Formula 1 racing cars have a limited amount of fuel, and the cars are not allowed to be refueled during a race. This limits the distance that the car is able to travel before stopping.

The physical exertion of an F1 driver during a Grand Prix race is so immense that the drivers often lose as much as 4kg (8.8 pounds) of weight during one race. This is due to the intense stresses that the drivers experience while racing and the G-Forces that they are placed under while cornering at high speeds.

These factors, as well as pressures from television networks and spectator engagement, have kept the championship races as short as they are.

Which Is The Shortest F1 Race?

All Formula 1 races are relatively short when compared to other racing events in motorsport, but which is the shortest F1 race?

There are various ways to measure the shortest Formula 1 race, so here is a helpful table listing possibilities:

The question of how long is an F1 race can be answered in several ways. We must consider the total race distance, take into account the fact that Monaco is allowed to be shorter than all other races, single lap length, and overall race time.

These figures fluctuate throughout the entire F1 season, so it is best to keep to the standard figures: a Formula 1 championship race can be no less than 305km (190 miles) and must not last longer than 2 hours (3 hours including time suspensions).

Louis Pretoriushttps://onestopracing.com
Previous article
Ask a Pro: How do F1 Drivers Pee?
Next article
What To Wear To An F1 Race