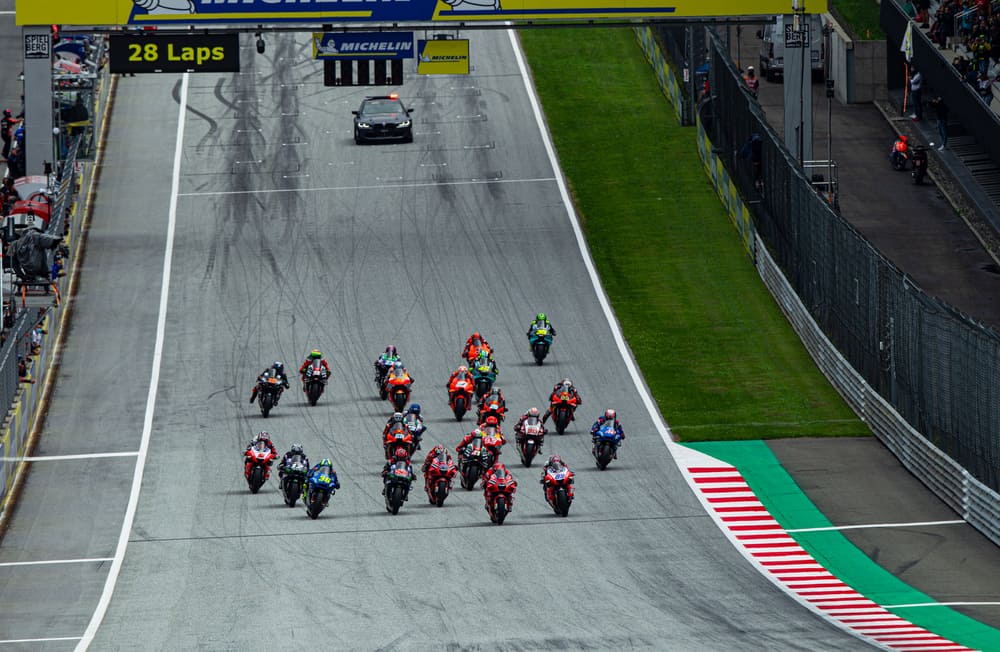 The 2022 MotoGP season is underway, and fans follow the season with excitement. The bikes are lightning fast, and the riders are in peak physical condition to try to get the best out of their bikes. As the bikes line up for the start of the race, you feel sure that there are more bikes on the starting line-up than at the previous race, and you wonder just how many bikes are in a MotoGP race.

Twelve teams are competing in the MotoGP this year, with two riders each, a total of 24. The Fédération Internationale de Motocyclisme allows an additional two wildcard riders to participate per race, which brings the total number of bikes allowed in any MotoGP race to 26.

The number of bikes participating in a MotoGP race will differ from one race to the next as factory teams decide when to race their wildcard riders. Other factors could lead to fewer bikes participating in a race, for instance, if a rider or a bike had to withdraw for some reason. Still, teams usually have replacement riders if a regular rider is unavailable.

How Many Bikes Take Part In A MotoGP Race?

For the 2022 season of MotoGP, there are six constructors and twelve teams participating. Each team has two riders that they enter for the season. Factory teams- teams that belong to constructors- are allowed to enter wildcard riders in races from time to time. However, the FIM limits the number of wildcard riders in any race to two, with a maximum field of 26 racers.

Although each rider typically uses only one bike per race, there is an exception in cases where a race starts in dry weather, but rain starts during the race. As the tires and brakes used in dry and wet conditions differ, a rider may have an identical bike set up for wet weather, which they can switch if it rains.

A maximum of 26 riders can start a MotoGP race. If the race starts in dry weather and it starts to rain during the race, each rider may switch to a bike set up for wet conditions. The highest number of bikes that can be used in any race is, therefore, 52. However, as a rider cannot use two bikes simultaneously, there should never be more than 26 bikes on the track.

What Are Wildcard Riders In MotoGP?

MotoGP further limits the number of wildcards that may enter a race to two, thus limiting the number of riders that could participate in one race to 26. If all these regulations are considered, factory teams must carefully plan when they will use their wildcards. Teams usually agree with wildcard riders about which races they will participate in before the season starts.

How Many Bikes Take Part In A Moto2 Race?

One of the other Grand Prix Motorcycle Racing classes is known as Moto2. Although the rules for MotoGP and Moto2 are very similar, there are a few apparent differences, the most obvious being the engines used. In Moto2, all bikes use the Triumph 765cc engine, while the MotoGP engines may not exceed 1000cc that are developed and manufactured by six different constructors.

Another big difference between the two formats is the number of teams and riders competing in the Moto2. While MotoGP has twelve teams with two riders each, Moto2 has a total number of fifteen teams. With two riders per team, that increases the field for a Moto2 race to 30 riders. As all the bikes in a Moto2 race use the same engine, the competition between the riders is fierce.

Moto2 regulations also allow teams to enter a few wildcards during the season, which could further increase the number of bikes competing in any race. The number of wildcards allowed per race is also limited to two, thus increasing the possible field to a maximum of 32 bikes per race. Only existing Moto2 teams may enter a wildcard.

How Many Bikes Take Part In A Moto3 Race?

Moto3 is another class participating in Grand Prix Motorcycle Racing. Moto3 rules are similar to MotoGP and Moto2, with the most significant difference being that Moto3 engines are limited to a maximum of 250cc. Unlike Moto2, where all bikes use the same engine, five constructors participate in Moto3, each responsible for developing their engines.

Just like Moto2, fifteen teams are competing in Moto3. Each team has two riders, meaning a total of 30 riders and bikes participating in a Moto3 race. Teams in Moto2 are also allowed wildcard entries. As with MotoGP and Moto2, wildcard entries per Moto3 race are limited to two, limiting the maximum number of bikes in a race to 32.

What Is A Replacement Rider In MotoGP?

Any team participating in Grand Prix Motorcycle Racing may have one or more replacement riders, regardless of their participating class. Replacement riders are used to race in the place of one of the team’s regular riders if they are unavailable due to any valid reason, like illness, injury, etc.

It is important to note that using a replacement rider will not increase the number of riders or bikes participating. As they will be racing in the place of a regular rider, they will be one of the team’s two riders participating in that specific race. If the team uses a wildcard in that specific race, they may have three riders, but one should not confuse the replacement rider with the wildcard.