How Many Engines Can F1 Use? 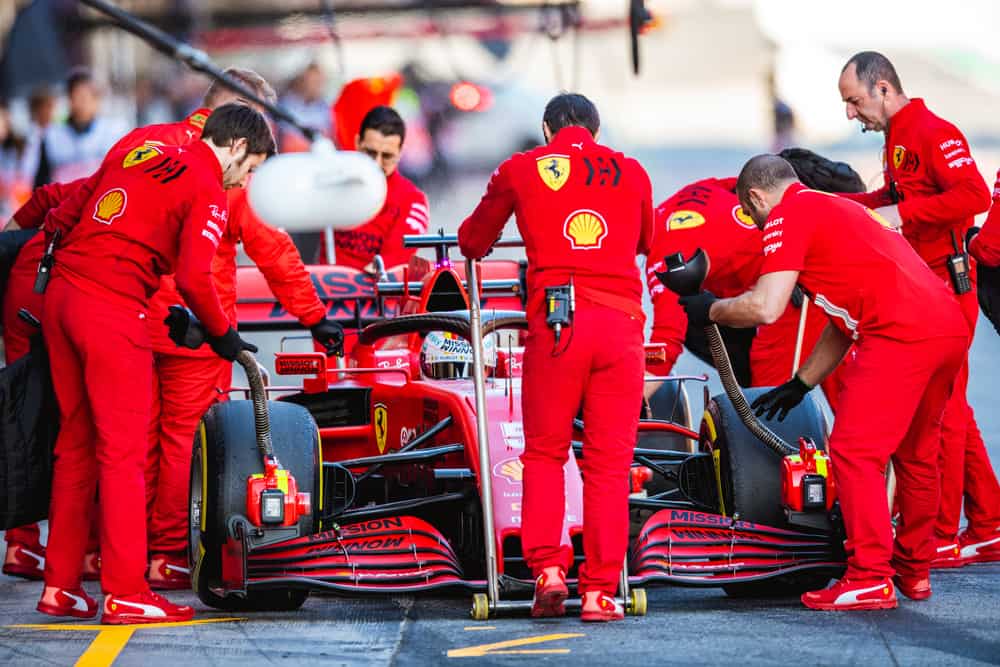 The current F1 engine rules dictate that each F1 car can use three Internal Combustion Engines for the whole year. The internal combustion engine is the main part of an F1 engine, so teams can use three per season.

When it comes to the rest of the engine components, teams can use three MGU-Hs, Turbochargers, MGU-Ks. However, they can only use two energy stores and two control electronics.

The reasons for this may not be quite as simple as you might expect. F1 legislation is pretty extensive on this, and this brings in some interesting consequences.

How Many Engines Can F1 Use?

In total, throughout a season, each F1 team can use three engines per car. This means that they get to use three of each major engine component—these components being the Internal Combustion Engine, MGU-H, MGU-K, and the Turbocharger.

The rules are slightly different for the components of the ERS system, which is the energy recovery system. This is the system in the car which provides a boost when engaged by the driver, and it recovers energy during braking.

These components are the energy store and the control electronics. These two components have a limit of two on them, meaning they can only be changed once. These are regulations introduced by the FIA.

Why Is There A Limit On Engines In F1?

The most recent engine limit was introduced in 2014 when Formula One engines were changed from 2.4-liter V8 engines to 1.6-liter V6 engines, the first hybrid engines introduced to the sport. It was a huge change for Formula One and brought about some new regulations on how many engines each driver can use.

It was also the first time the engine was looked at as different components, as it makes it a lot easier for F1 teams when they only have to change one component. They can continue using the same components. There is a limit on the number of engines a car can use for a few different reasons.

The first is that it helps bring down production costs to teams buying engines and the ones making them. Teams at the bottom of the grid-like Haas and Williams have often struggled with having much smaller budgets than the teams at the front like Mercedes and Red Bull.

Another reason for this limit is so that drivers and teams take care of their engines. When the limit was much higher, drivers would push their engines to the limit and not have to worry about durability because they could replace their entire engines every other race.

The limitation means that drivers have to be a lot more cautious with their engines during practice and races, as they know it will cost them if they go over the limit of engines allowed.

This can make the racing much more interesting, as you may often see a driver who has pushed his engine too hard at the start of the season struggle at the end of the season as the engine struggles with increased wear that other drivers aren’t seeing. It brings a lot more strategy and thinking into the sport, which some fans love, and others hate.

Why Do F1 Teams Change Engines?

The most common reason for F1 teams changing their engines is wear. As an engine is used more and more throughout the season, it begins to wear down more and more. As the engine and its components wear down, they begin to have a much-decreased power output. This is simply because the engine becomes less efficient the more it is used, making it slower in top speed and acceleration.

This means that F1 teams want to change their engines as much as possible, as new engines give the best performance. This is part of why F1 has put a limit on the number of engines a team can use because F1 knows that in an ideal world, each team wants to use as many engines as possible. F1 teams change engines because of poor performance from the engines.

Sometimes Formula 1 teams are forced to change engines because there is damage beyond use. Sometimes, when a car gets into a large accident, the engine will be damaged. They are pretty well protected, but when the force of 10+ G is put through the sidepod, it can break and cause damage to the engine, making the engine not usable.

This forces a team to change the engine. It is what happened to Max Verstappen and his car after the 2021 British Grand Prix. His crash with Lewis Hamilton caused his engine to be unusable, so it had to be changed.

What Happens If You Go Over The Engine Limit?

Using more than the permitted number of engines in a season will, of course, bring penalties with it. If you go over the limit for engines, it comes with a 20 place grid penalty. This is a penalty applied to all cases, even if you have only used 4 of 1 component of the engine.

The penalty also does not cease if the replacement in the engine was not your fault. Using Max Verstappen as a good example again, he was still given a 20 place grid penalty for using his fourth engine in the 2021 Russian Grand Prix. This was despite having to change engines after the crash at the 2021 British Grand Prix. It means drivers will have to be careful with their engines, as they can still be punished even if the engine change is not their fault.