How Many Laps Are MotoGP Races? 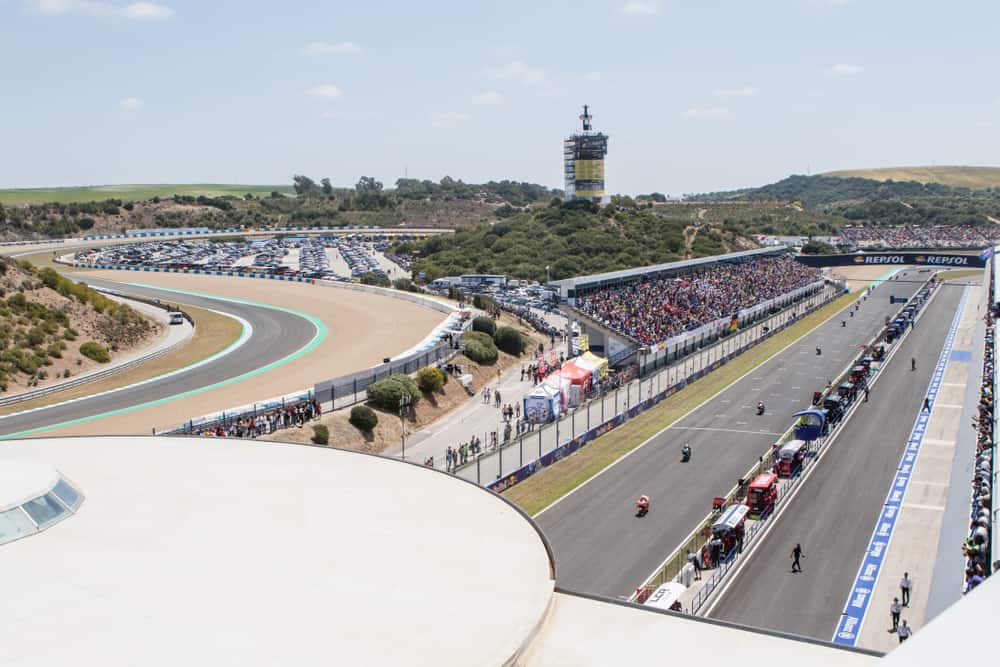 At a MotoGP race, you have ten seconds to enjoy the thrill of watching the rider on the bike when he passes in front of the stand. Around twenty-four riders will pass you while you watch. How often will they go around the track at a Moto GP race?

There are 20 to 30 laps in a MotoGP race. Each racing circuit determines its own number of laps. A MotoGP race is between 60 and 80 miles (100 to 130 kilometers) and lasts about 45 minutes. At each race circuit, the race laps usually stay the same from season to season.

A MotoGP racer will go as fast as a Formula 1 racing car at top speed. It is exhilarating to see the riders chase one another, lean close to the ground as they turn, and try to outmaneuver each other. If you follow the MotoGP season, you will see various race lap durations, Long Laps unique to MotoGP, qualifying laps, and some lap changes coming for the next MotoGP season.

The Number Of Laps At A MotoGP Circuit

Moto GP races are held each year at international racing tracks. The race circuits vary yearly and are determined according to sponsorships, availability, and popularity. There are races held in Qatar, Indonesia, Japan, Argentina, the United States, The United Kingdom, Spain, and France, to name a few. Some countries host more than one MotoGP race in a season.

The number of laps for any specific MotoGP race is determined by the MotoGP Permanent Bureau. The Permanent Bureau consists of two racing officials; one from the Fédération Internationale de Motocyclisme and one from Dorna.

The Fédération Internationale de Motocyclisme is the international governing and sanctioning body of MotoGP. It represents 116 motorcycle federations that are divided into six regional unions. Dorna owns the commercial rights to MotoGP.

Each lap is about 3 miles (about 5 kilometers) long. Each race is a sprint with no stops for fuel or tire changes. The number of laps stays the same at each circuit from season to season. Sometimes, the race is shortened if the weather results in dangerous riding conditions or accidents.

Here are some of the major races and the number of laps in each race:

Circuit of the Americas, the United States 20 laps

Race officials can change the number of laps for a race at short notice. Recently authorities reduced the scheduled 27 laps of the Pertamina GP of Indonesia to 20 laps due to concerns about high temperatures.

How Many Qualifying Laps In A MotoGP Race?

MotoGP starting grids are laid out in rows, and each row consists of three riders, separated from the next row by 30 feet. The rows are step-like, so the fastest qualifying riders get the top positions.

The number of laps around the track is the same as the primary race. Riders have three qualifying rounds, at the end of which a first ranking is established. These initial rounds are around forty-five minutes each. After that, there is a shorter session with less laps of thirty minutes.

What Is A Long Lap In Moto GP?

The Long Lap is a penalty system devised by MotoGP authorities in 2019. It penalizes riders for race infringements during the practice sessions and the actual race.

At each circuit, the race authorities choose a corner with an additional longer route marked along the outer edge of the track. If a rider receives a Long Lap penalty, he needs to take this penalty route, effectively giving him a longer race distance to cover and potentially a slower finish time.

While a Long Lap increases the time it takes for a rider to finish the race, it does not increase the number of laps he needs to complete. The amount of laps of the specific race stays the same.

How Many Laps Do MotoGP Fans Want?

In 2022 a Global MotoGP fan survey was conducted, which drew responses from more than 100 000 MotoGP fans worldwide.

According to fans, the five most important MotoGP races are Mugello in Italy, Assen in The Netherlands, Phillip Island in Australia, Jerez in Spain, and Misano in Italy. Fans also said what the essential elements of MotoGP are. They like the exciting racing, close competition, on-track action, and overtaking among the best riders on the fastest bikes.

Significantly, 85% of the fans want the race to last between 40 and 60 minutes, which mirrors the existing race length across the international circuits.

What Changes Are Coming To The Lap Duration Of MotoGP?

The racing authorities recently decided to introduce shorter sprint races in the coming season to the MotoGP circuit to increase the spectator value and interest in MotoGP.

Sprint races will cover half the distance of the primary race. For example, where the Qatar Lusail International Moto GP race consists of 20 laps, the sprint race will run over 10 laps. Sprint races are scheduled for the Saturday before the main event on Sunday.

MotoGP race laps vary between 20 and 30 depending on the circuit. A Long Lap is a penalty whereby a rider has to complete a longer marked lap around the track. All riders must participate in the qualifying laps before the Sunday GP race.

According to a recent survey, MotoGP fans are satisfied with the duration of a MotoGP race. From next season, an exciting new addition to MotoGP will be added. The Saturday sprint races cover half the distance of the primary Grand Prix race.