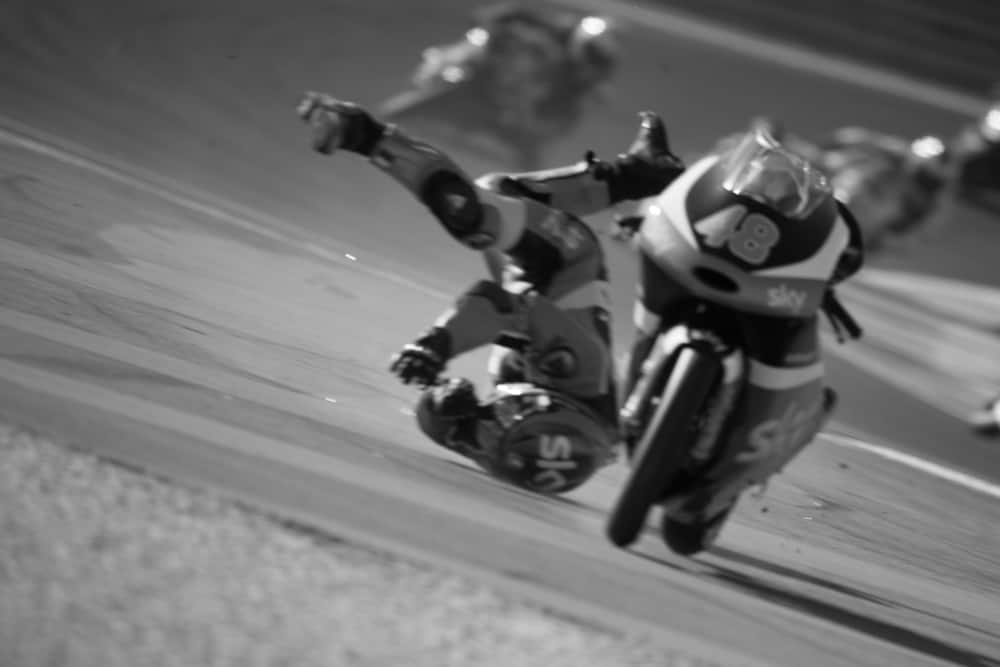 MotoGP has a long history of crashes, driver injuries, and unfortunate deaths. Compared to motorsports with four wheels – NASCAR has 29 fatalities – the risk of serious injury multiplies when you are on a racing motorcycle. How many MotoGP drivers have died since its inception?

Even with all the added rider safety equipment, and increased measures to make the racing circuits safer, when a motorcycle racer falls from their bike, it’s up to fate to decide if they will ride again. It’s one thing falling from your bike, and momentum takes you into a safety barrier. It’s another thing when you fall in the middle of a racing pack, being hit by steel machines at a tremendous pace.

Safety measures have helped to minimize the death of the riders in recent decades, and long may it continue. As exciting as motorcycle racing is for both the driver and the spectator, it remains one of the most dangerous motorsports in the world.

When a driver is flung from his bike, it’s him against concrete, gravel, and worst of all, fellow competitor bikes. A racing suit and helmet can only offer so much protection. Sadly, when a fellow rider drives over you, it will feel like you aren’t wearing any protection.

MotoGP Drivers Who Have Died In 1949

The first official MotoGP death was recorded on June 13, 1949, on the Isle of Man, involving Ben Drinkwater from the UK. The accident occurred in the very first race of the brand-new FIM World Championship – the Isle of Man TT – when Drinkwater fatally collided with a barrier close to the 11th milestone marker post.

Today, an S-bend corner, close to the accident location on the famous Mountain Course, is known as “Drinkwater’s Bend” in honor of the first man to lose his life in MotoGP. A total of 3 MotoGP drivers died in 1949. The year MotoGP was born.

David Whitworth was the first casualty of the 50s when he and Charlie Salt managed to crash into each other during the 1950 Belgian Grand Prix held at Circuit de Spa-Francorchamps. Whitworth fractured his skull, died the next day, and was buried in the local cemetery in Spa as he “wished to be buried close to the scene of any fatal accident.”

MotoGP racing deaths in the 60s were on par with the 50s, claiming 27 lives. Again, the track responsible for the most deaths was the now notorious Isle of Man TT. This decade of motorcycle racing notably claimed the life of female driver Marie-Laure Lambert.

Sidecar driver Claude Lambert and his passenger, wife Marie-Laure Lambert, entered the 1961 Isle of Man TT in their BMW sidecar. Unfortunately, the pair crashed at the 35th-mile marker Gob-ny-Geay, and Marie-Laure died from her injuries.

Another decade of motorcycle racing meant another 24 motorcyclists dead. The Isle of Man TT claiming 11 riders was expected when looking back at previous decades of racing at this extremely dangerous race.

After the death of one of the most talented riders of his era, Finnish rider Jarno Saarinen, at the 1973 Nations Grand Prix (Italy), increased demands for better safety conditions for all motorcycle racers who competed in world championships intensified.

Saarinen became an inductee of the FIM MotoGP Hall of Fame in 2009, and to this day, he is the only Finn to have won a motorcycle road racing championship (250cc class in 1972.) He finished second to 15-time Championship winner and biking legend Giacomo Agostini during the year before his untimely death.

During the 80s, the motorcycle racing community experienced fewer deaths than in the preceding decades, which could be because the Isle of Man TT was removed from the IFM roster in 1976, being handed to the United Kingdom after safety concerns (took them long enough!). The British Grand Prix replaced the Isle of Man TT.

MotoGP legend Giacomo Agostini started to protest in favor of the removal of the Isle of Man TT in 1972 and stated “he would never race again at the Isle of Man” before declaring it too dangerous a track for international competition. Agostini believed it was outrageous that professional riders were forced into competing there.

Modern-day MotoGP legend Valentino Rossi, who did a lap on the famous course, stated: “I did a lap of the Isle of Man, and I understand why people love this because it’s f**king awesome. It’s unbelievable, great. But, unfortunately, it’s too dangerous. Sometimes, riders are crazy.” And we all know Rossi was not the type to scare easily.

As you may have noticed, the number of deaths in MotoGP has drastically decreased compared to previous decades. The lower mortality rate is due to many factors, such as protective riding gear and upgrading safety at most circuits.

On October 23, 2011, a collision occurred between Colin Edwards and close friends Valentino Rossi and Marco Simoncelli in the Malaysian Grand Prix. Simoncelli lost control of his bike, sliding in the direction of the gravel. What happened next will haunt many a MotoGP rider and fan for many years.

Simoncelli’s tires suddenly regained traction, making the bike change direction into the path of oncoming traffic. While Simoncelli was hanging onto the right side of the bike, he was hit by Edwards before Rossi hit him in the head area. No rider had any chance of missing Simoncelli, who died half an hour later in the circuit’s medical center.

Alarmingly, there have been three recent deaths that rocked the motorcycle world to its core, involving very young drivers:

The circumstances and age of the drivers have led to safety concerns going forward. The FIM responded by introducing safety reforms:

All racing has an element of risk, and the drivers get paid to consider that risk. The risk of being a motorcycle racer is that your chance of dying on the track is higher when compared to most other racing sports. This element of danger is what makes motorcycle racing so intriguing.