How Much Do F1 Mechanics Make? 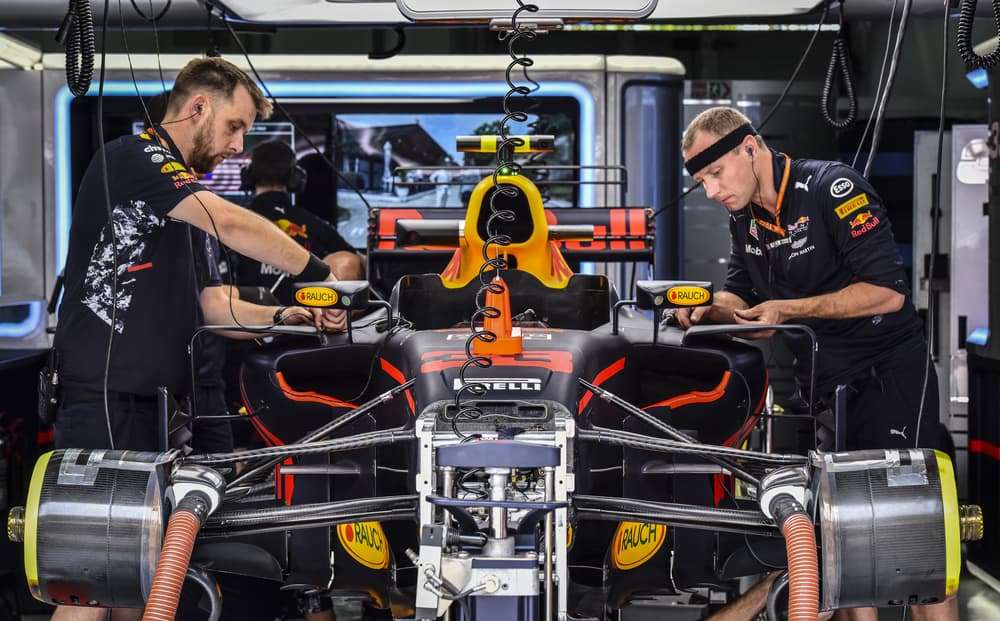 Mechanics in Formula 1 are very high-value crew members, but they are not always the highest-paid members of the crew. Many other crew members earn more than mechanics, despite the vital role that mechanics play. Let’s examine how much F1 mechanics make, why they earn what they do, and what their job entails.

How Much Do Formula 1 Mechanics Earn?

F1 mechanics are vital crew members that build the F1 cars used by the drivers, they keep the cars running as they should during the race season, and they perform repairs and component changes throughout the racing year. These are clearly very important people in an F1 team, but how much do they make per year?

The salary of an F1 mechanic varies depending on several factors, but the average salary for an F1 crew mechanic is roughly $40 000 per racing year. This is a somewhat decent salary, but there are other crew members that earn more than mechanics, surprisingly.

The figure that F1 mechanics earn is directly based on their skill level and their work experience in Formula 1. A mechanic who is very experienced and who does consistently good work will be paid more than a mechanic on their first Grand Prix tour.

The upper limit of what crew mechanics in F1 earn is roughly $60 500 per race year, and the lower limit is around $20 400 per year. The mechanics get paid per race event, and that figure is accumulated over the racing season.

There is one exception, however, which is the Chief Mechanic. The Chief Mechanic is a senior member of the F1 team and decides on the mechanics that the team employs, and generally manages everything to do with car maintenance and construction, including personal.

Chief Mechanics are very well paid and can earn between $800 000 and $1 000 000 per racing year. Every mechanic is offered pay incentives for good performance and race wins, which adds to their total salary at the end of the season.

Why Do F1 Mechanics Earn What They Do?

Formula 1 mechanics are clearly very important members of every F1 crew, so why are they not among the highest-paid members of the crew?

The crew mechanics in F1 are well compensated as they progress in their careers, even though their starting salaries are not particularly high. The higher-paid mechanics do earn more than many other crew members, but the least paid mechanics are not even in the top half of the highest-paid employees.

This is mainly because the mechanics on an F1 crew are sent all over the world with the racing team. This means that the mechanics travel through seven continents and have all of their accommodation, food, transport, and travel costs entirely covered.

This adds up to quite a perks package that every mechanic gets to enjoy. It must be said that an F1 Grand Prix tour is no vacation for a crew mechanic, but the travel is a big perk of the job.

What Determines How Much F1 Mechanics make?

In general, the determining actors that decide how much a mechanic makes comes down to experience, work performance, expertise, and their rank or position within the crew.

The Chief Mechanic ears significantly more than other mechanics, but the Chief is not a hands-on mechanic and operates in the position of the director rather than a crew mechanic.

Crew mechanics that have been working faithfully and effectively for a team for a long time are given more responsibilities and are accountable for more important work. This equates to a higher salary than more junior-level mechanics.

Newer or younger mechanics tend to be less experienced, make more mistakes, and are not yet trusted with more essential tasks and jobs. This equates to a lower salary, but every mechanic has the opportunity to rise through the ranks and earn more along the way.

What Does An F1 Mechanic Do?

Formula 1 mechanics fill various roles within the team, but their obvious primary function is car maintenance, repair, and construction.

The crew mechanics that tour with the F1 race team is charged with performing any damage repairs that are necessary throughout the season. This is primarily structural and mechanical repairs, as there are separate teams from aerodynamic components and tires.

Formula 1 mechanics are essential for a successful Formula 1 race season, regardless of the team. These crew members repair the cars, build the cars, and change out the necessary parts along the way.

Chief Mechanics can earn up to $1 000 000 per year, but these are highly specialized crew members and senior members of the overall F1 team.

Louis Pretoriushttps://onestopracing.com
Previous article
How Much Do F1 Cars Cost?
Next article
How Safe Are F1 Cars?